Nelson Cruz is the big-bat, big-name DH headed to the Washington Nationals at age 41, pending the successful completion of a physical exam. He’s expected to protect NL MVP runner-up Juan Soto in the lineup — and offer other sorts of help away from the field.

Indeed, Cruz is hardly the only experienced player Washington general manager Mike Rizzo has worked to bring aboard as spring training gets underway for his youngster-filled club in West Palm Beach, Florida.

That includes some familiar faces who were part of the team’s 2019 World Series championship: left-handed reliever Sean Doolittle, whose official acquisition also was pending a physical; right-handed starter Aníbal Sánchez, who didn’t play last year but got a minor league deal; and outfielder Gerardo Parra of “Baby Shark” fame, who was among the 22 non-roster invitees announced by the Nationals on Monday.

That’s all by design, of course.

“I like the balance of what we’re doing right now. These guys have had success. They understand the game. We’re bringing a guy in — hopefully he passes his physical — that can really teach our guys how to really work an at-bat. And that’s going to be great for our young players,” manager Dave Martinez said, making sure to avoid mentioning Cruz by name.

“With Aníbal, he’s a guy that’s been around and understands how to pitch, but another guy that understands how important it is to throw strikes and that’s what we’re trying to teach our young pitchers. So he’s going to help out a lot,” Martinez said. “And Doo’, the experience that he has in the bullpen, he’s going to help out guys like a (reliever Tanner) Rainey and some back-end-of-the-bullpen guys.”

As for Parra, Martinez said: “We all know what he can do in a clubhouse.”

The manager also was happy to have a visit from former Nationals starter Livan Hernandez on Monday. And Ryan Zimmerman, who retired last month, is expected to spend time with younger players beginning on Tuesday.

Rizzo and Martinez do have Soto, still just 23 himself, to build around.

But beyond the 2020 NL batting champion, there is not a ton of proven talent with lineup spots assured as an abbreviated post-lockout camp begins and opening day on April 7 quickly approaches.

That’s in part a result of the roster being broken up around the trade deadline last year during what would be a second last-place finish in a row in the NL East.

“What I’d like to see is the progression of our young players. I think that’s an important part of our process here,” Rizzo said Sunday. “We need to get our young players competing at championship-caliber performances. To me, that’s our No. 1 priority.” 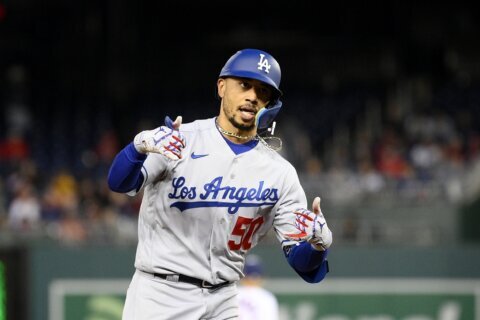