MESA, Ariz. (AP) — Carlos Correa hit his first spring homer with the Twins, providing a preview of what he could provide Minnesota’s lineup this season.

The 27-year-old turned on a 1-0 pitch against the Tampa Bay Rays on Tuesday, launching a no-doubt solo drive that landed well beyond the left field wall.

Correa was among the biggest names on the free agent market in March and it was a surprise when the mid-market Twins swooped in and added the star shortstop with a $105.3 million, three-year deal. He hit .279 with 34 doubles and 26 homers last season for the Houston Astros.

Also in Grapefruit League action, Astros ace Justin Verlander was impressive with four scoreless innings against the Washington Nationals. He struck out six, gave up two hits and walked one.

Verlander missed all of last year, including the Astros’ run to the World Series. The two-time Cy Young Award winner had Tommy John surgery soon after pitching in July 2020 in his first start of the pandemic-shortened season.

The Arizona Diamondbacks have decided to anchor their offensive future around Ketel Marte’s ample talents.

The club announced that it had finalized a $76 million, five-year contract with Marte that begins in the 2023 season and includes a team option for the 2028 that could be worth up to $13 million.

“I don’t think it’s lost on anyone that he’s our best player,” general manager Mike Hazen said. “We have talked about what we need to do to win, and turn around from where we are today, and you do that with elite players.

The 28-year-old Marte has clearly been the D-backs’ best hitter over the past few seasons. The only problem has been keeping him on the field. Marte batted .318 with 29 doubles and 14 homers last season despite being limited to 90 games because of hamstring injuries.

Corbin Burnes’ Cy Young Award-winning performance last year has resulted in him getting the opening day assignment for the Milwaukee Brewers this season.

Brewers manager Craig Counsell announced that Burnes would start the Brewers’ April 7 opener against the Chicago Cubs at Wrigley Field. The Cubs haven’t yet named their starting pitcher for that game.

Burnes, 27, has been one of baseball’s best pitchers the last two seasons after struggling through a difficult 2019 campaign.

This will be Burnes’ first opening day start.

The Chicago White Sox added to their outfield depth, acquiring Adam Haseley in a trade with the Philadelphia Phillies.

Chicago sent minor league pitcher McKinley Moore to Philadelphia for Haseley, a .264 hitter over parts of three big league seasons. Outfielder Blake Rutherford was designed for assignment by the reigning AL Central champions to make room on their 40-man roster.

The White Sox lost Andrew Vaughn on Sunday when he got hurt making a diving catch in the outfield. The 23-year-old Vaughn, the No. 3 pick in the 2019 amateur draft, was diagnosed with a hip pointer, but he could start playing in games again in one to two weeks. 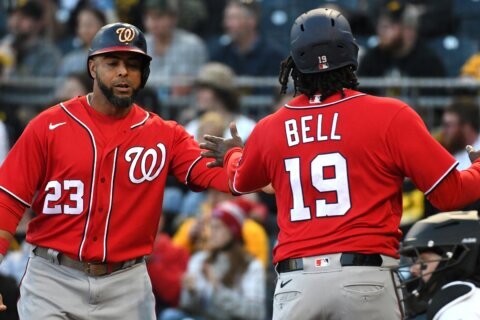 Stock up, stock down for Nationals at quarter-mark of 2022 season