Christian Vázquez tripled home the tiebreaking run in the ninth inning and the Boston Red Sox moved to the brink of a postseason berth with a 5-3 win over the Washington Nationals on Saturday.
Listen now to WTOP News WTOP.com | Alexa | Google Home | WTOP App | 103.5 FM
(1/6) 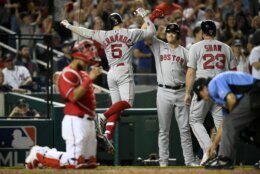 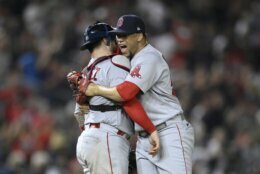 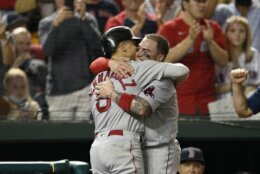 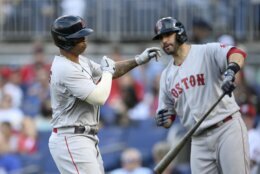 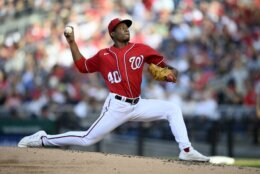 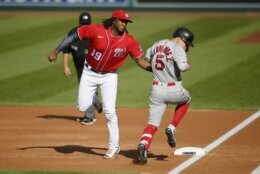 WASHINGTON (AP) — Christian Vázquez tripled home the tiebreaking run in the ninth inning and the Boston Red Sox moved to the brink of a postseason berth with a 5-3 win over the Washington Nationals on Saturday.

Boston is tied with the Yankees for the top AL wild card entering the final day of the regular season. The Red Sox will send ace Chris Sale to the mound Sunday needing a victory to punch a playoff ticket. If they win, they’ll host Tuesday’s wild-card game regardless of New York’s outcome because Boston won the season series 10-9.

“We know what that means if we win,” Boston manager Alex Cora said.

If the Red Sox lose Sunday, they will still be assured entry into a tiebreaker game Monday. The Red Sox are a game ahead of Toronto and Seattle.

Tanner Houck pitched five perfect innings, striking out eight, but Washington tied it at 1 in the eighth inning on Juan Soto’s long, bases-loaded sacrifice fly to center off Austin Davis (1-2).

J.D. Martinez led off the ninth with a walk for Boston, and Vázquez drilled a ball to right off closer Tanner Rainey (1-3) that easily scored pinch-runner José Iglesias for a 2-1 lead with two outs. Travis Shaw singled to drive in Vázquez, then Kiké Hernández homered into the Boston bullpen against Mason Thompson to push the lead to 5-1.

Washington’s Andrew Stevenson hit a two-run homer in the ninth before Hansel Robles finished the game for his 14th save.

The Nationals loaded the bases with one out in the eighth after center fielder Hunter Renfroe lost a fly ball in the twilight, leading to a double, and Adam Ottavino walked two. Soto hit a soaring ball to deep center to tie it, but Josh Bell followed with a soft lineout to end the threat.

Soto said he thought Davis was “lucky” the ball was an out instead of a grand slam. Soto also said Davis was “talking trash” during the at-bat.

Rafael Devers’ 36th homer of the season put Boston in front 1-0 in the fourth. Devers struck out against Rainey with the bases loaded and two out in the eighth.

Houck zipped through the Nationals’ lineup, needing just 53 pitches to strike out eight among the 15 consecutive outs he recorded. Washington hit one ball out of the infield before Houck was lifted for pinch-hitter Christian Arroyo in the sixth.

Houck, a 25-year-old rookie, twice threw 90 pitches among his 13 starts this season. Both came in late August. He had not thrown more than 42 pitches in his last three appearances, all of which were in relief.

Before the game, Cora said there were no limitations on Houck, who pitched five innings three times earlier this season. He pitched into the sixth once, on Aug. 29.

“Didn’t struggle at all,” Cora said of the decision to remove Houck. “(Saturday) actually the plan was to see where Soto was and see where we went. He did an amazing job.”

“I’d much rather this team get a win and continue to go forward,” Houck said of the decision.

Gerardo Parra’s pinch-hit single in the sixth against Garrett Richards produced the Nationals’ first baserunner. Washington loaded the bases with two out in the seventh against Ryan Brasier, who was pitching for the fourth consecutive day, before Jordy Mercer struck out looking to end the threat. Mercer was ejected for arguing plate umpire Phil Cuzzi’s call.

Nationals manager Davey Martinez said Saturday pitching coach Jim Hickey, who Washington hired in the 2020 offseason, will return for the 2022 season. Hickey and Martinez had a previous relationship from working together in Tampa Bay from 2008-2014. The Nationals entered play on Saturday 24th in team ERA.

Red Sox: RHP Garrett Whitlock (right pectoral strain) was not activated Saturday after throwing a bullpen session Friday. Whitlock may be activated Sunday depending on how he recovers, according to Cora.