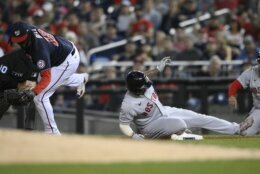 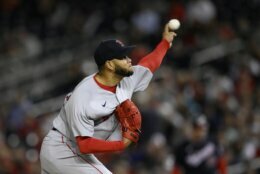 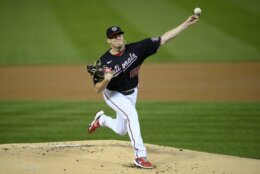 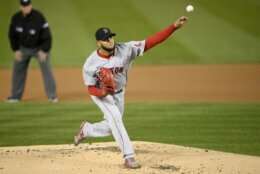 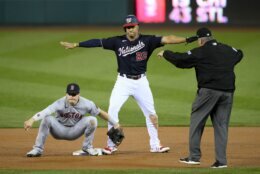 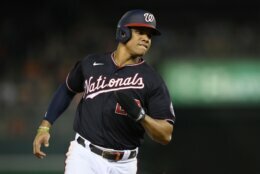 WASHINGTON (AP) — Staggered down the stretch in their push for a postseason spot, the Boston Red Sox used two mighty punches to gain ground in the AL playoff chase.

Hunter Renfroe and Bobby Dalbec hit back-to-back homers during a four-run sixth inning and the Red Sox beat the Washington Nationals 4-2 Friday night to move into the second slot in the wild-card scramble.

Boston won for the second time in seven games and pulled within a game of the New York Yankees for the top wild card after New York lost to Tampa Bay. Toronto and Seattle are one game behind the Red Sox with two days left in the regular season.

“You really want it in a different way, right? That you can breathe and get ready for next week like some of the teams that have clinched already,” Red Sox manager Alex Cora said. “But this is where we’re at and we’ve got to take advantage of every day. Not too many teams can say they’re still in the hunt.”

Struggling to score runs and playing without the designated hitter, Cora loaded his lineup, starting former Nat Kyle Schwarber, Renfroe and J.D. Martinez together in the outfield for the first time, with Dalbec at first base against Nationals lefty Josh Rogers.

The move paid off in the sixth. Martinez singled with one out, putting runners on first and second. Renfroe homered to left-center on a 2-2 fastball.

“Just try to deliver for the team,” Renfroe said. “Not necessarily hit a homer but try to hit a line drive to the opposite field or right center, and he left a fastball over the middle of the plate and I was able to get a good barrel on it.”

Dalbec followed with a solo shot into the Red Sox bullpen to make it 4-0.

Alcides Escobar and Jordy Mercer homered for Washington, which has lost three straight.

Soto walked four times, the 26th game this season he has reached base four times.

“They’ve been pitching around him a lot these last couple of weeks. True to form, he’s going to take his walks, he’s going to get on base,” manager Dave Martinez said. “They’ll make a mistake one of these times this weekend and he’ll hit one hard.”

Schwarber hit 25 homers in 72 games — including 16 in June — for Washington before being traded on July 29th. He was the subject of a video tribute before the game and was applauded before his first at-bat. He went 0 for 3 with two walks.

“Crazy plays today he made. Unbelievable,” Dave Martinez said. “He should be on ESPN and MLB all night long.”

Red Sox: RHP Garrett Whitlock (right pectoral strain) threw a bullpen session. “I believe he’s going (to come out of it) OK and then we’ll decide when to activate him if he’s fine,” Cora said. “Tomorrow, Sunday, whatever it is.” … Cora said LHP Josh Taylor (low back strain) has yet to resume baseball activities.

Nationals: Stevenson started in place of Yadiel Hernandez, who was scratched from the lineup after having a dental procedure. Hernandez grounded out as a pinch-hitter in the seventh.

Red Sox: Cora has not announced a starter for Saturday’s game.

Nationals: Rookie RHP Josiah Gray (2-2, 5.85) has won back-to-back starts after not securing a win in his first 10. He has never faced Boston.