Rafael Devers and the rest of the Boston Red Sox knew going into the regular season's final day that they were in a win-and-in scenario for the playoffs.
Listen now to WTOP News WTOP.com | Alexa | Google Home | WTOP App | 103.5 FM
(1/11) 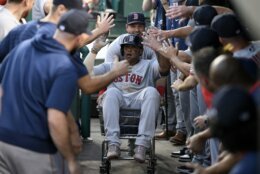 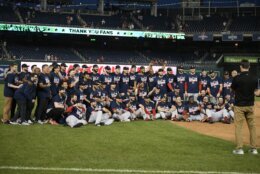 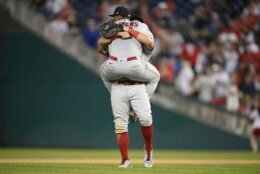 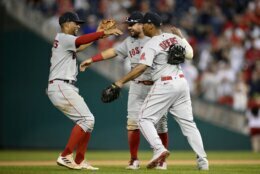 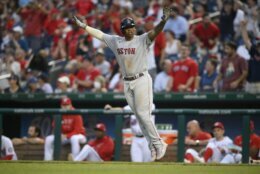 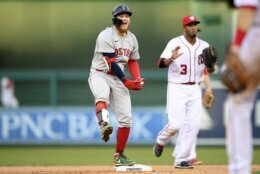 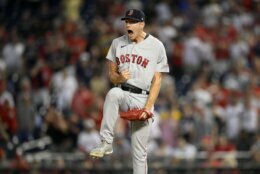 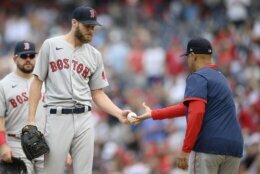 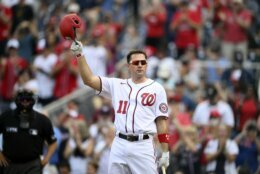 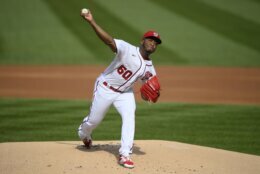 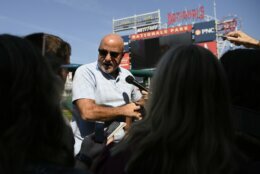 WASHINGTON (AP) — Rafael Devers and the rest of the Boston Red Sox knew going into the regular season’s final day that they were in a win-and-in scenario for the playoffs.

That didn’t make Devers nervous Sunday, even after his club fell behind against the Washington Nationals — and it didn’t stop Boston manager Alex Cora from keeping an eye on the other relevant games.

“It was a tough one, too,” Cora said, “just watching the scoreboard.”

Cora’s return to the job after a one-year suspension will carry into the postseason because Boston earned the right to host the New York Yankees in the AL wild-card game after coming back to beat Washington 7-5 on a tiebreaking two-run shot by Devers in the ninth inning, his second homer Sunday.

“I know that nobody believed in us at the beginning of the season,” Devers, goggles perched atop his head for the playoff-clinching festivities, said through an interpreter. “This is just our first celebration.”

His 38th homer of the season — on a drive to straightaway center off Kyle Finnegan on a 2-1 pitch with one out after Kyle Schwarber reached on an error — capped a four-hit, four-RBIs afternoon for Devers, brought teammates bounding out of the dugout and prompted chants of “Yankees suck!” from some of Boston’s fans who could be heard throughout much of the afternoon in a crowd of 33,986 at Nationals Park.

When it ended, some of those spectators hung around to cheer as Red Sox players gathered in shallow left field for a team picture, wearing blue T-shirts saying, “Built for October.”

One bit of negative news for Boston: Slugger J.D. Martinez left in the sixth inning with a sprained left ankle after stumbling over a base while heading out to play right field for the fifth. Cora said Martinez’s availability for Tuesday was unclear and more will be known Monday.

Cora marveled at Devers’ demeanor — in the clubhouse before the game, when he was playing cards and made a friendly wager with his skipper about a Premier League soccer game, and with a bat in his hands up at the plate.

Boston fell behind 5-1, thanks in part to a shaky start by ace Chris Sale, who went just 2 1/3 innings and was pulled after walking Ryan Zimmerman with the bases full and forcing in a run. Devers led off the fourth with a drive off a 1-2 fastball from Joan Adon, a 23-year-old right-hander who struck out nine in 5 1/3 innings in his major league debut.

Eduardo Rodriguez (13-8) threw a perfect eighth to get the win. Another starter, Nick Pivetta, collected his first save since 2019, striking out Juan Soto to end it.

Finnegan (5-9) entered in the ninth for Washington, which dragged to a last-place finish after shipping away such stars as Max Scherzer and Trea Turner at the trade deadline.

Boston and New York will meet Tuesday to determine which of the rivals takes on the AL East champion Tampa Bay Rays in a Division Series.

The Red Sox and Yankees entered the day tied at 91-70, one game ahead of both the Toronto Blue Jays and Seattle Mariners, so there were plenty of possible scenarios. New York edged Tampa Bay on Sunday 1-0; Boston won the season series from the Yankees 10-9, so gets to be at home.

Red Sox: RHP Garrett Whitlock was reinstated from the 10-day injured list after being out with a strained right pectoral muscle.

Nationals: INF Luis García went on the 10-day IL to make room on the roster for Adon.

Nationals RHP Stephen Strasburg (neck) will begin throwing at the start of November as he returns from thoracic outlet surgery in late July and the team’s “expectation is that he’s going to be pitching to prepare for the … beginning of the season,” GM Mike Rizzo said.

Zimmerman, who turned 37 on Tuesday, hasn’t decided whether to retire. He was removed from the game to a standing ovation and a procession of hugs from teammates and Martinez. … C Alex Avila, 34, got a similar send-off. He has announced his retirement.