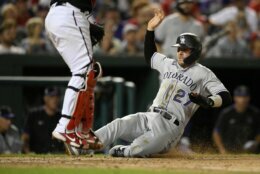 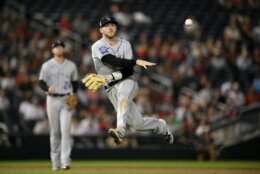 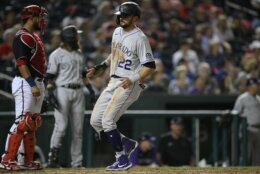 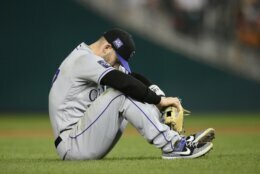 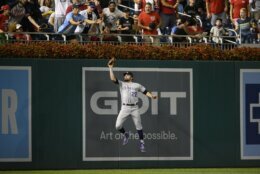 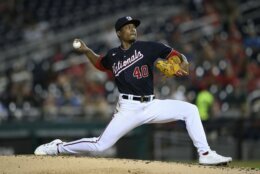 WASHINGTON (AP) — Elías Díaz hit a tying homer and Brendan Rodgers had an RBI single as the Colorado Rockies rallied in the ninth inning to beat the Washington Nationals 9-8 Friday night.

In the series opener between two teams out of the playoff race, the Rockies improved to 6-1 on their road trip.

Díaz connected against Kyle Finnegan (5-8) for a leadoff home run in the ninth that made it 8-all. A single, stolen base, walk and sacrifice set up Rodgers.

Rodgers and Sam Hilliard homered for the Rockies

Trailing 7-6, Nationals pinch-hitter Ryan Zimmerman doubled and scored on a single by Alcides Escobar to tie it in the eighth. Juan Soto walked on four straight pitches by lefty Lucas Gilbreath (2-1) to load the bases and Josh Bell’s grounder put Washington ahead.

Carlos Estévez allowed two singles before getting Lane Thomas on a grounder with runners at the corners to earn his ninth save.

Nationals starter Josiah Gray – still in search of his first win in the majors – allowed five runs on three hits and four walks in 5 1/3 innings. He has given up at least one homer in each of his 11 starts this season, including 14 in nine games with Washington since being acquired from the Los Angeles Dodgers.

“If I get that first win this year that will be a lot of fun and everyone will enjoy it. But if it has to happen next year, so be it. I’m not going to press about that. I have to get to the fifth or sixth if not more and give the team a chance.”

Keibert Ruiz, also sent from the Dodgers to Washington in that deal, had three hits.

The Nationals roughed up Colorado starter Germán Márquez in the fourth for four runs, three on Thomas’ homer for a 6-2 lead.

Rockies: Manager Bud Black said OF Connor Joe (right hamstring strain) might be out for the season. Black had previously been optimistic that Joe would return this season but needed to ‘backtrack’ because ‘hamstrings are tricky’. Joe, who is batting .285 with 35 RBIs, last played on Sept. 3.

Hilliard’s 11th homer of the season in the sixth gave the Rockies a 7-6 lead. In the ninth he singled, stole his third base of the year, and scored the go-ahead run just a few days after losing his father, Jim, to Lou Gehrig’s disease.

Afterwards, his roommate — Rodgers — talked about Hilliard is going through.

“I respect the hell out of him coming back a couple days after it happened,” Rodgers said before choking up himself.

“This is an emotional time for Sam,” Black said.

“I think there’s not better way to honor his family, his father, than going out there and playing baseball the way he plays it. When he performs successfully it puts a lot of smiles on people’s faces,” Black said.

Juan Soto went 1 for 2 to slightly raise his average from .314 to .315. He trails former teammate Trea Turner (.317), who was part of the Nationals big midseason trade with the Dodgers. Another former teammate – Bryce Harper of the Phillies — is at .313.