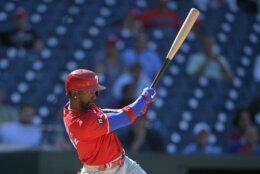 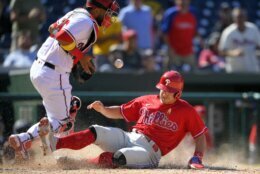 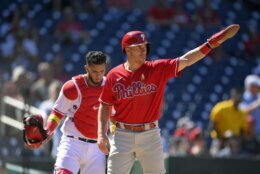 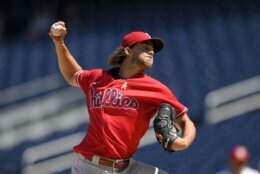 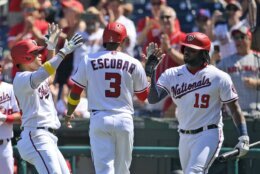 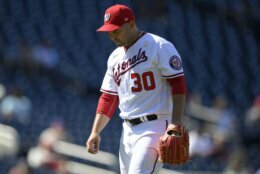 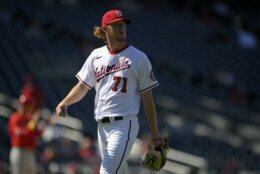 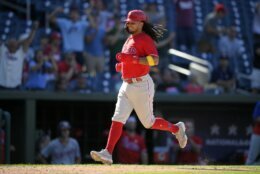 WASHINGTON (AP) — Andrew McCutchen drove in four runs and the Philadelphia Phillies erased a six-run deficit against the Washington Nationals to earn a 7-6 victory Thursday and a three-game series sweep.

The Phillies overcame a disappointing start from Aaron Nola and rallied against the Nationals’ bullpen for their sixth consecutive win. Philadelphia pulled within 1½ games of NL East-leading Atlanta and two games of idle Cincinnati in the race for the second NL wild card.

The Phillies have scored at least seven runs in seven consecutive games for the first time since June 1933.

“We were like ‘Keep it there guys, we’re going to score at least seven, it’s going to happen,’” McCutchen said. “We had some chuckles and some laughs, but we knew we had a chance.”

Juan Soto homered and drove in four runs for Washington, which has lost five in a row and 21 of 27. Lane Thomas also went deep.

García hesitated on Odúbel Herrera’s potential double-play ball a batter later, getting just one out as Marchan came around for the go-ahead run.

“I read the ball in a way that I thought it was possibly going to give me a bad bounce or an in-between hop, so I laid back and made sure I got a good bounce,” García said. “I wanted to make sure I stopped the ball. I didn’t want to give up two runs on that play in case it got by me or got an in-between hop.”

Sam Coonrod (2-2) pitched a scoreless seventh for the win. Ian Kennedy worked the ninth for his sixth save with the Philles and No. 22 for the season overall.

Soto, who went 3 for 4 with a walk, hit a two-run homer in the third and a two-run single in the fifth as Washington built a 6-0 lead.

The Phillies halved the deficit on McCutchen’s three-run double in the sixth. McCutchen drove in seven runs over the final two games of the series, and produced his first back-to-back multihit games since June 18-19.

“It feels good to play like I know I can play,” McCutchen said. “It only took until September. But the past couple games, I’ve been feeling good.”

The Phillies improved to 13-6 against the Nationals this season. They trailed by at least three runs in seven of their victories over Washington, the most such wins ever by a team against an opponent in a single season in the modern era, according to STATS LLC.

“I think what it continues to show is we always have a chance to come back, and that’s important to teams to have that feeling,” manager Joe Girardi said. “Yeah, you can get down, but get a couple guys on, see what happens, Cutch comes up with the big double that scores three and all the sudden we’re back in the game.”

The game was a makeup of Wednesday’s rainout, when the remnants of Hurricane Ida passed through the Mid-Atlantic.

Nationals: SS Alcides Escobar (bruised left knee) was back in the lineup. He left Monday’s game in the first inning and sat out Tuesday. … C Alex Avila (calf strains) was activated from the injured list and LHP Alberto Baldonado was promoted from Triple-A Rochester. Baldonado pitched a scoreless seventh in his major league debut.

Washington manager Dave Martinez underwent a previously scheduled foot procedure Thursday morning and was at the stadium but not in the dugout during the game. The procedure was planned for what originally was an off day for the Nationals. Bench coach Tim Bogar handled managerial duties in Martinez’s place.

Nationals: LHP Sean Nolin (0-2, 6.57) makes his fourth start — and third against the Mets — as Washington opens a five-game series against New York. 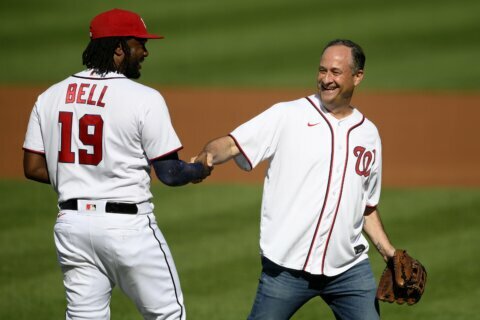