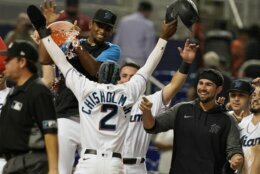 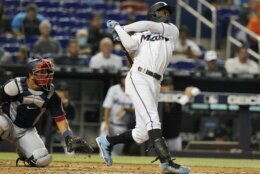 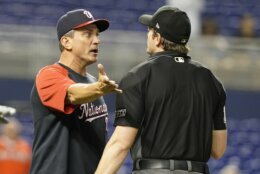 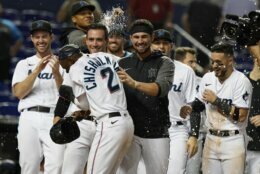 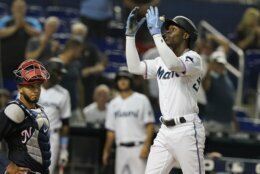 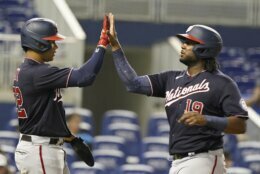 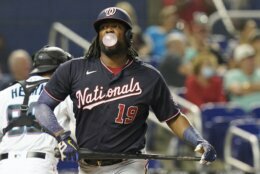 MIAMI (AP) — Jazz Chisholm Jr. homered twice before scoring from third on a wild pitch in the 10th inning and the Miami Marlins beat the Washington Nationals 8-7 Monday night.

After Dylan Floro (6-6) pitched a scoreless top of the 10th, Chisholm took his place at second to start the bottom of the inning as Miami’s automatic runner.

“It’s exciting, I love being on-base with those opportunities where I can run and go hard,” Chisholm said. “As soon as they told me I was on second base, I was so excited to go out there.”

Washington squandered its chance in the top of the 10th after cautious automatic runner Luis García took only one base on Thomas’ double against the right field wall. Floro retired Alcides Escobar on a groundout against a drawn-in infield, Juan Soto was intentionally walked, and García was caught trying for home on Josh Bell’s grounder to first baseman Lewin Díaz.

Nationals Dave Martínez argued and was ejected. Martinez claimed Bell already had crossed the bag when the throw hit Bell and eluded Díaz. He also questioned that the pitch that allowed Chisholm to score hit Brinson first.

“It’s a judgement, I get it, the ball hits him inside the line,” Martinez said. “Come on guys. Use your freaking common sense, one time. They want to keep doing that, put the base on the other side of the line.”

Bell acknowledged that he ran inside the base line.

“I feel like a lot of players do,” Bell said. “My momentum had me in the throwing lane. It’s tough feeling first, and then having a split second and then feeling the ball hit me and getting called out. I guess it makes sense if he catches the ball and I’m safe at first but nothing happens afterwards.”

Crew chief Bill Miller told a pool reporter, “When the catcher threw the ball to the first baseman, Josh Bell was running in outside the runner’s lane, in fair territory, all the way to the base. And he hindered the first baseman’s ability to catch the ball, and that’s how the rule reads.”

Miller also added that the Nationals took longer than the required 20 seconds to appeal the game-ending wild pitch and if León had touched home plate on Bell’s grounder.

“To me it was like a lot that went on there,” Miami manager Don Mattingly said of the double play. “I’m going to stay out of that. I guess the only argument would be that last step. The guy can come into the field because he has to get to the base. Looking at the replay, he was a couple of feet inside the line. That was my perspective watching it on replay.”

Sánchez homered and stunned even himself in the fourth inning when the Marlins right-fielder barehanded Lane Thomas’ fly ball. Sánchez overran the pop up near the foul line and reached behind himself with his right hand to catch it. Sánchez smiled and held up the ball for all to see, including a dejected Thomas.

Miami rallied with three runs in the seventh to tie the game at 7, with Bryan De La Cruz scoring the tying run on shortstop Escobar’s second error of the game.

“It was an interesting game from the standpoint of getting behind and getting back in it,” Mattingly said.

The Nationals snapped a 3-3 tie and chased Miami starter Jesús Luzardo with a three-run fifth. Ruiz hit a two-run single and scored on García’s RBI double.

Miami erased a 3-0 deficit on home runs from Chisholm and Sánchez in the third. Chisholm’s drive put the Marlins on the board, and Sánchez followed with a two-run shot after De La Cruz reached on Escobar’s fielding error.

Chisholm again connected off Fedde in the fifth with his blast over the right-center field wall. He has 17 homers this season.

Ruiz’s two-run single with the bases loaded in the first gave Washington an early lead.

The Nationals padded their advantage on Thomas’ solo shot in the second. Thomas drove Luzardo’s 3-2 pitch over the wall in center for his sixth homer.

Monday marked the fifth-year anniversary of José Fernández’s final game. The Marlins’ ace pitcher threw eight scoreless innings, struck out 12 and got the win in a 1-0 victory over the Nationals. Fernández and two friends died in a boating accident five days later.

“This is a reminder to all of us that knew José to maintain his legacy alive,” Miguel Rojas, the last remaining teammate of Fernadez’s still with the club, told Spanish-speaking media Saturday.

LHP Josh Rogers (1-0, 2.60) will start the second game of the three-game series for the Nationals on Tuesday while the Marlins will go with LHP Trevor Rogers (7-7, 2.71). The pitchers aren’t related.