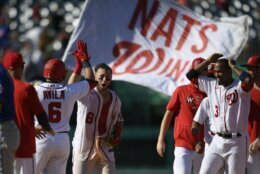 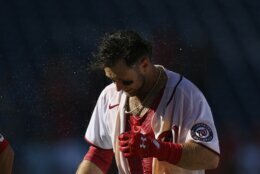 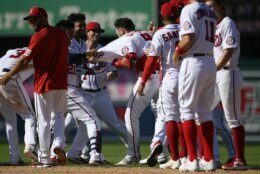 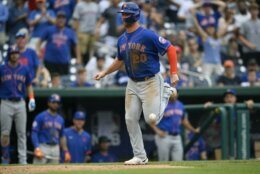 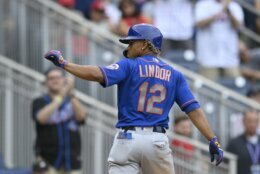 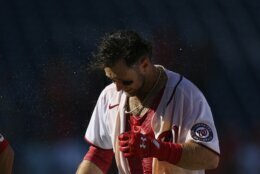 WASHINGTON (AP) — Carter Kieboom and Andrew Stevenson hit RBI singles in the ninth inning off Edwin Díaz and the Washington Nationals rallied once again, edging the New York Mets 4-3 Monday in the finale of a five-game series.

The Nationals, who had lost eight of their last nine, were 1 for 14 with runners in scoring position prior to the ninth.

Pete Alonso hit his 30th home run of the season for New York, which fell four games behind idle Atlanta in the NL East.

A series marked by rallies was decided by one final comeback.

Staked to a 3-2 lead, Díaz walked two of the first three hitters he faced before Stevenson singled to right. Kieboom then chopped a three-hopper up the middle against a drawn-in infield to score the winning run.

“As soon as I saw it get past the pitcher, I knew it was getting it through at that point,” said Kieboom, who delivered his first career game-ending hit.

Diaz wasted a two-run lead in the ninth inning in the series opener Friday night before the Mets recovered to win. New York squandered a nine-run lead in the opener of Saturday’s doubleheader before winning, and bounced back from blowing a four-run margin Sunday for another victory.

“Singles are going to happen and you are going to miss a spot, but the walks were the things we saw in both outings that hurt,” Mets manager Luis Rojas said of Díaz.

Alonso hit Nationals starter Patrick Corbin’s second pitch of the sixth inning into the Mets bullpen for a 3-2 lead. Nonetheless, Corbin’s outing represented progress for both himself and his team.

The left-hander allowed three runs on 11 hits in seven innings, the longest outing of any Nationals starter since Corbin went seven innings against Philadelphia on Aug. 3. It was the first time a Washington starting pitcher completed six innings since Aug. 25.

“Our bullpen has been beaten up and he gave us seven innings, which was awesome,” manager Dave Martinez said. “He pitched well. He used both sides of the plate like we asked him to.”

New York starter Trevor Williams scattered 10 hits and two runs over five innings, his longest outing since the Mets acquired him July 30 from the Chicago Cubs.

Alonso’s RBI single opened the scoring in the first, and the Mets got another run in the fourth on Jeff McNeil’s double-play grounder.

Washington scored a run in the first when Alcides Escobar tripled and came home on Juan Soto’s groundout. The Nationals opened the fourth with three consecutive hits, including Lane Thomas’ RBI single.

Mets: Rojas said RHP Jacob deGrom (forearm tightness) threw from just more than 100 feet. “We’ll see how he responds,” Rojas said. “It’s the first time he’s gone up to that. When he’s about the 120-150 range, then they start talking more about mound work. Let’s get to that first and then we’ll probably have a date or know if he’s going to be OK to let the ball go with the entire mechanics of his throw.” … New York activated OF Dominic Smith from the bereavement list and optioned C Chance Sisco to Triple-A Syracuse. … RHP Stephen Nogosek was activated from the injured list and optioned to Syracuse.

Nationals: C Keibert Ruiz was out of the lineup for the second consecutive game. Ruiz suffered a bone bruise when he took a foul ball off a knee Saturday.

Nationals: Washington begins a six-game road trip with RHP Paolo Espino (4-4, 4.08) facing Atlanta in the opener of a three-game series.