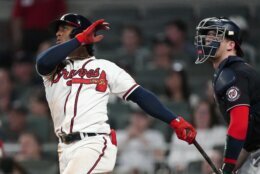 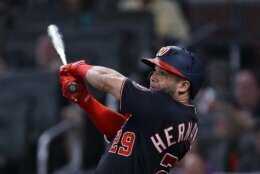 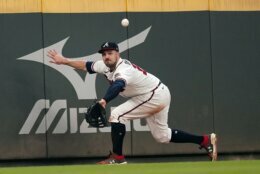 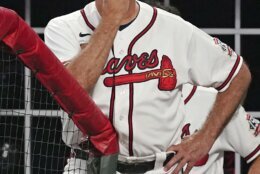 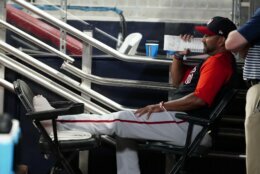 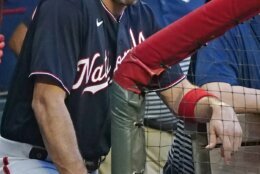 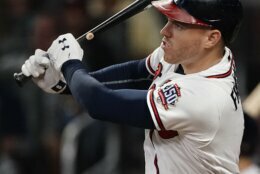 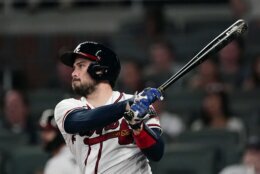 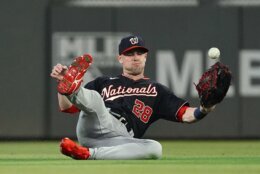 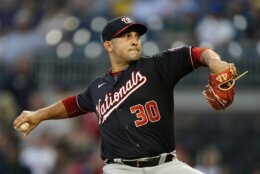 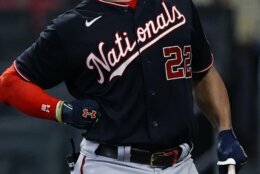 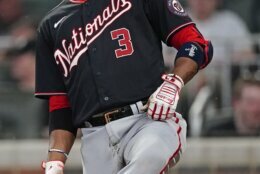 Albies, who had four RBIs and went deep for the fourth straight game, put the Braves up 5-1 in the fourth with a sacrifice fly before the Nationals scratched back to score four runs in the seventh against Tyler Matzek on Juan Soto’s RBI single and Yadiel Hernandez’s eighth homer, a three-run shot.

Albies’ 27th homer, which sailed into the seats in left-center, made it 7-5. Duvall, the NL RBIs leader with 97, gave the Braves a 3-1 lead in the first inning with his 32nd homer, which landed in the left field seats.

“I hit right on right before,” he said. “I was telling myself ‘If you get a pitch in the zone, try to drive it.’”

It’s been four games since Albies returned from fouling a ball off his kneecap last week in Los Angeles and had to be carried off the field. Now, he feels as good as ever.

“I mean I hit the ball off my kneecap,” he said. “You saw what happened. I just wanted to come back and do what I do.”

Atlanta, the three-time NL East defending champion, increased its division lead to 2½ games over Philadelphia, but the Braves entered having lost six of nine.

Will Smith recorded his 31st save in 35 chances after facing the minimum in the ninth.

Freddie Freeman doubled in the third and scored on Travis d’Arnaud’s double to make it 4-1. Duvall was tagged out at home on the play to end the inning.

Braves starter Max Fried pitched out of a jam in the second when he struck out Lane Thomas to strand a runner at third, and escaped trouble in the fourth when he stranded two runners on Thomas’ groundout. The lefty left a runner at third in the fifth when he picked off Carter Kieboom at first. The pickoff was Fried’s sixth, and his 20 pickoffs since he debuted in 2017 are most in the major leagues.

Fried gave up one run and six hits with four walks and five strikeouts in six innings. He has a 1.97 ERA in his last 10 starts, a span of 64 innings.

The Nationals led 1-0 in the first when Alcides Escobar doubled, advanced to third on a fielder’s choice and scored on Kieboom’s single to right-center.

“We’ve got to get a little bit more from our starting pitchers and keep us close,” Washington manager Dave Martinez said. “When we do that, we end up winning ballgames. You can’t spot a team five runs and come back and sustain that every day.”

Albies added an RBI single in the eighth to make it 8-5.

Nationals C Keibert Ruiz (left knee bone bruise) was to perform all baseball activities, catch a bullpen and take batting practice before the game. Manager Dave Martinez said Ruiz still has some swelling, He popped up as a pinch-hitter in the sixth. … SS Jordy Mercer, sidelined since July 21 with a left calf strain, took batting practice.

The Braves, who are second in the NL with 204 homers, have the first infield since the 2008 Florida Marlins to have each starter hit at least 25 long balls. 2B Albies (27) and 3B Austin Riley (29) homered Sunday at Colorado to keep pace with 1B Freeman (28) and SS Dansby Swanson (26). The Marlins had Mike Jacobs, Dan Uggla, Hanley Ramírez and Jorge Cantú reach the mark.

Freeman, last year’s NL MVP, leads the league for the second straight season in runs scored. He has 103 this year and is attempting to become the first first baseman to have consecutive seasons leading the league in that category since Albert Pujols in 2009-2010.

Before accepting a new $20 million, one-year contract the day before with Atlanta, RHP Charlie Morton said he had to decide if he wanted to return next year for a 15th season at age 38. The toughest part was knowing he will continue to miss being with his family of four in Bradenton, Fla.

“It was getting hard for me to look at next year and think I wasn’t going to play, and I love it here,” he said. “The group is awesome. It really did take me a little while to decide because it’s a big decision. It involves more than just me, but I’m extremely appreciative. The Braves have been nothing but great. I’m excited.”