J.T. Realmuto hit a go-ahead, two-run single to highlight a five-run rally in the ninth inning that carried the Philadelphia Phillies to a 7-5 victory against the Washington Nationals on Monday night.
Listen now to WTOP News WTOP.com | Alexa | Google Home | WTOP App | 103.5 FM
(1/3) 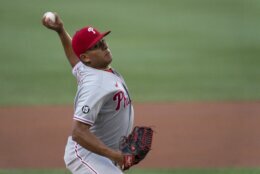 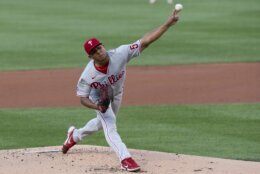 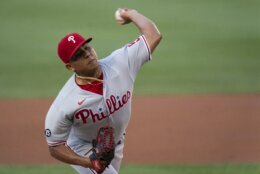 WASHINGTON (AP) — J.T. Realmuto hit a go-ahead, two-run single to highlight a five-run rally in the ninth inning that carried the Philadelphia Phillies to a 7-5 victory against the Washington Nationals on Monday night.

Trailing 3-2, the Phillies started the winning rally when Ronald Torreyes and Travis Jankowski opened the ninth with singles off Gabe Klobosits (0-1). Jean Segura doubled off Wander Suero to tie the game and Realmuto singled to put the Phillies ahead.

“A lot of good things in that inning,” Phillies manager Joe Girardi said.

Carter Kieboom hit a two-run homer in the bottom of the ninth before Ian Kennedy recorded his 17th save and first with the Phillies since being acquired from Texas.

The teams swapped leads in the seventh. The Phillies went ahead 2-1 on a wild pitch by reliever Andres Machado. Bryce Harper was thrown out at the plate by left fielder Yadiel Hernandez trying to score on Brad Miller’s fly out to end the inning.

The Nationals then went ahead 3-2 on Ryan Zimmerman’s pinch-hit, two-run single against Archie Bradley (6-1).

“We got what we wanted, the rollover ground ball,” Bradley said. “It just happened to be in a bad spot.”

Former closer Ranger Suárez started the bullpen game for the Phillies. Suárez did not allow a hit in his three scoreless innings before being replaced by one-time closer Hector Neris. Juan Soto’s two-out single in the fourth against Neris was the Nationals’ first hit. Neris pitched two scoreless innings.

Suárez expects to stay in the rotation and be stretched out to 60-65 pitches next outing.

Andrew Stevenson’s pinch-hit homer in the sixth off Enyel De Los Santos tied the game at 1. The Phillies called up De Los Santos on Monday after placing Vincent Velasquez on the 10-day injured list with a blister.

Rookie Josiah Gray made went five innings his Nationals debut after being obtained from Los Angeles in the blockbuster deal that sent Max Scherzer and Trea Turner to the Dodgers. The 23-year-old right-hander allowed four hits, including a solo home run to Odúbel Herrera, walked two and struck out two in his third big league outing.

Mason Thompson, also acquired at the trade deadline, relieved Gray. Thompson came over from San Diego along with infielder Jordy Barley in exchange for veteran reliever Daniel Hudson. He allowed two hits in a scoreless inning.

The multiple debuts and widespread roster turnover in Washington spurred brief chants of, “Let’s go new guy!” throughout the game.

Nationals: SS Alcides Escobar (left wrist) remains day-to-day after being struck by a pitch on Friday. He is still unable to swing.

Phillies: OF Andrew McCutchen (left knee inflammation) was placed on the 10-day injured list. C Andrew Knapp was reinstated from the paternity list.