J.T. Realmuto and Rhys Hoskins each hit a two-run double in the ninth inning, and the Philadelphia Phillies rallied for a 7-6 victory over the Washington Nationals on Thursday to complete a four-game sweep.
Listen now to WTOP News WTOP.com | Alexa | Google Home | WTOP App | 103.5 FM
(1/6) 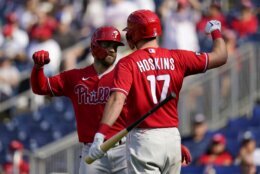 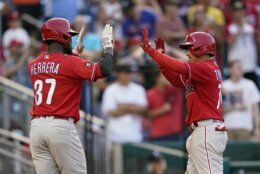 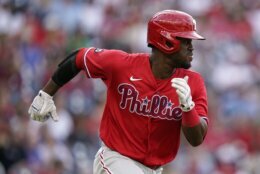 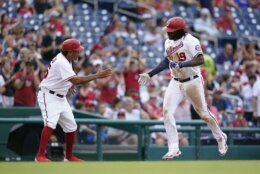 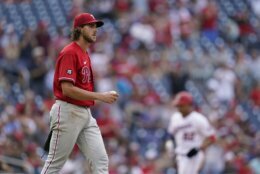 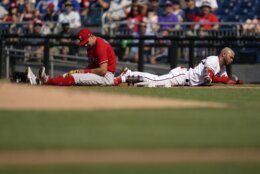 WASHINGTON (AP) — J.T. Realmuto and Rhys Hoskins each hit a two-run double in the ninth inning, and the Philadelphia Phillies rallied for a 7-6 victory over the Washington Nationals on Thursday to complete a four-game sweep.

The Phillies have won five straight overall and moved within one-half game of the NL East-leading New York Mets, who travel to Philadelphia for a three-game series beginning Friday. Philadelphia is three games over .500 for the first time since May 14.

“Can’t wait,” Bryce Harper said about facing the Mets. “I hope that place is rockin’ all the way to the top.”

“You’ve got to come up with some big hits and have a couple magical moments,” Hoskins said. “I don’t think we’re done with those.”

Juan Soto scored in the ninth on a single and throwing error, but Archie Bradley recovered for his second save. Mauricio Llovera (1-0) worked a scoreless ninth for the Phillies.

“We get down early and they don’t panic,” manager Joe Girardi said. “This game’s a grind. It’s tough. You’re going to have your good moments and your bad moments. but each time you walk to the plate or step on that rubber, you have a chance to do something great.”

Josh Bell hit a three-run homer in the fifth off Aaron Nola to put the Nationals ahead 5-2. Nola allowed five runs on five hits, walked three and struck out seven in five innings.

The Phillies led 2-0 before the Nationals tied it in the fourth. Nola allowed Carter Kieboom’s RBI single and hit Tres Barrera with a pitch with the bases loaded.

Soto singled, doubled and walked twice, and Kieboom doubled, singled and walked. Washington has lost four straight and fell a season-worst 11 games under .500.

Soto made a leaping catch in right field to take a home run away from Didi Gregorius in the seventh after the Phillies got closer on Odúbel Herrera’s RBI single.

Harper homered in the second against his former team, which he has tormented this season.

“This is obviously a big series with the Mets,” Realmuto said. “It’s going to be huge. It’s not everything to us because there’s a lot of season left, but it can be a big momentum builder for the rest of the year.”

COACHES ON THE MEND

On Sunday, all the members of the coaching staff who tested positive for COVID-19 will be cleared to rejoin the team. They will join the Nationals on their day off Monday in New York before a three-game series with the Mets begins.

Nationals: RHP Kyle McGowin (right biceps fatigue) threw 24 pitches in a live batting practice session on Thursday. McGowin is close to going on a minor-league rehab assignment. He last appeared in a game on July 10.

Phillies: 2B Jean Segura had the day off to rest a sore knee.