Austin Riley homered in the seventh inning of a weather-delayed game, and the Atlanta Braves beat the Washington Nationals 4-2 early Saturday morning to move into a first-place tie in the NL East with Philadelphia.
Listen now to WTOP News WTOP.com | Alexa | Google Home | WTOP App | 103.5 FM
(1/4) 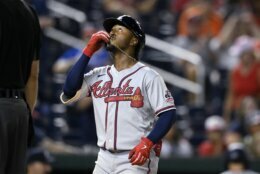 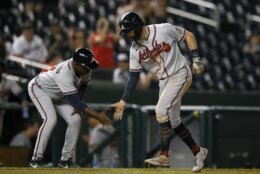 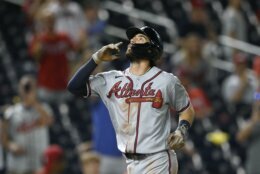 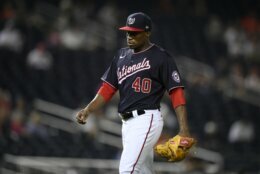 WASHINGTON (AP) — Austin Riley homered in the seventh inning of a weather-delayed game, and the Atlanta Braves beat the Washington Nationals 4-2 early Saturday morning to move into a first-place tie in the NL East with Philadelphia.

The announced attendance of 24,812 had noticeably diminished by the time the final out was recorded at 1:19 a.m.

The start of the game was delayed 3 hours, 12 minutes due to severe weather.

Atlanta entered Friday in third place in the NL East, a game behind Philadelphia and a half-game back of the New York Mets. Both the Phillies and Mets lost on Friday.

Washington dropped its fifth straight game. It carried a 2-0 lead into the fifth before Atlanta rally with the long ball.

Travis d’Arnaud got the Braves on the board with his third homer, a solo shot just over the wall in left in the fifth. Ozzie Albies tied it at 2 with his 21st homer in the sixth, giving him four homers and seven RBIs in his last five games.

Riley’s 24th homer of the season put Atlanta ahead to stay in the seventh, and Dansby Swanson hit his 21st homer in the ninth.

“It’s pretty when he hits balls like that,” said Braves manager Brian Snitker when asked about Riley’s shot that gave Atlanta the lead for good.

The Nationals came out fast after the long delay, opening with three consecutive hits off Charlie Morton (11-4), including Juan Soto’s RBI single. Josh Bell added a sacrifice fly, making it 2-0 in the first.

“They kind of jumped us in the first inning before the dust settled,” Snitker said about the Nationals productive first. “That can happen to anybody. You see those first innings like that but (Morton) settled. That was really good.”

Morton struck out seven in six innings. Will Smith earned his 24th save despite allowing the first two batters to reach in the ninth.

Nationals starter Josiah Gray (0-1) permitted three runs and five hits in six-plus innings. He struck out six and walked none.

Gray was acquired at the trade deadline when Max Scherzer and Trea Turner were shipped off to the Los Angeles Dodgers. He has allowed five runs in his three starts with Washington — all coming on solo homers.

“Every time he goes out there he’s giving us an opportunity to win the game and that’s awesome,” Nationals manager Dave Martinez said about his new pitcher.

“It’s rewarding,” Swanson said about getting the win in the first game of nine-game road trip that was delayed by over three hours.

“This has been a challenging year. We have a big seven week stretch ahead of us. Even a rain delay playing into the wee hours of the morning. Good way to start the roadtrip.”

Swanson’s 21st homer in the ninth broke the franchise single-season record for shortstops. Denis Menke previously held the record with 20 set in 1964 with the Milwaukee Braves.

Screech — the Nationals oversized bald eagle mascot — was visible in the crowd during play as was also seen dancing on top of Washington’s dugout in between innings while wearing pajamas and a nightcap as the game extended well into the night.

Ryan Zimmerman was honored before the game after becoming the franchise’s all-time leader in games played when he appeared in his 1,768th game on Thursday.

Martinez and general manager Mike Rizzo presented the 36-year-old first baseman with his jersey from Thursday along with a scorecard. Zimmerman made his debut in 2005. Zimmerman entered a pinch hitter in the ninth.

Braves: Righty reliever Richard Rodriquez was shaken up in the seventh after being hit by a Victor Robles groundout. He had to be evaluated by Atlanta’s trainer before finishing the inning.

Nationals: LHP Patrick Corbin (6-11, 5.83 ERA) is struggling with career-high ERA and has lost six of his last seven decisions.