Pinch-hitter Brandon Drury delivered a tiebreaking single in the eighth inning and the New York Mets rallied from a pair of three-run deficits to defeat the Washington Nationals 8-7 on Wednesday in the resumption of a game suspended by rain the night before.
Listen now to WTOP News WTOP.com | Alexa | Google Home | WTOP App | 103.5 FM
(1/12) 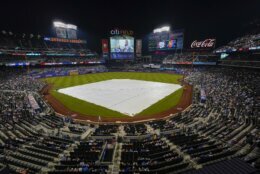 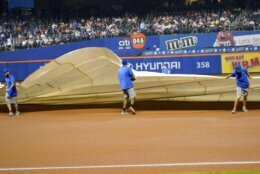 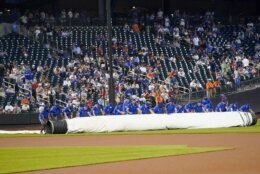 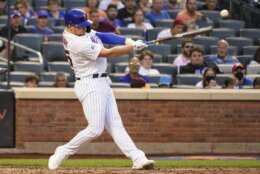 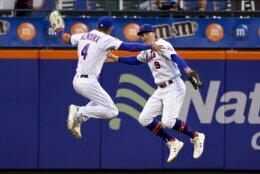 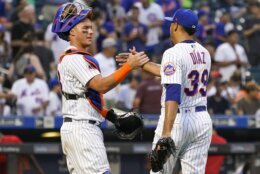 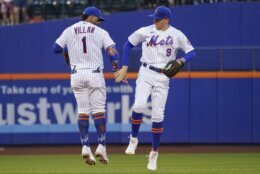 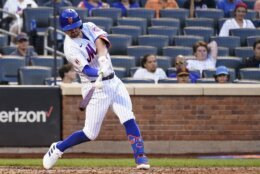 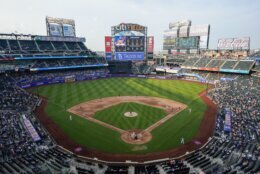 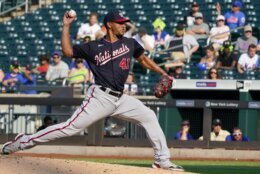 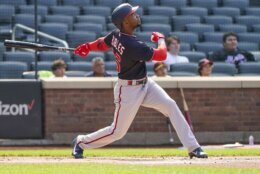 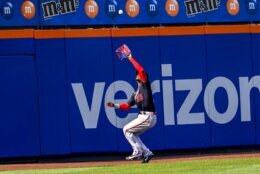 NEW YORK (AP) — Between another round of rainouts, Pete Alonso and the New York Mets actually managed to get a game in Wednesday and pull one out.

Pinch-hitter Brandon Drury delivered a tiebreaking single in the eighth inning and the Mets rallied from a pair of three-run deficits to defeat the Washington Nationals 8-7, completing a game suspended by showers a night earlier.

The teams were then supposed to play their regularly scheduled game Wednesday night, but it was postponed with a storm approaching and rescheduled as part of a single-admission doubleheader Thursday beginning at 12:10 p.m.

Under pandemic rules, both games will be scheduled for seven innings.

“If we didn’t have bad weather all season we would have no weather. Unreal,” Mets owner Steve Cohen tweeted.

Alonso broke out of an 0-for-21 slump with three hits, including an RBI double off the center-field fence that brought the Mets to 7-6 in the seventh. New York tied it on a throwing error by 6-foot-7 rookie reliever Mason Thompson (0-1) in the eighth and snapped a season-worst four-game slide, winning for only the third time in 12 games to avoid falling to .500.

The Mets have mustered only 20 runs in their past nine defeats.

“I liked the conviction behind the swings that we took out there,” manager Luis Rojas said. “It started last night. … It’s just great to see.”

Juan Soto hit a three-run homer Tuesday night and finished 3 for 4 with a walk in his return to the starting lineup from a sore right knee. Washington went up 7-4 in the fifth with the help of a two-run double by Luis Garcia, but its inexperienced bullpen couldn’t hold it.

“It’s going to be some bumps and bruises on the way, but I still like the way they’re throwing the ball,” manager Dave Martinez said.

J.D. Davis led off the eighth with a double and scored when Thompson threw away Jonathan Villar’s sacrifice bunt.

One out later, Drury fisted a soft single over a drawn-in infield — the ball landed at the back of the infield dirt behind second base.

“It was a great comeback,” Mets pitcher Rich Hill said.

Trevor May (5-2) worked a perfect inning and Edwin Díaz got three quick outs for his 24th save in 28 tries, striking out Soto to start the ninth.

Washington, which tore down its team in a huge selloff at the trade deadline, has dropped seven of eight.

The second game was originally penciled in for 8 p.m. There was a ceremonial first pitch and the national anthem was even performed before the start was pushed back and the tarp placed on the field.

Fans were later instructed to take cover on the concourse for safety, and a foreboding radar map was displayed on the large center-field scoreboard as lightning flashed in the sky.

Just before 9 p.m., the nightcap was postponed. Mets pitcher Marcus Stroman, who had been scheduled to start Game 2, played catch with a teammate in the outfield.

The game that WAS completed resumed in a mostly empty ballpark with the Nationals leading 3-1 in the top of the second.

New York is poised to play its 12th doubleheader of the year Thursday, with two more scheduled. The last team to play 14 doubleheaders in one season was the 1979 Milwaukee Brewers, according to the Elias Sports Bureau.

Martinez said he had a good conversation with Soto about the teardown.

“These are guys that he came up with, guys that are respected very much, that got traded. And at first, he didn’t understand it, and we spoke a lot about, just continue to do what he does and that’s to play baseball and have fun. I didn’t want him to think that he’s got to put this team on his shoulders,” Martinez said. “So, he’s been good. It took him a few days to adjust, just because everything’s new and he’s never been through this before.”

Drury leads the majors with a .476 batting average (10 for 21) as a pinch-hitter this year. He has three homers, three doubles and nine RBIs in that role.

Nationals: Soto was listed in the Game 2 lineup. The slugger was limited to two pinch-hitting appearances last weekend against Atlanta. … RHP Stephen Strasburg, recovering from season-ending neck surgery, was transferred to the 60-day injured list.

Mets: SS Francisco Lindor (right oblique strain) simulated game situations at shortstop and took batting practice on the field for the first time since getting injured July 16. He’ll have a light day Thursday, but there’s no next step in place yet. “He looked good,” Rojas said. … Javier Báez (lower back) pinch-hit in the sixth and struck out on three pitches to end the inning. Báez, initially announced as Drury over the public address system, was out of the posted starting lineup in the second game as well. … The team is eyeing Noah Syndergaard as a potential reliever if he can return from Tommy John surgery in September.

Hill took the mound when play resumed. Technically, it was his first major league relief appearance since 2014 with the Yankees. After he was moved up a day, the Mets need a starter for Thursday, and right-hander Trevor Williams is an option to make his New York debut. Williams, acquired with Báez from the Cubs at the July 30 trade deadline, has been pitching at Triple-A Syracuse.

Nationals: Had planned a bullpen game in the nightcap, with RHP Andres Machado listed as the opener. RHP Erick Fedde (4-8, 5.15 ERA) was already scheduled for Thursday and will pitch one of the games.