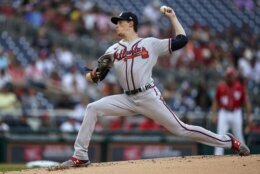 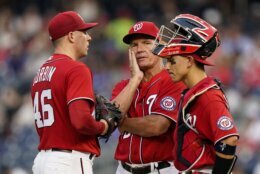 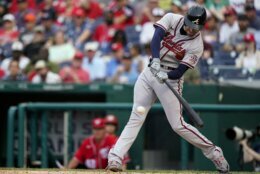 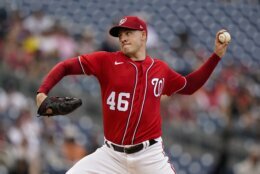 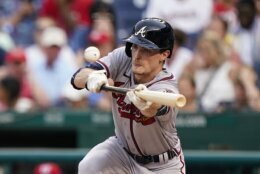 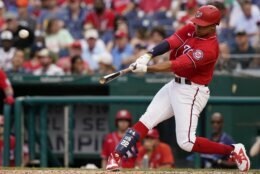 Albies’ 22nd homer of the season – a two-run shot off struggling starter Patrick Corbin (6-12) in the fifth inning – landed in the Washington bullpen in left-center field. Atlanta has won nine of 11 and kept pace at the top of the NL East standings with the Philadelphia Phillies, who beat the Cincinnati Reds 6-1 earlier in the day.

“It’s a huge difference from where we were three weeks ago,” said Braves manager Brian Snitker, who has seen his club go from five games back to grab a share of first in that period.

“The lineup depth. … The guys are swinging the bat well. It’s pretty good.”

Albies finished with three hits and has five homers in the last six games. He hit his sixth triple of the season in the third.

“He’s an explosive guy,” Snitker said. “I didn’t even realize until that last inning he was a double away from the cycle.”

Max Fried (10-7), who has received a decision in each of his last 15 starts, allowed one earned run on five hits through six innings. He struck out seven with no walks and even got the first hit of the game for the Braves.

Swanson hit his 22nd homer in the seventh – a three-run drive over the Nationals’ bullpen – and his 23rd in the ninth, a solo shot to left field. He also had a two-out, two-run single in the fifth. Swanson has homered in back-to-back games, and it was the sixth multi-homer game of his career.

Corbin lasted 4 2/3 innings and gave up six runs on seven hits while striking out five with two walks. The two-time All-Star has lost his last five decisions and has a major league-worst 6.04 ERA.

Adam Duvall added a solo homer in the ninth, his 26th of the season.

Swanson and Albies combined to go 6 for 10 with three home runs and nine RBIs. They each homered for the second consecutive game.

“It’s a lot of fun, especially now that we are winning,” Albies said about their recent offensive exploits.

The two are closing in on becoming the fifth pair of infield teammates to each hit 25 homers in the same season.

“It’s awesome,” Fried said when asked about his improved hitting.

“I really enjoy hitting and obviously I know it can really help out our club. Anything that I’m doing to help the team win … I’m definitely giving everything I’ve got to do that.”

Braves: Snitker said OF Eddie Rosario (oblique strain) is feeling good and that getting at-bats is the biggest thing while the veteran is at Triple-A Gwinnett. Rosario was acquired in a deadline trade and has yet to make his Atlanta debut. The 29-year-old has been on the IL since July 6.