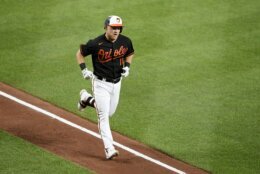 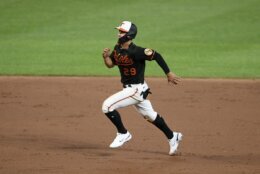 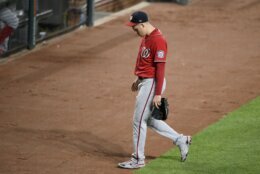 Valaika homered twice — doubling his total for the season — and the Orioles beat the Washington Nationals 6-1 on Friday night for just their second victory in their last 11 home games. Valaika had one home run all season before hitting one Wednesday at Tampa Bay. After an off day Thursday, he led the Orioles past the Nationals.

“I think tonight I just squared those balls up better than I have pretty much this whole year,” he said. “It felt good to actually drive a ball and not see it die at the track.”

Josh Bell went deep for Washington in the fourth inning, but that 1-0 lead for the Nationals didn’t last long. Baltimore scored twice in the fourth before Valaika’s solo shot in the fifth.

Valaika hit another solo homer in the seventh to make it 6-1.

Jorge López allowed a run and four hits in 4 2/3 innings. He was pulled one out short of the win — at that point, Baltimore led 2-1 and Juan Soto was coming up with the tying run on third. Paul Fry (4-3) retired Soto on a grounder, then struck out the side in the sixth.

Austin Hays doubled in a run in the fourth to tie the game at 1, and he later scored on a single by Ramón Urías. In the sixth, Urías came up with a man on third and hit a groundball, and shortstop Trea Turner’s throw home was high. The play was scored as a fielder’s choice, and that run made it 4-1.

Urías then went to third when Bell let a pickoff throw get past him at first base for an error. Pedro Severino scored Urías with a sacrifice fly.

This was the 15th time López has thrown at least 4 1/3 innings this year, but he’s completed five innings only seven times. On this night, there was a clear matchup-based reason he was pulled. The Orioles brought in a left-hander to face Soto.

“I saw Juan Soto come up to the plate and I had Paul Fry ready for him,” Baltimore manager Brandon Hyde said. “And Paul Fry did a great job. Paul Fry and Tanner Scott both faced the middle of their order and pitched extremely well.”

The Nationals’ starters had gone three straight games without allowing an earned run, but that ended Friday. Corbin retired his first nine hitters but didn’t have any scoreless frames after that.

“I thought my stuff played well tonight,” he said. “It’s just frustrating — you look up, you get five runs.”

Nationals: RHP Stephen Strasburg has had some neck discomfort recently. “We backed him down again,” Martinez said before the game. “I know they’re going to look at some different options, probably see if we can find another specialist for him to go see.” Strasburg hasn’t pitched since June 1.

Orioles: Baltimore announced after the game that RHP Tyler Wells (right wrist tendinitis) was put on the 10-day injured list retroactive to Tuesday. … 3B Maikel Franco (sprained right ankle) was reinstated from the injured list and was in the starting lineup. He went 0 for 3. … Hyde said he’s hoping LHP Keegan Akin and OF Anthony Santander, who are on the COVID-19 injured list, can be back by the middle of next week.

Max Scherzer (7-4) takes the mound for the Nationals against Baltimore’s Matt Harvey (4-10) on Saturday night. Harvey threw six scoreless innings in his last start to snap a 12-game winless streak.