Max Scherzer delivered a signature performance in what might be his last start for the Nationals, allowing three hits in six innings as Washington beat the Philadelphia Phillies 3-1 in the opener of a doubleheader on Thursday.
Listen now to WTOP News WTOP.com | Alexa | Google Home | WTOP App | 103.5 FM
(1/11) 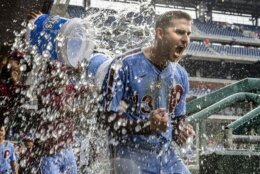 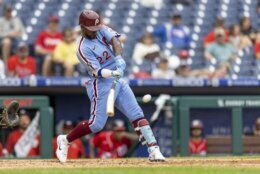 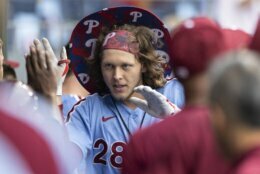 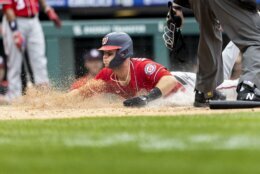 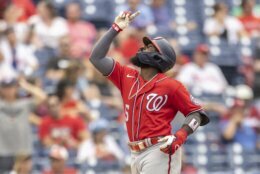 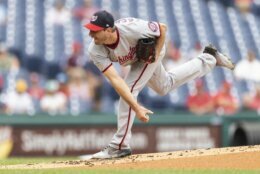 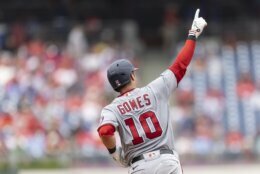 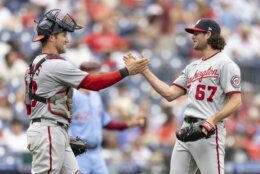 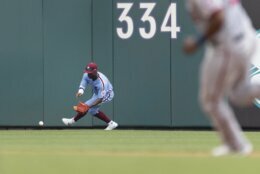 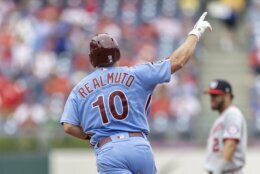 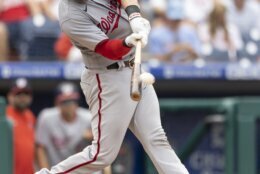 PHILADELPHIA (AP) — Max Scherzer delivered a signature performance in what might be his last start for the Nationals, allowing three hits in six innings in the opener of a doubleheader that Washington ultimately split with the Philadelphia Phillies on Thursday.

The Phillies moved back within 3 1/2 games of the first-place New York Mets in the NL East.

Scherzer sat in the top row of the visiting dugout for most of Game 2 with his feet up and talking to Yan Gomes, whose two-run seventh-inning homer in Game 1 off Philadelphia ace Zack Wheeler gave Scherzer (8-4) his 92nd — and likely final — win as a National in seven seasons.

“Today was a wacky start because of everything going on, but you put the blinders on and go and compete,” Scherzer said. “Even when you are at your worst, you want to go out and do your best.”

Before the first game began, the sputtering Nationals — who are 7-17 in July and are dealing with a COVID-19 outbreak that forced Wednesday’s game to be postponed — traded closer Brad Hand to the Toronto Blue Jays.

Scherzer allowed a fourth-inning homer to J.T. Realmuto while striking out five and walking three on 88 pitches. Kyle Finnegan stepped into the closer’s role and struck out two in the seventh for his first career save.

As Scherzer received handshakes in the Washington dugout, Gerardo Parra doubled and Gomes — who was reinstated from the 10-day injured list before the game — drilled a sinker from Wheeler (8-6) to center field for his ninth homer of the season.

Wheeler went the distance in the seven-inning game, allowing seven hits, walking two and striking out five on 100 pitches.

“We need to win some games,” Wheeler said. “That was a big game for us and I needed to go out and post some zeros, especially against Max because he’s going to hold us or try to and I let us down out there.”

Scherzer — a three-time Cy Young Award winner and a stalwart of Washington’s 2019 World Series-winning squad — will become a free agent at the end of the season.

“I don’t want to look at this as a negative thing. I really look at it as a positive thing,” Scherzer said. “I signed a seven-year deal here to win a World Series. And we won. We won a World Series. That’s a lifelong dream come true.”

The Nationals have fallen out of playoff contention, making Scherzer by far the best starting pitcher on the market before Friday’s trade deadline.

Scherzer was asked about his expectations for the next 24 hours.

“I’ve got nothing,” he said. “I don’t know. How does this go? This is new to me. I’ve only been traded during the offseason. I’ve never had to deal with this during the season. For me, you put the blinders on, go out, compete and have fun with your teammates.”

Scherzer had made only one start since starting the All-Star Game and was scratched from his last outing with tightness in his right triceps. While players in trade talks are often rested to avoid injury, Scherzer took the ball anyway.

In Game 2, Josh Harrison homered and Yadiel Hernandez had two hits and two RBIs as Washington jumped on the Phillies, who were trying to piece together a bullpen game, to lead 7-0 in the third.

Rhys Hoskins, Andrew McCutchen and Alec Bohm all homered off Nationals starter Patrick Corbin as the Phillies began their rally. Philadelphia scored three runs in the bottom of the seventh — including a two-out RBI single to left by Realmuto that tied the game.

Ranger Suarez (5-3) allowed Ryan Zimmerman’s RBI single in the eighth that made it 8-7. Phillies pitcher Aaron Nola was forced to enter as a pinch-hitter in the bottom half and drew a walk off Clay to load the bases. Miller followed with a towering shot that smacked off an advertising sign in the upper deck for his 10th homer of the season and second career grand slam.

“Baseball kicks you all the time,” Miller said. “It was a long day at the park, but we needed that. Just looking over to the bench and seeing the guys going crazy — that’s what I loved.”

Before the doubleheader, Washington placed All-Star SS Trea Turner, RHP Daniel Hudson, C Alex Avila and RHP Austin Voth on the COVID-19 injured list. Turner was the first player to test positive and was pulled from Tuesday night’s game during the first inning.

Martinez said none of the cases was “too serious” and that only person who tested positive was unvaccinated.

“Thank God that most of us or all of us are vaccinated,” Martinez said. “I can’t imagine going through this without being vaccinated. I want to make it clear, (the vaccine) does help.”

Nationals: RHP Stephen Strasburg had surgery on Wednesday to address neurogenic thoracic outlet syndrome. The 2019 World Series MVP will miss the rest of the season but is expected to be healthy for the start of spring training next year.

Phillies: OF Bryce Harper and 1B Hoskins left Game 2 after appearing to be injured on the same Andrew Stevenson single in the third inning. Hoskins dove as the ball went past him. He stayed in the game and homered in his next at-bat, but left in the fifth with what manager Joe Girardi called a groin injury. Harper reached down for the ball, bobbled it and came up limping with what he said was back soreness. He was replaced Miller in the third.