Trea Turner singled in the first inning and scored on Josh Bell's three-run homer that put the Washington Nationals ahead to stay, but their shortstop was then pulled from the game because of a positive COVID-19 test and never played defense in a 6-4 win over the Philadelphia Phillies on Tuesday night.
Listen now to WTOP News WTOP.com | Alexa | Google Home | WTOP App | 103.5 FM
(1/5) 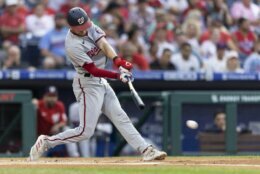 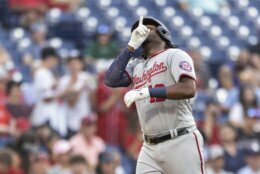 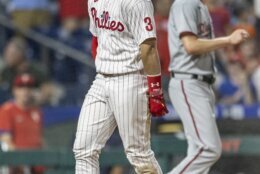 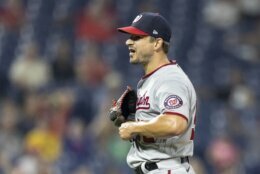 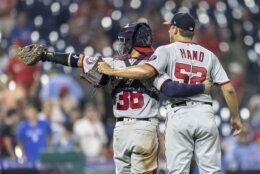 PHILADELPHIA (AP) — Trea Turner singled in the first inning and scored on Josh Bell’s three-run homer that put the Washington Nationals ahead to stay, but their shortstop was then pulled from the game because of a positive COVID-19 test and never played defense in a 6-4 win over the Philadelphia Phillies on Tuesday night.

Juan Soto hit another three-run homer for the Nationals in the second.

After Turner got his one-out hit, he moved to third on a single by Soto before Bell hit his 16th homer. Turner then went back to the dugout, and directly down the tunnel toward the clubhouse, never taking the field in the bottom of the inning.

“I found out right after he scored,” manager Dave Martinez said. “I had to pull him right out of the game. He’s got to get isolated right away. Now, he’ll get tested and from there we’ll see what happens.”

Josh Harrison doubled and had two hits for the Nationals, who snapped a five-game losing streak but still have won only twice in their past 15 games.

While Turner will miss time because of MLB’s COVID-19 protocols, the Nationals will be without right-hander Stephen Strasburg the rest of the season. Martinez said before the game that the pitcher would have season-ending neck surgery on Wednesday.

“With all the things we’ve gone through, I’m proud of these guys,” Martinez said. “They don’t quit.”

Bryce Harper hit his first career inside-the-park homer, doubled and drove in a pair of runs for Philadelphia. Andrew McCutchen also went deep for the Phillies.

“Tough night for us,” Harper said, “but I thought we battled the best we could throughout the game and never gave up.”

Harper got his 16th homer in the fifth, when he drove a 1-1 changeup from Erick Fedde deep to left-center. Victor Robles leaped for it, but it was out of his reach and bounded hard off the wall toward center. Soto came over from right field to retrieve the ball, but his throw had no chance of getting Harper, whose slide into home wasn’t even needed.

Harper said he probably hit an inside-the-park homer as a Little Leaguer, but he couldn’t recall an exact time.

“Hitting one right there was pretty cool,” he said. “I was pretty happy and fired up in that situation.”

McCutchen, who hit a game-ending three-run homer in the series opener Monday, followed with a solo shot.

Fedde was done a batter later after giving up a single to Rhys Hoskins, and allowed four runs on eight hits with four strikeouts and a walk in 4 2/3 innings. Wander Suero (2-2), the second of four relievers who combined for 4 1/3 scoreless innings, retired all five batters he faced.

Brad Hand, who had blown two straight saves, finished it off for his 21st save.

The three-time All-Star felt discomfort after a 27-pitch bullpen session last week and saw a specialist Monday. Strasburg (1-2, 4.57 ERA in five starts this season) was diagnosed with neurogenic thoracic outlet syndrome. Martinez said the surgery will be done Wednesday by Dr. Greg Pearl in Dallas on Wednesday. The 2019 World Series MVP is expected to be ready for the start of spring training next year.

Nationals: Robles was removed from the game during his at-bat in the ninth inning. Robles grabbed at his lower back after fouling off a pitch, and Martinez confirmed afterward that he had tightness in his lower back on his right side.

Phillies: Seranthony Dominguez threw a simulated game. The right-handed reliever had Tommy John surgery last July and hasn’t pitched since 2019. He hopes to begin a rehab assignment next week and return to Philadelphia in late August or early September. … RHP J.D. Hammer was reinstated from the COVID-19 IL.