Andrew McCutchen hit a three-run homer in the bottom of the ninth inning to give the Philadelphia Phillies a 6-5 victory over the sinking Washington Nationals on Monday night.
Listen now to WTOP News WTOP.com | Alexa | Google Home | WTOP App | 103.5 FM
(1/12) 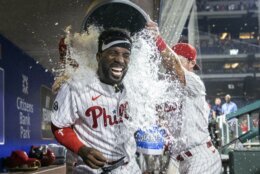 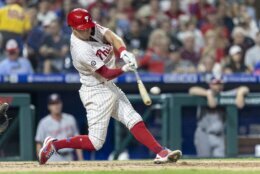 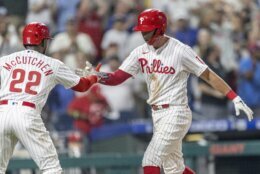 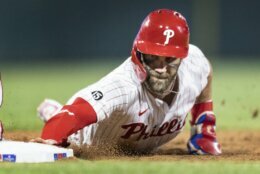 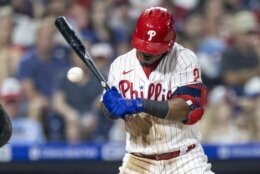 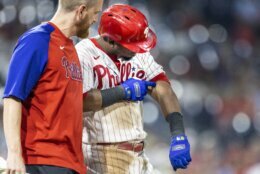 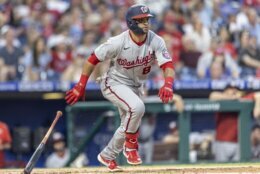 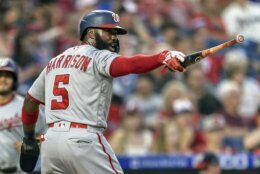 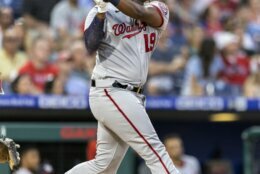 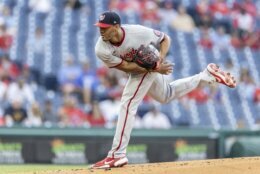 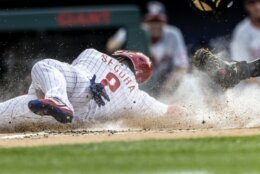 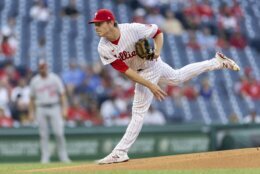 PHILADELPHIA (AP) — Andrew McCutchen hit a three-run homer in the bottom of the ninth inning to give the Philadelphia Phillies a 6-5 victory over the sinking Washington Nationals on Monday night.

Rhys Hoskins also had a three-run homer for the second-place Phillies, who are 3 1/2 games behind the New York Mets in the NL East.

“That’s a big moment for us,” manager Joe Girardi said.

Jean Segura led off the ninth against Brad Hand (5-5) with a double. After J.T. Realmuto struck out, Bryce Harper walked. McCutchen drove the next pitch, a 92 mph sinker, to the opposite field and over the wall in right.

“Being able to come through was definitely gratifying for me,” McCutchen said. “We’re a resilient club here. We know what we’re capable of doing.”

It was the second straight blown save for Hand.

“The pitch he threw to McCutchen was up and out over the plate; that’s where Andrew likes the ball,” Washington manager Dave Martinez said. “We’ve got to get him down in the zone again.”

Archie Bradley (5-1) allowed a run in the top of the ninth but got the win.

Josh Bell tripled and drove in two runs for the Nationals, who have lost five straight and 11 of 14.

Joe Ross pitched five scoreless innings, allowing three hits with four strikeouts and two walks, in his return to the Washington rotation after being sidelined since July 4 due to right elbow inflammation.

Spencer Howard breezed through three scoreless innings of one-hit ball before running into trouble in the fourth. Bell atoned for his first-inning blunder, when his lackadaisical play loping to the bag at first base allowed Realmuto to reach on an infield single, by tripling home the first run.

Josh Harrison followed with a run-scoring triple of his own, and Gerardo Parra’s RBI single made it 3-0 and ended Howard’s night. Another RBI single by Victor Robles gave the Nationals a four-run lead and completed the line for the 24-year-old rookie Howard, who gave up four runs on six hits with two strikeouts and no walks in 3 2/3 innings.

Howard left with a blister on his right middle finger.

The Phillies pulled to 4-3 in the sixth against lefty reliever Austin Voth. Harper led off with a single, McCutchen doubled and Hoskins hit a drive to left on a 1-2 changeup for his 22nd home run.

Philadelphia had a good opportunity to score in the eighth, with runners on first and second with two outs, but Daniel Hudson struck out pinch-hitter Alec Bohm to keep the Nationals up a run.

Washington tacked on a run in the ninth on Bell’s grounder.

“We never felt like we were out of it,” McCutchen said.

Both Howard and Girardi downplayed the blister, with Girardi explaining it was a callous that peeled off. They believe the right-hander will make his next scheduled start.

Martinez expects his club to bounce back from this defeat.

“You have 30 to 45 minutes to think about the game and let it go,” he said. “Put that one behind you. There’s nothing we can do about it now. Focus on getting a good night’s sleep and go 1-0 tomorrow.”

Nationals: Martinez did not have an update on RHP Stephen Strasburg (neck), who visited a specialist Monday. Strasburg hasn’t pitched since June 1 and had discomfort in his neck on July 21 after a 27-pitch bullpen.

Phillies: RHP Zach Eflin will miss another start due to right knee tendinitis. Eflin, who last pitched on July 16, was not deemed ready after throwing a bullpen on Sunday. … Right-handed reliever Seranthony Dominguez, who missed last season following Tommy John surgery, is targeting a rehab assignment next week and could return to the majors in late August or September if all goes well.