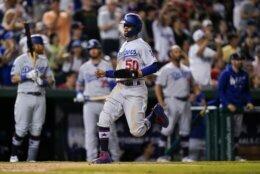 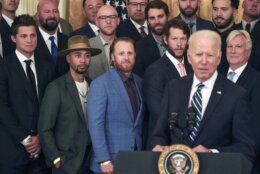 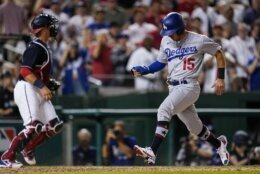 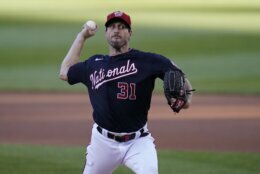 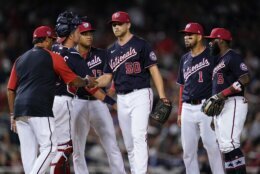 WASHINGTON (AP) — Mookie Betts hit a go-ahead single during a nine-run rally in the seventh inning after Washington ace Max Scherzer departed, and the Los Angeles Dodgers surged past the Nationals 10-5 Friday night for their seventh straight win.

The Dodgers went to the White House in the morning to meet with President Joe Biden and celebrate their 2020 World Series title.

Hours after the visit, Dodgers pitcher Trevor Bauer was put on seven-day administrative leave by Major League Baseball. Earlier this week, an allegation of assault was made by a woman against the reigning Cy Young Award winner.

Police and MLB are investigating the allegation. Bauer’s agents have disputed her account. Bauer was not with the Dodgers at the White House.

The Nationals lost slugger Kyle Schwarber in the second inning when he grabbed at his hamstring after a single. He hit a franchise-record 16 home runs in June. Schwarber will have an MRI exam on Saturday.

Scherzer also allowed just one earned run in six innings and struck out eight, but the Dodgers made him work to do so. He threw 100 pitches and was forced to yield to a banged-up Nationals bullpen to start the seventh with the Nationals leading 3-1.

“To grind him, get him out after six innings I thought was a win in itself.” Roberts said.

Left-handed reliever Sam Clay (0-1) found trouble when he replaced Scherzer. Chris Taylor hit a leadoff double, a dribbler by pinch-hitter Albert Pujols scored him, and Austin Barnes was hit by a pitch.

The Nationals summoned Austin Voth to replace Clay and he allowed four earned runs without retiring a batter.

The Nationals slid back to .500 after a second consecutive loss to the Dodgers.

“We’ve been kind of down and out in the past,” Martinez said. “We survived. We’ll do it again.”