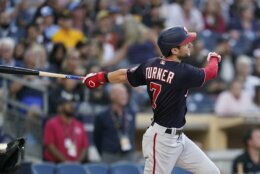 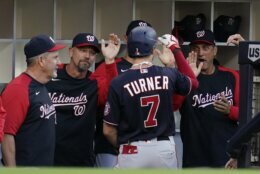 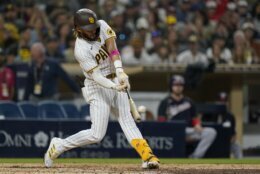 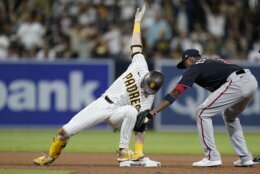 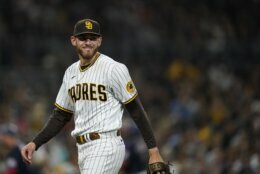 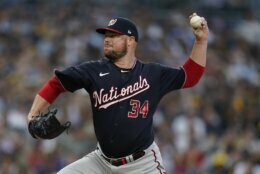 SAN DIEGO (AP) — In his first swing since being named an All-Star, Trea Turner drove a pitch from Joe Musgrove into the second deck in left field at Petco Park.

The Nationals raved about how important it is to have Turner in their lineup. He hadn’t played since getting hurt on Wednesday.

“That was awesome,” manager Dave Martinez said. “I mean, we talked to him before the game, we watched him swing, he said he felt pretty good so he came through for us tonight. He wants to play. He wants to be out there every day. He doesn’t ask me for days off, he goes out there and plays the game the right way. Now you can see why he’s an All-Star.”

Turner said his finger is still a little sore “but overall I feel confident.”

He said he tried to rest his finger as much as possible the previous four days.

“I just felt like I was in a good spot beforehand and felt consistent, just trying to keep doing what I was doing four games ago,” Turner said. “I think it’s a little bit of luck, getting a good pitch to hit, but I felt good before and I was just trying to repeat that.”

Josh Bell hit a go-ahead home run in the seventh inning. He and Alcides Escobar had three hits apiece for the Nationals, who rebounded after being swept in four games at home by the Los Angeles Dodgers.

Turner hit a no-doubter into the second deck in left field on the first pitch he saw from Musgrove with one out in the first. It was the 15th for Turner, a first-time All-Star who was drafted by the Padres in the first round of the 2014 amateur draft and then included in a three-team deal that December that brought Myers to the Padres from Tampa Bay.

“It’s huge. He’s something else,” Bell said. “First pitch he sees, it goes out of the ballpark. Every at-bat that he has it seems like he’s either running around the bases or it’s a 3-2 count and he’s making pitchers work. Both sides of the ball he’s definitely something special and it gives us a chance to win with him in the lineup every night.”

“I don’t want to say like completely as Trea goes we go, but he’s a big part of our lineup,” Lester said. “He can do a lot of different things which makes our lineup that much deeper.”

Padres All-Star Fernando Tatis Jr. became the fastest player 22 or younger to hit 27 homers in a season, doing it in 68 games. He did it on the hardest-hit ball of his three-year career, a 116-mph line drive off Lester, the 37-year-old lefty, into the lower balcony on the Western Metal Supply Co. brick warehouse in the left-field corner in the fourth inning.

Tatis’ homer pulled the Padres to 5-4 and fellow All-Star Jake Cronenworth followed with a double to chase Lester. Wil Myers doubled in Cronenworth two batters later to tie it at 5.

Bell regained the lead for the Nats when he homered to left-center off Tim Hill (5-4) with one out in the seventh, his 12th. Escobar added an RBI double in the eighth.

The Nationals took a 5-0 lead against Musgrove after just two innings.

The Nationals scored four runs on four hits off Musgrove in the second, including RBI singles by Lester and Bell.

The Padres scored three unearned runs off Lester in the third. Lester retired Tommy Pham and Tatis before third baseman Starlin Castro’s error allowed Cronenworth to reach. Manny Machado walked and Myers singled to load the bases before Lester hit Trent Grisham with a pitch to bring in the first run. Rookie Kim Ha-seong doubled into left to bring in two more runs.

Musgrove settled down after the second and even had two perfect innings. He allowed five runs and seven hits in five innings, struck out four and walked one.

Tatis, the shortstop, made a sensational leaping catch of pinch-hitter Ryan Zimmerman’s line drive in the eighth. When he came down, he landed on his backside.

The Nationals haven’t named a starter for Tuesday night while the Padres will go with rookie LHP Ryan Weathers (3-2, 2.63).