Pinch-hitter Jorge Alfaro drove in the go-ahead run with a double in the 10th inning, and the Miami Marlins snapped a four-game losing streak with a 3-1 win over the Washington Nationals on Wednesday night.
Listen now to WTOP News WTOP.com | Alexa | Google Home | WTOP App | 103.5 FM
(1/6) 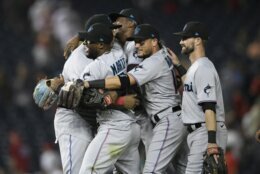 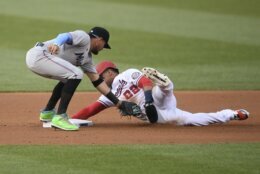 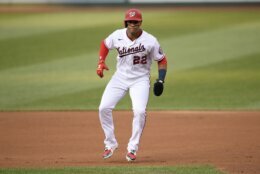 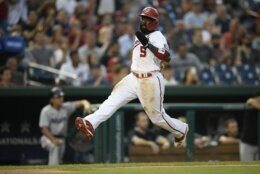 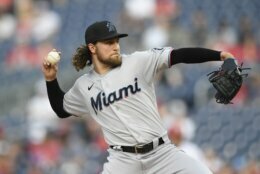 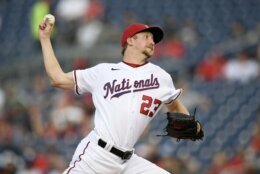 WASHINGTON (AP) — Pinch-hitter Jorge Alfaro drove in the go-ahead run with a double in the 10th inning, and the Miami Marlins snapped a four-game losing streak with a 3-1 victory over the Washington Nationals on Wednesday night.

“After the All-Star break we haven’t played the baseball we would like to be playing,” Flores said. “Being able to get this W tonight with great pitching, playing good for the whole night, and not accepting getting swept by this team is huge.”

Dylan Floro (3-4) pitched two scoreless innings for the victory, and Yimi Garcia worked the 10th for his 14th save

Andrew Stevenson had an RBI-double for Washington, which had its three-game winning streak halted. The Nationals hadn’t scored fewer than four runs in a game since the All-Star break and won the first two games of the series by scores of 18-1 and 6-3.

“I was surprised (by the lack of offense),” manager Dave Martinez said. “We had a couple opportunities. We just didn’t hit the ball tonight. The good news is, Erick Fedde threw the ball really well.”

Fedde, who gave up six runs in 1 1/3 innings against the Padres on Friday and hasn’t won since June 12, allowed one unearned run on four hits in six innings.

“I mean, I’d be lying if I said I wasn’t stressing,” Fedde said. “The last couple have been pretty awful. To get that and give the team a chance to win that game, it’s nice. And it gives me confidence going forward.”

The Marlins loaded the bases against Fedde with no outs in the fourth, but he got Joe Panik to ground into a double play, with a run scoring. Sandy Leon grounded out.

The Marlins recalled right-hander Nick Neidert from Triple-A Jacksonville to make the start in place of Sandy Alcantara, who is on the bereavement list.

The Neidert delivered the longest start of is young career, allowing a run on three hits over five innings and was helped by three double plays.

“I think Nick sets the tone, giving us a good start. It allows you to get to the back end guys. It worked out kind of perfectly,” manager Don Mattingly said. “I think Nick did a great job. He sets the tone and (the bullpen) guys were able to get the outs we needed.”

The Marlins optioned OF Monte Harrison to Jacksonville.

Nationals: 2B Alcides Escobar, who left Tuesday’s game after being hit by a pitch on the right wrist in the sixth inning, was in the lineup. … RHP Stephen Strasburg (neck strain), threw a 27-pitch bullpen session. … OF Kyle Schwarber (right hamstring strain) jogged in the outfield during warmups. … C Yan Gomes (oblique strain) threw in the outfield, but is still unable to hit.

Marlins: The Marlins open a four-game series against the visiting Padres on Thursday. The starter is TBA.