Rockies finally win on the road, beat Giants 7-5 in 10

The Rockies lost their first seven away from Coors Field but manager Bud Black’s ballclub avoided joining the 2009 Washington Nationals, the 2006 Kansas City Royals and the 2003 Detroit Tigers as the only teams in the modern era to drop their first eight road games.

“We’ve had tough losses on the road, close games, a pitch here or there, a big knock here or there. Tonight we got the big knocks,” Black said. “We have to get the big hit when we have the opportunity. Hopefully moving forward we’ll get more. That was a good one.”

Brandon Belt and Brandon Crawford homered for San Francisco. The Giants had won their first four against the Rockies this year before Colorado’s power display over the final two innings.

With Yonathan Daza starting the 10th at second base, McMahon crushed an 0-1 pitch from Gregory Santos (0-2) to center field for his eighth home run this season.

“He had a little cut action on most of his stuff so I was trying to get a good pitch, trying to get on top of it,” McMahon said. “He made a mistake and I didn’t miss it.”

Giants manager Gabe Kapler said Santos left his slider over the middle of the plate.

“McMahon’s a good hitter with pop,” Kapler said. “Santos’ slider is a plus pitch. It got whacked.”

Cron followed with his fourth of the year.

Daniel Bard (1-1) retired three batters and got the win despite his second blown save. Carlos Estevez gave up an RBI single to Buster Posey in the 10th but held on for his first save.

Hampson connected for a pinch-hit homer off Giants closer Jake McGee in the top of the ninth to put the Rockies ahead 4-3 before Crawford tied it in the bottom half with a leadoff shot against Bard that landed in McCovey Cove.

The Giants tied the game on Jason Vosler’s two-out RBI double in the fourth but missed a chance for more due to a baserunning blunder by Mauricio Dubon on the same play. At first base after singling and with the pitcher on deck, Dubon easily advanced to third on the double but kept running and collided with third base coach Ron Wotus, who was in foul territory and had been waving wildly for Dubon to stop. Dubon kept going and was easily tagged out at home.

The game was delayed several minutes in the sixth when plate umpire Kerwin Danley was hit in the mask by a foul ball and left the field. The 59-year-old Danley immediately fell backward, then slowly rolled onto his side and stayed down for several moments as Giants trainers and the other three umpires rushed in. Danley was eventually helped to his feet and slowly walked off the field as the crowd at Oracle Park gave him a standing ovation. Second base umpire Ryan Additon replaced Danley behind the plate.

The Giants acquired outfielder Mike Tauchman from the New York Yankees for left-hander Wandy Peralta and a player to be named.

Kapler said Tauchman’s ability to play all three outfield positions and plate discipline were factors in San Francisco’s decision to trade for the 30-year-old. Kapler was also emphatic that the move was not a reaction to outfielder Mike Yastrzemski’s oblique strain sustained Sunday.

“I think this is a long-term, high-quality add to our major league roster and unrelated to Yaz’s injury,” Kapler said.

Rockies: LHP Kyle Freeland threw a bullpen as he works back from a strain in his pitching shoulder. “I thought it was outstanding. I thought he threw great,” Black said. “Fastball-changeup only but solid velocity on his fastball, solid movement on his changeup.”

Giants: RHP Reyes Moronta threw a third bullpen and used all his pitches. Moronta’s next step in his rehab from a right flexor strain could be a simulated game.

Giants LHP Alex Wood (2-0, 0.75 ERA) faces the Rockies in Wednesday’s series finale. Wood is coming off a stellar start against Miami when he set down 21 of 22 after allowing a leadoff home run. RHP Germán Márquez (1-1, 3.45) pitches for Colorado. Márquez had seven strikeouts in 5 2/3 innings against San Francisco on April 11 but allowed two home runs and lost. 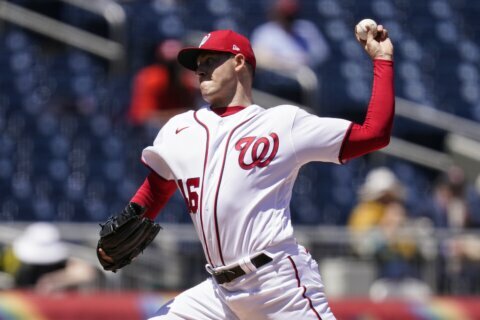 Corbin expected to start for the Nationals against Cubs 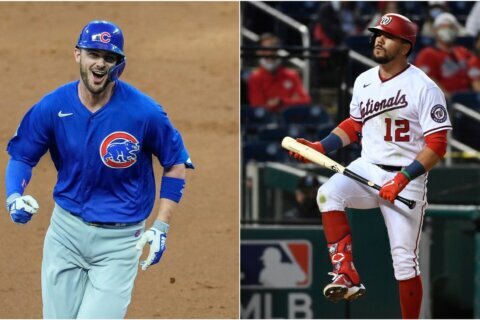 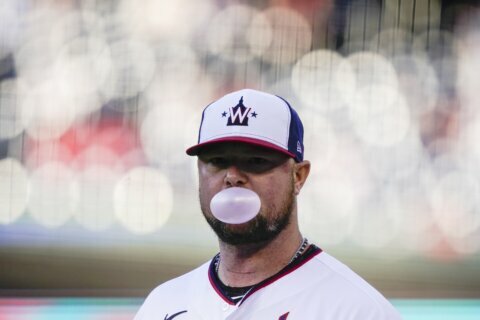