Juan Soto drove in the winning run with a single on a 3-0 pitch in the bottom of the ninth inning Tuesday, lifting the coronavirus-depleted Washington Nationals to a 6-5 comeback victory over the Atlanta Braves after waiting five days to start their season.
Listen now to WTOP News WTOP.com | Alexa | Google Home | WTOP App | 103.5 FM
(1/12) 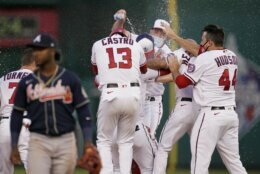 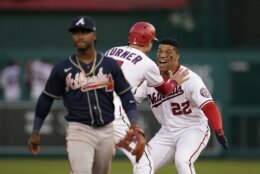 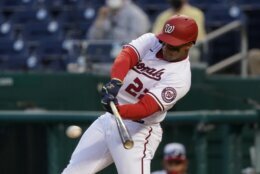 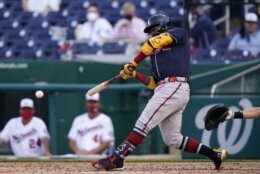 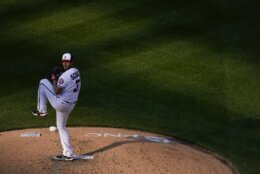 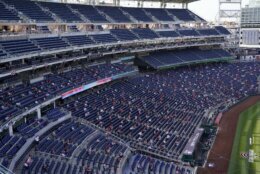 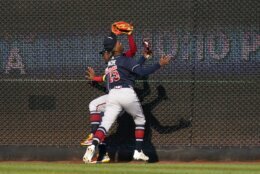 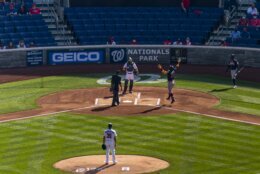 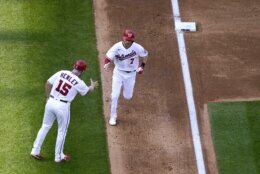 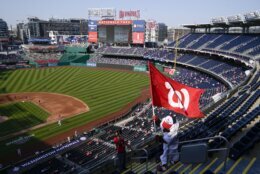 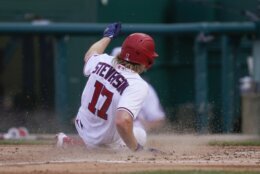 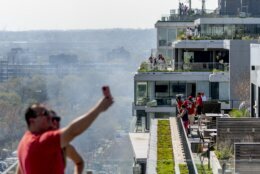 Until Tuesday. Until the coronavirus-depleted Washington Nationals finally started their season, five days later than scheduled because of an outbreak that involved 11 players. Until Soto stepped to the plate in the bottom of the ninth inning with the score tied, two men aboard and what up to then was an 0-for-4 day, and watched three straight balls go by from lefty reliever Will Smith.

“I would have been real upset,” Nationals manager Dave Martinez said, “if he took a 3-0 strike.”

Soto did not, of course. Instead, the 22-year-old lashed a line drive to center field for the first walk-off hit of his quite-accomplished-yet-still-nascent major league career, providing Washington with a 6-5 comeback victory over the NL East rival Atlanta Braves.

“You hate to see him in that situation,” said Braves manager Brian Snitker, whose team is 0-4. “He’s just something else, that kid.”

Soto tossed his red helmet high in the air before being mobbed by teammates who sprinted from the home dugout to meet him near second base, jumping and shouting and dousing him with water.

Cries of “Soto! Soto!” were followed by chants of “MVP!” from an announced crowd of 4,801 — the first spectators allowed at Nationals Park since Game 5 of the 2019 World Series.

Having fans in the stadium, Soto said, “Just made my heart (go) a little bit quicker.”

Quite a finish for the Nationals, whose day did not begin auspiciously.

It began with 10 players getting put on the 10-day injured list as their season finally got going.

Because of a COVID-19 outbreak — four players tested positive; seven were forced into quarantine after potentially being exposed — Washington’s first four scheduled games were scrapped, including three at home against the Mets, followed by Monday against the Braves.

Then came Max Scherzer’s first pitch of 2021, a 94 mph fastball hammered by Ronald Acuña Jr. for the first of four homers the Braves hit off the three-time Cy Young Award winner.

That meant the Braves delivered four solo shots through 10 batters, one more run than they managed to put on the board in three full games combined while getting swept at Philadelphia to begin their season.

“I don’t think anybody is too worried,” Atlanta starter Drew Smyly said about his new team’s start.

Scherzer was throwing to catcher Jonathan Lucroy, who was on his first day on the job with Washington after signing because two players at his position were part of the IL contingent.

Lucroy compared the pitcher-catcher relationship to a marriage — “You’ve got to figure things out” — and likened himself to Keanu Reeves’ quarterback character in the 2000 movie “The Replacements,” about football players who are brought in during a strike.

After falling behind, Washington tied it at 4 with the help of a two-run double by Lucroy, of all people, and a two-run homer to left by Trea Turner in the third.

Scherzer eventually looked more like himself, retiring 12 of the last 13 batters he faced. The righty ended up going six innings and leaving with the score 4-all.

By the time Soto ended things, Scherzer was sitting in the clubhouse, watching on TV, a bit of booze in hand.

“As soon as we got that hit, cracked that beer open,” Scherzer said with a smile.

“Weird, frustrating start, but we won the game,” he said. “That’s what matters most.”

Smyly allowed two earned runs in six innings. … Nationals RHP Daniel Hudson worked around a walk in a scoreless ninth for the win. … 1B Ryan Zimmerman singled twice for Washington after opting out last season. … Smith (0-1) took the loss. Last August, he and Soto had a dust-up in Atlanta. Smith was warming up, thought Soto had moved too close to the plate to watch and angrily waved him away. Soto led off the next inning with a long home run and stared at Smith. As Soto began his trot, Smith yelled at him.

Braves: RHP Chris Martin, who left a relief appearance Sunday because of numbness in his fingers, “feels a little better,” Snitker said, but was not available to pitch Tuesday.

Nationals: RHP Will Harris went on the 10-day IL with right hand inflammation.

The teams play a doubleheader Wednesday. Washington will start Erick Fedde in the first game, Stephen Strasburg in the second. Atlanta planned to go with Max Fried in the opener, and Snitker said Huascar Ynoa probably would pitch the second game. 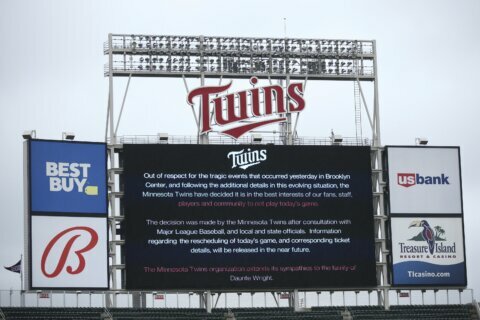 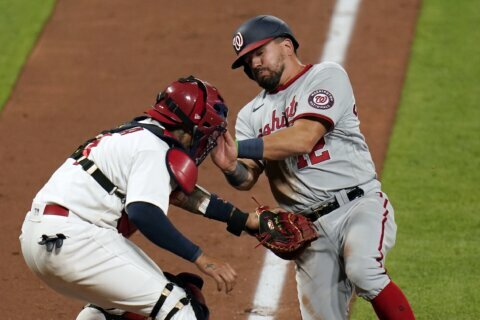