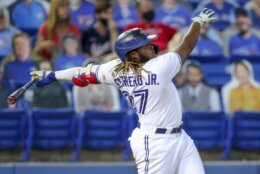 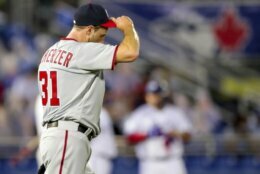 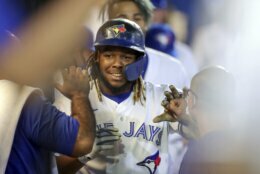 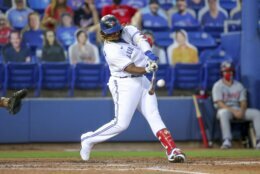 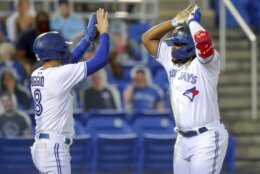 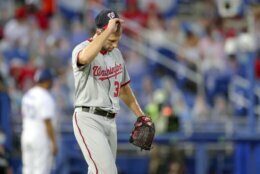 Guerrero hit three home runs, including a grand slam and solo shot off Washington ace Max Scherzer, and had seven RBIs as the Toronto Blue Jays beat the Nationals 9-5 on Tuesday night.

Scherzer (1-2) joined Ivan Nova as the only pitchers to have allowed a homer to both Guerrero Jr. and his slugging father.

“What a day for my boy,” the senior Guerrero said on his Twitter account. “All the hard work is paying off.”

The senior Guerrero also went deep twice against Scherzer, in 2010 with Texas and 2011 with Baltimore in his final season. He finished with 449 homers but never had a three-homer game.

“Looking at Vladdy, he has a good eye,” Nationals manager Dave Martinez said. “He doesn’t chase much as Senior. That’s one big difference I’ve noticed already, he swings at strikes.”

Guerrero’s slam in the third put the Blue Jays ahead 4-3 and ended Scherzer’s scoreless streak at 19 innings.

Guerrero made it 7-3 with his drive in the fifth and added a two-run, seventh-inning shot off Kyle Finnegan to complete his first three-homer game.

“He was locked in,” Blue Jays shortstop Bo Bichette said. “I don’t really think you can really explain how you feel on nights like that. It’s probably just a blur and everything looks in slow motion.”

Scherzer allowed seven runs — five earned — and eight hits over five innings. He had given up one earned run in 19 innings over his previous three starts.

“I did not pitch well tonight, that’s obvious,” Scherzer said. “I didn’t execute.”

Trea Turner, hit on the left forearm by a pitch Sunday, homered twice for the Nationals. It was his seventh multihomer game and second this year, with the other coming April 18 against Arizona.

Ryan Zimmerman got Washington within 7-5 on a two-run homer in the seventh.

Turner led off the game a home run and hit a solo drive in the third against Trent Thornton. The shortstop was hit by reliever Anthony Castro’s pitch during the fifth but stayed in the game.

Castro entered in the fourth with the bases loaded and got an inning-ending double play from Victor Robles.

Yadiel Hernandez put Washington up 3-0 with a third-inning homer off reliever Tommy Milone (1-0).

It was the first game of the Blue Jays’ second homestand at TD Ballpark, their spring training facility in Dunedin, Florida. Toronto is set to play at least through May at the park.

One reason to remain in Florida and not start the season at their Triple-A park in Buffalo, New York, which hosted games last season, was the weather. The game time temperature was 81 degrees under clear skies with a refreshing breeze blowing out at 10 mph.

“It’s weird,” Turner said. “The clubhouse and everything is actually really nice. I think they did a good job.”

Nationals: RHP Stephen Strasburg (right shoulder) is throwing at 150 feet on level ground. … OF Juan Soto (left shoulder) is hitting but hasn’t resumed throwing. … LHP Jon Lester (COVID-19) threw six innings in a simulated game Sunday and is being evaluated for his next step. 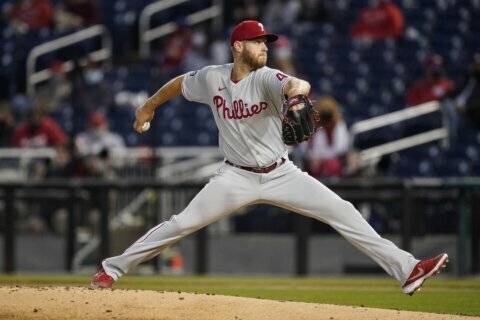