MIAMI (AP) — Brian Anderson circled the bases so quickly after his second home run Friday that he nearly overtook Jesus Aguilar, who playfully motioned his teammate to slow down.

No need to rush. Anderson and the Miami Marlins are on pace to end their 17-year playoff drought.

Anderson had three homers and seven RBIs, matching the franchise record in both categories, and Miami earned a doubleheader split by beating the Washington Nationals 14-3.

The Marlins remained in second place in the NL East as they chase their first playoff berth since 2003. They’re 3 1/2 games behind first-place Atlanta, and a half-game better than third-place Philadelphia.

Anderson’s third homer was a three-run shot in the sixth inning against infielder-outfielder Brock Holt, pitching in a mop-up role.

“Getting a position player on the last one, that’s a little cheap,” Anderson said, “but I’m going to take them any way you can get them right now.”

Anderson also homered leading off the second and hit a three-run shot in the fifth, increasing his season total to nine homers. That gave him plenty of chances to practice his home-run trot.

“Agui says I run too fast,” Anderson said with a smile. “He says I need to enjoy them a little bit more. I just don’t want to show anybody up.”

The Marlins matched their season-high run total after they were shut out in the opener. Erick Fedde allowed one hit in six innings as Washington beat highly touted rookie Sixto Sanchez 5-0.

“We’ve got a bunch of young guys who are really resilient,” Anderson said. “For us it’s just a matter of keep fighting. That’s what our guys have been doing.”

The Nationals were swinging early in the count against Sanchez (3-2). He had given up a total of six runs in his first five career starts, but allowed eight hits and five runs in four innings.

“I thought he was fine, honestly,” Miami manager Don Mattingly said. “It seemed like every ball they hit found a hole, and they had a pretty good game plan with him.”

Washington was the first opponent to face Sanchez for a second time.

“You don’t want to get deep in counts against that guy,” Nationals catcher Yan Gomes said. “He’s a tremendous young guy. We were just trying to get something early in the count and do the damage we can.”

Gomes and Luis Garcia each had two hits and scored twice. Andrew Stevenson, recalled before the game from the Nationals’ alternate training site, had a two-run single for his first hit this year.

“I was able to be really effective inside, and it opened up the down and away,” Fedde said. “It’s nice when you can hit your spots consistently and get the calls. A good day.”

Anderson joined Mike Lowell (2004) and Cody Ross (2006) as the only Marlins with a three-homer game. But it was Miguel Rojas’ 20-foot RBI dribbler with the bases loaded and two out that helped blow open the nightcap in the third inning.

Pitcher Kyle McGowin gloved the ball and shoveled it to catcher Kurt Suzuki, but the runner was safe. Lewis Brinson followed with a two-run single for a 6-2 lead.

Corey Dickerson had three hits, including a leadoff homer in the first, and drove in two runs. Yimi Garcia (3-0) got two outs as four Marlins pitchers combined on a six-hitter.

Nationals: Holt took the mound when RHP Aaron Barrett left in the sixth because of triceps tightness. … SS Trea Turner left the second game in the sixth inning, and manager Dave Martinez said the move was made to give him a little rest.

“It’s fitting for how my year has gone to end on that note,” he said. “It has been a trying year, to say the least.”

Nationals: Holt was reinstated from the paternity list, and OF Yadiel Hernandez was optioned to the alternate training site.

Nationals: LHP Patrick Corbin (2-5, 4.10 ERA) is scheduled to start Saturday in the third game of the series. 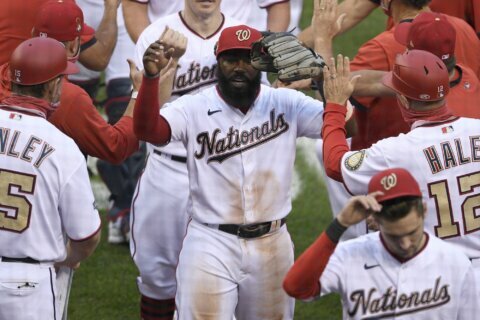 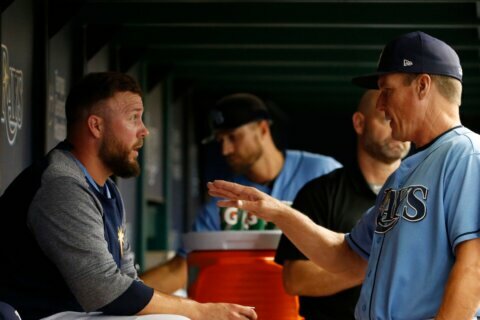