Anthony Rendon eager to team up with Trout in Angels’ lineup 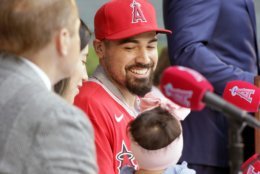 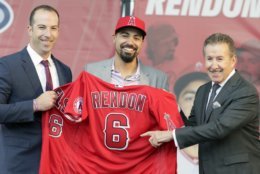 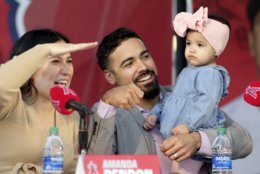 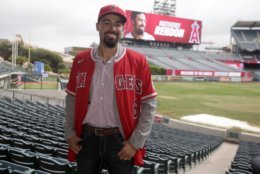 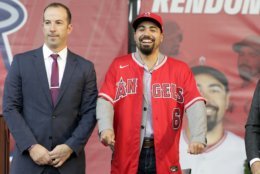 “Based on his exclamation points in his texts, he seemed really excited,” Rendon said with a grin.

Two of the majors’ best hitters are forming a well-paid partnership in Orange County, and they are both excited to reward Angels owner Arte Moreno’s largesse with postseason success.

The Angels formally introduced Rendon at Angel Stadium on Saturday, welcoming the championship-winning slugger to their star-studded lineup.

But the World Series star insisted his lavish new contract — a seven-year deal with the biggest average annual value ever given to a third baseman— wasn’t as important as the words he heard from Moreno, the Angels’ 73-year-old owner.

“Arte and Carol (Moreno) were really adamant about reaching out to Scott and saying they wanted me to be a part of the Angel organization,” Rendon said while holding his daughter, Emma, and sitting next to his wife, Amanda.

“That meant a lot to me and my family, to have that respect, to really feel wanted,” Rendon added. “That was one important thing that we always talked about trying to look for in an organization where we wanted to head to or stay at, was a family atmosphere, somewhere that we could plant our roots in, lay a foundation and just grow our family together.”

Moreno has been following Rendon’s career since the native Houstonian was a collegiate slugger at Rice, where Moreno had friends in athletic administration. Moreno followed Rendon’s rise with the Nationals up to last season, when he led the majors in RBIs and earned his first All-Star selection before repeatedly coming up with clutch hits during Washington’s improbable playoff run.

“Historically the way he’s played, his background, everything felt like a really great fit for what we’re trying to accomplish here,” Moreno said.

After his spectacular 2019 season, Rendon is leaving the World Series champions for a franchise that hasn’t won a postseason game since 2009 despite annually fielding a high-priced roster around Trout, who won his third AL MVP award this year.

Rendon joins a lengthy list of elite veteran ballplayers lured to Anaheim or persuaded to stay here by Moreno, who bought the Angels one year after they won their only World Series championship and has attempted to recreate that success ever since.

Moreno has never been shy about spending his personal fortune and his income from a team that annually draws more than 3 million fans to Angel Stadium.

But while Vladimir Guerrero and other free agents performed splendidly under the halo, Moreno has received disappointing results with many of his big-ticket acquisitions — from Gary Matthews Jr. and Vernon Wells to the disastrous $125 million deal with Josh Hamilton, and even eight years of steady, but underwhelming production from Pujols, the $240 million slugger.

There’s little reason to think Rendon isn’t worth the money for a team eager to start winning immediately. The 29-year-old Rendon is still squarely in his baseball prime, and the Angels’ flamboyant acquisition of the best hitter on the free agent market fits with Moreno’s desire to make his team more exciting for his loyal fans after four consecutive losing seasons.

Moreno acknowledged he was determined to land either Rendon or ace Gerrit Cole, who got a $324 million deal from the Yankees.

“Anthony was a player we targeted early,” Angels general manager Billy Eppler said. “Very rarely in free agency do you see significant impact, and this winter it appeared there was a number of players that could provide impact, but Anthony was somebody we highlighted. We’re still targeting pitching, but when the opportunity arose for us to do something with Anthony, it was a pretty easy sell for Arte because he does hold Anthony in very high regard.”

Rendon will wear No. 6, the same uniform number he wore in Washington, after getting it from new teammate David Fletcher. The up-and-coming second baseman is likely to team with Rendon and Simmons in one of the better defensive infields in the AL.

Rendon cashed in spectacularly in free agency, but he is grateful the Angels aren’t done going after free-agent starting pitchers to fill out the rotation that was Los Angeles’ biggest weakness last season.

“Talking to Scott about it, he’s had a lot of interaction with Arte, and he says these guys always want to win,” Rendon said. “They’re always going to go for it. They want to build a great team, even though they’ve already got great players on the field.” 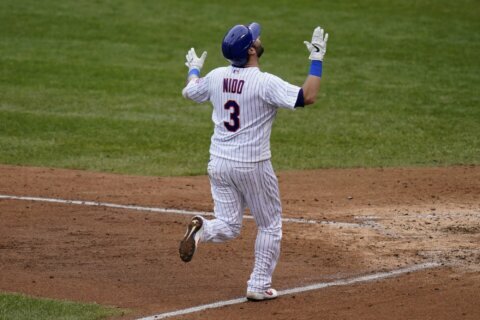 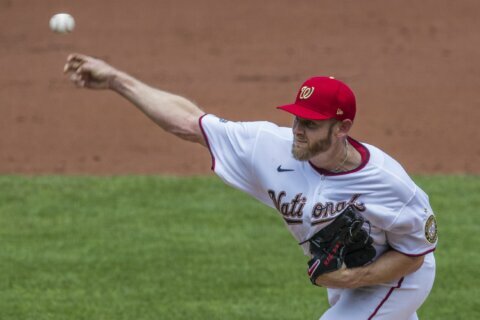 Nationals’ Strasburg ejected for arguing – from the stands 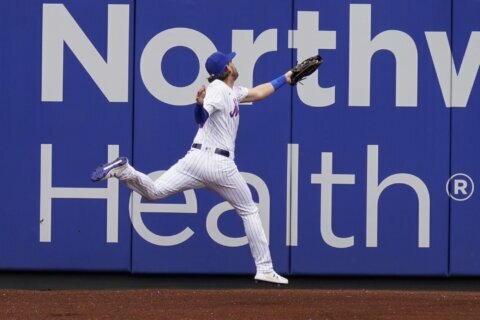 Mets’ McNeil carted off vs. Nats after crash into wall