Max Scherzer followed Aníbal Sánchez's near no-hitter with a try of his own and the stingy Washington Nationals beat the St. Louis Cardinals 3-1 on Saturday for a 2-0 lead in the NL Championship Series.
Listen now to WTOP News WTOP.com | Alexa | Google Home | WTOP App | 103.5 FM
(1/11) 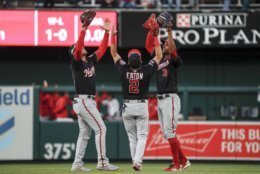 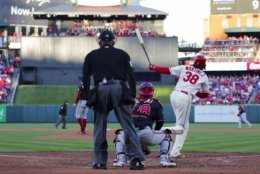 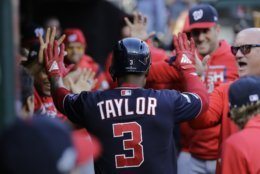 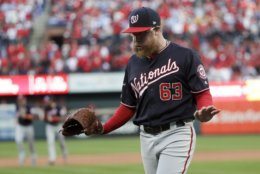 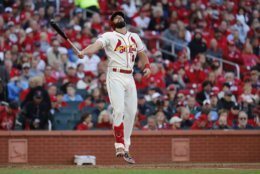 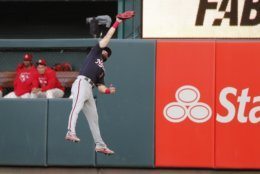 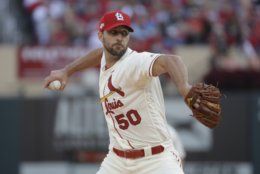 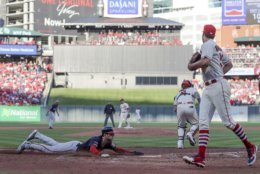 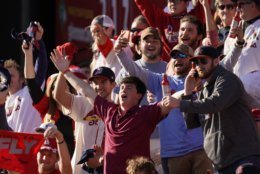 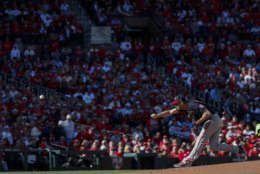 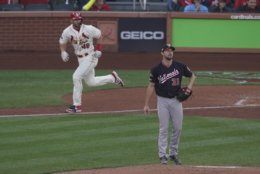 Scherzer followed Sánchez’s near no-hitter with a try of his own, and the stingy Nationals beat the St. Louis Cardinals 3-1 on Saturday for a 2-0 lead in the NL Championship Series.

“We really want to win here,” the hard-charging Scherzer said. “So that’s what’s going to happen, we’re going to compete and win.”

Scherzer didn’t allow a hit until Paul Goldschmidt led off the seventh inning with a single that left fielder Juan Soto played conservatively with a 1-0 lead. A day earlier, Sánchez held the Cardinals hitless until José Martínez had a pinch single with two down in the eighth.

Sánchez and Scherzer also began the 2013 ALCS with consecutive no-hit bids of at least five innings for Detroit against Boston. They are the only pitchers to accomplish the feat in postseason history.

“The way he can change speeds and execute pitches, it’s a treat to really watch and get to pitch with him,” Scherzer said. “For me, I’m just in the moment. I’m not trying to do anything great, I’m just trying to stick within my game.”

Scherzer, a St. Louis native who played college ball for the University of Missouri, struck out 11 and walked two in seven innings.

It doesn’t get any easier for St. Louis, either. Ace Stephen Strasburg gets the ball for the wild-card Nationals when the best-of-seven series moves to Washington for Game 3 on Monday night. Jack Flaherty pitches for the Cards.

“I’ve got a lot of confidence in our hitters. I think our hitters are going to do something special in Washington.”

St. Louis got another solid performance from Wainwright, who struck out 11 in 7 1/3 innings.

But after getting only one hit in the opener, the Cardinals’ inconsistent lineup managed just three hits against Scherzer and the Washington bullpen.

“We trust in each other. We’ve been in this position before,” Cardinals catcher Yadier Molina said. “We just have to figure out how to get better.”

The NL Central champions got their first run of the series when center fielder Michael A. Taylor misplayed Martínez’s pinch-hit liner into an RBI double with two outs in the eighth. But Dexter Fowler flied out on Sean Doolittle’s next pitch on a tough day to see the ball with the shadows from the mid-afternoon start.

Patrick Corbin got the first out of the ninth before Daniel Hudson earned his third save of the playoffs. The right-hander was reinstated from the postseason paternity list before the game after he missed the series opener to be with his wife, Sara, for the birth of their third child, a girl named Millie.

Corbin is expected to start Game 4 for the Nationals on Tuesday night.

Scherzer, who has pitched two no-hitters in the regular season, has a record five career postseason no-hit bids of at least five innings, according to the Elias Sports Bureau. The three-time Cy Young Award winner came closest to finishing in Game 3 of the 2017 NL Division Series, getting one out in the seventh inning before allowing a hit.

There have only been two postseason no-hitters. Don Larsen threw a perfect game for the New York Yankees against Brooklyn in the 1956 World Series, and Roy Halladay pitched a no-hitter for the Philadelphia Phillies in the 2010 NL Division Series.

“It’s a good ballclub, but we’ve got great pitchers,” Taylor said. “They went out and executed pitch after pitch.”

The Cardinals got one baserunner into scoring position while Scherzer was on the mound. Kolten Wong walked with one out in the first and stole second, but Goldschmidt and Marcell Ozuna struck out.

After Goldschmidt’s hit, Ozuna struck out again and Molina bounced into an inning-ending double play on Scherzer’s final pitch of the afternoon.

Washington went ahead to stay when Taylor homered on Wainwright’s first pitch of the third. The Nationals added two more on Adam Eaton’s double down the first-base line with one out in the eighth.

“This is really, it’s not just one guy carrying this team or two guys,” Scherzer said. “It’s really just a collective of everybody out there doing their job.”

It was the second postseason game in major league history in which each starter recorded more than 10 strikeouts. Jacob deGrom (13 Ks) and Clayton Kershaw (11 strikeouts) also accomplished the feat in Game 1 of the 2015 NLDS.

Nationals: C Kurt Suzuki returned to the starting lineup after being sidelined by a head injury. He got hurt by a foul ball that ricocheted during Washington’s clinching victory in Game 5 of the NLDS against the Dodgers on Wednesday night. … OF Victor Robles was out of the lineup again because of a strained right hamstring. He got hurt in Game 2 against Los Angeles.

Flaherty struck out eight in six innings in St. Louis’ 13-1 victory over Atlanta in Game 5 of the NL Division Series on Wednesday. The right-hander turns 24 on Tuesday.

Strasburg made two starts against St. Louis this season, going 1-0 with a 2.31 ERA. He has allowed four runs in 15 innings in the playoffs.