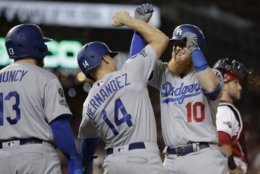 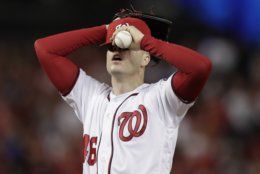 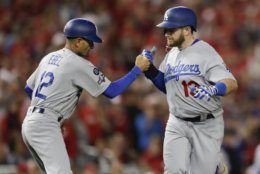 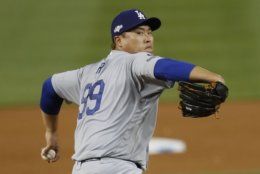 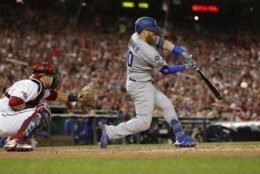 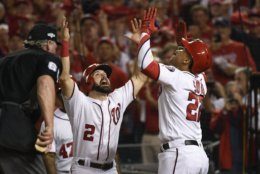 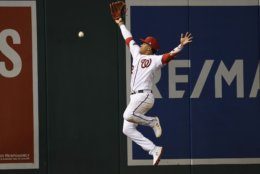 WASHINGTON (AP) — David Freese wasn’t in the Los Angeles Dodgers’ starting lineup for Game 3 of the NL Division Series. Neither was Kiké Hernández or Chris Taylor.

All are right-handed batters, and all knew that if the Washington Nationals persisted in their playoff pattern of using starters in relief, they might very well be called upon to pinch hit against $140 million lefty Patrick Corbin.

So in the first inning Sunday night, that trio headed to the indoor batting cage that sits near the staircase leading from the visitors’ dugout to the clubhouse to try to prepare. And, boy, were they prepared when Corbin entered. So were other Dodgers hitters, producing a postseason inning unlike any other: seven runs, all scored with two outs and two strikes.

Justin Turner’s three-run homer capped a startling and record-setting rally in the sixth as the Dodgers roughed up the starter-turned-reliever and beat Washington 10-4 to grab a 2-1 lead in their best-of-five NLDS.

“We’re just always ready, no matter who’s on the mound. Righty, lefty. You’ve got to fake it sometimes, whether you’re ready or not,” said Freese who singled as a pinch hitter in the sixth and finished with four hits.

“Definitely, two strikes, you’ve got to take it seriously. You can’t assume your AB’s over,” Freese said. “You look at the best guys in the game … they look like they like two strikes.”

Hernández also entered in that inning and contributed a two-run double, and Taylor walked as a pinch hitter against Corbin.

Russell Martin started, his first appearance of these playoffs, and hit a two-run double in the sixth as LA became the first team in major league history to score seven two-out, two-strike runs in one postseason inning.

“We never doubt ourselves,” Freese said.

Martin, who like Freese is 36, tacked on a two-run homer in the ninth. This is Martin’s 10th postseason — Freese joked it might be his teammate’s 26th — and Freese’s sixth.

The Dodgers can advance to the NL Championship Series for the fourth consecutive year by closing the best-of-five NLDS in Game 4 at Washington on Monday, when LA sends Rich Hill to the mound against Max Scherzer.

And to think: Things were not looking all that good for the Dodgers, who entered the sixth trailing 2-1 after Juan Soto’s two-run homer off eventual winner Hyun-Jin Ryu in the first and Max Muncy’s solo shot off Washington starter Aníbal Sánchez in the fifth.

That seemed to wake up LA’s offense.

Well, it was either that or the fact that Sánchez, who struck out nine, was gone to begin the sixth. In came Corbin, the lefty who started — and lost — the opener and hadn’t made a relief appearance since 2017, when he only made one.

“Just couldn’t seem to get that third out there,” Corbin said. “Just stinks.”

It continued Nationals manager Dave Martinez’s postseason penchant for pushing his starters to appear in relief, deemed necessary because of his club’s NL-worst bullpen. The strategy had been working.

Needless to say, not this time against the Dodgers, who lost in the World Series each of the past two years and led the NL with 106 wins this season, 13 more than the Nationals.

“Aníbal was at 87 pitches. He gave us all he had. We were at a good spot in the lineup, where we thought Corbin could get through it,” Martinez said. “And his stuff was good. … But he had every hitter 0-2. He just couldn’t finish.”

After Cody Bellinger snapped his 0-for-8 start to the series with a single — he would add a double later in the inning — Corbin struck out the next two hitters. That’s when it all fell apart for Washington.

Freese, the MVP of the 2011 NLCS and World Series for St. Louis, singled to put runners on the corners.

“He has to be going down as one of the greatest October players of all time,” Muncy said. “I don’t care what anyone says. He has to be.”

Martin came through on a 2-2 slider that landed on the warning track in left-center, putting the visitors ahead 3-2. Hernández connected on a 1-2 slider for yet another two-run double to left-center, a hit off the base off the wall.

After Muncy was intentionally walked, Wander Suero entered and promptly served up a full-count fastball that Turner lofted to the back of the visiting bullpen beyond left field, making it 8-2.

“A couple guys came up and had really big at bats and that’s what we’ve been doing all year,” Muncy said. “That was one of those things where once one guy started doing it, the next cat picked up on it and it just kind of rolled throughout the inning.”

With baseball’s ERA leader this season, Ryu, done after going five innings and allowing two runs, Dodgers manager Dave Roberts pieced together the remaining 12 outs with five relievers. That included closer Kenley Jansen, who hadn’t pitched in a game since Sept. 28. He threw a 1-2-3 ninth that included a pair of strikeouts.

Nationals: CF Victor Robles was out of the lineup with a strained right hamstring after getting hurt running to first base in Game 2. Michael A. Taylor started in Robles’ place and went 1 for 4.

Three-time Cy Young Award winner Scherzer was pushed back from Game 3 to Game 4. Scherzer entered these playoffs with his teams having lost his most recent seven postseason appearances, but Washington is 2-0 when he pitches so far this October, including a start in the NL wild-card game against Milwaukee and a one-inning, three-strikeout relief appearance in Game 2 at Los Angeles. That bullpen use led the Nationals to switch Scherzer’s start from Sunday to Monday. “He can beat you in the strike zone with three pitches. He can beat you out of the zone,” Roberts said. “He’s relentless.” Hill went 4-1 with a 4.25 ERA this season in just 13 starts; he spent time on the IL with a sprained right knee and a strained left forearm, activated for the last time less than a month ago. Hill hasn’t pitched more than three innings in an appearance since June. “Pitch count, whatever it is, I can’t control that,” the 39-year-old Hill said. “Whatever I can give the team, I’m going to give the team.”