Stephen Strasburg was dominant in his final regular-season start and the Nationals held their lead in the NL wild-card chase, beating the Philadelphia Phillies 6-3 on Thursday to sweep the five-game series.
Listen now to WTOP News WTOP.com | Alexa | Google Home | WTOP App | 103.5 FM
(1/6) 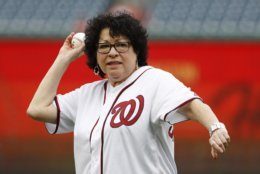 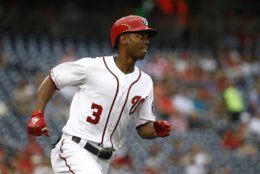 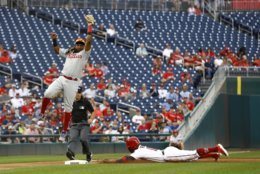 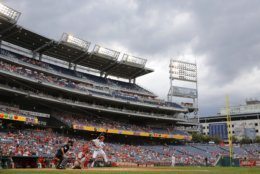 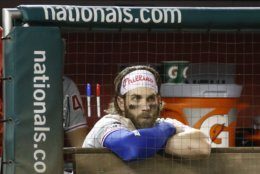 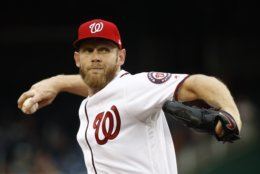 WASHINGTON (AP) — Washington Nationals’ ace Stephen Strasburg turned in another vintage outing in what has been one the finest seasons of his career.

Strasburg was dominant in his final regular-season start and the Nationals held their lead in the NL wild-card chase, beating the Philadelphia Phillies 6-3 on Thursday to sweep the five-game series.

The Nationals remained one game ahead of Milwaukee, which topped Cincinnati 5-3, atop the wild-card race.

Strasburg (18-6) allowed one run on four hits in six innings while striking out 10. He fanned Bryce Harper three times on his way to a career-best 251 strikeouts this season.

Strasburg set a career high for wins this year and had a 3.32 ERA. Both Strasburg and fellow ace Max Scherzer would have at least regular rest for the NL wild-card game against either Milwaukee or St. Louis on Tuesday.

Manager Dave Martinez said he wouldn’t name his starter for the wild-card until Saturday, which leaves open the option that Strasburg could appear in relief.

“Yeah, I mean I’m just here to help the ballclub in any way possible,” Strasburg said when asked if he could appear as a reliever in the postseason. “It’s going to take all 25 of us.”

After Harper said the heckling from Nationals fans went over the line Wednesday night, he drew a mix of boos and cheers his first time up. The former Washington star was then booed in the rest of his at-bats.

“I think today against Harp, but really against anyone, (Strasburg)’s got all plus pitches that he can strike people out with,” Nationals catcher Yan Gomes said.

“Today just happened that everything was working, we were able to set up Harp the way we wanted to and finish him off.”

Michael A. Taylor hit his first homer in over a year for the Nationals, who completed the first five-game sweep in franchise history. Washington went 14-5 against Philadelphia this season, including the final nine at home after dropping the first meeting on April 2.

César Hernández hit his 13th homer and Andrew Knapp also connected as the Phillies lost their sixth straight and fell below .500 for the first time this season at 79-80.

Taylor hit a solo homer in the second off Jason Vargas (7-9) to give the Nationals a 2-0 lead. It was his first home run since Aug. 9, 2018. Taylor later added a double and a single for his first three-hit performance of the season.

The Nationals scored three more in the fifth on a bases-loaded walk, a wild pitch and a passed ball to increase their lead to 5-1. Daniel Hudson earned his eighth save overall and sixth for Washington with a scoreless ninth.

When asked if he understood how restless the Philadelphia fan base was becoming with possibly a seventh straight losing season in the works, Phillies manager Gabe Kapler answered “absolutely.”

“I can fully understand disappointment right now. Everybody in that room is disappointed. I’m extremely frustrated and disappointed myself. We’re all feeling this together.”

Kapler has shut down ace Aaron Nola ahead of what would have been his last scheduled start of the season on Sunday against Miami. Nola will finish the season 12-7 with a 3.87 ERA in 202 1/3 innings pitched. It’s the second straight season he’s pitched more than 200 innings.

Accompanied onto the field by Juan Soto, Supreme Court Justice Sonia Sotomayor threw out the first pitch to Martinez.

Phillies: SS Jean Segura left in the fifth inning with a right ankle sprain and was replaced by Sean Rodríguez

Nationals: C Kurt Suzuki (right elbow) worked out again on Thursday throwing the ball and could catch as soon as Friday. “He’s about 90 to 95 percent,” manager Dave Martinez said. “If he feels good it’s possible that he might play five, six innings tomorrow just to get him back out there and get him in that baseball routine again.” Suzuki entered Thursday as a pinch-hitter in the seventh inning and flied out. He last started a game on Sept. 5.

Phillies: RHP Vince Velasquez (7-8, 4.76 ERA) makes his final start of the season as Philadelphia hosts Miami. Velasquez is 4-3 with a 4.06 ERA in 14 careers starts against the Marlins.

Nationals: RHP Austin Voth (1-1, 3.35 ERA) takes the mound at home against AL playoff-contending Cleveland in the final series of the regular season.