The Washington Nationals continued their surge into the playoffs by stretching their winning streak to a year-high eight games with an 8-2 victory Sunday over the eliminated Cleveland Indians. Washington will host the NL wild-card game Tuesday night against the Milwaukee Brewers.
Listen now to WTOP News WTOP.com | Alexa | Google Home | WTOP App | 103.5 FM
(1/5) 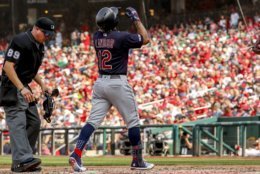 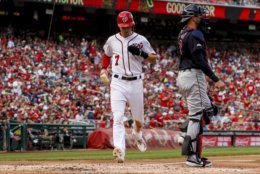 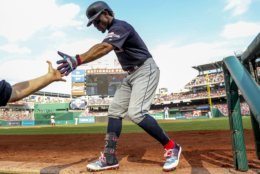 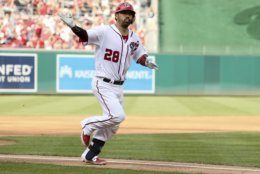 WASHINGTON (AP) — It’s been more than a century since a major league team went from 12 games under .500 to as many wins as the Washington Nationals accumulated this season.

And the Nationals are surging into the playoffs, running their winning streak to a year-high eight games with an 8-2 victory Sunday over the eliminated Cleveland Indians in a regular-season finale that meant nothing to either club.

“Getting everything ready, everything set. Just keep it rolling,” said left fielder Juan Soto, who’s been struggling at the plate but delivered an RBI double in the first. “I can tell you we’re ready for the playoffs.”

Washington, which finished 93-69 after starting 19-31, will host the NL wild-card game Tuesday night against the Milwaukee Brewers.

“No matter how you start, the objective is to get to the postseason. The boys did that,” Washington manager Dave Martinez said. “We can all sit here and say, ‘Hey, it was ugly in the beginning.’ But they stepped up and endured a lot and we’re going to the postseason.”

He juggled his lineup a bit, resting a handful of regulars and allowing others to depart after two or three plate appearances. Catcher Kurt Suzuki — who missed most of September with a bad right elbow — hit his 17th homer, a two-run shot in the third inning. Brian Dozier and Gerardo Parra each drove in two runs in the sixth, and Parra tacked on a run-scoring hit in the eighth.

Parra, whose spot on the postseason roster has been in doubt, is 7 for 9 with 11 RBIs over the last three days.

“Suzuki was the big question mark, whether he could catch. The last two days, he proved he was good to go, and he’s swinging the bat well,” Martinez said. “Everybody’s healthy and we’re ready to go.”

Mike Clevinger (13-4) was charged with six runs over 5 2/3 innings and failed to collect what would have been a career-best 14th win.

“I went into it trying to have some fun,” Clevinger said, “and it wasn’t a whole lot of fun.”

The Nationals finished second to Atlanta in the NL East with an 11-win improvement over 2018, when they missed the playoffs in Martinez’s rookie year as a skipper. They did it without a winning streak longer than five games until now. According to the Elias Sports Bureau, via the Nationals, Washington’s 93 wins are the most for a team that was 12 games below .500 since the 1914 Boston Braves went from 28-40 to 94 wins.

Before Sunday, Washington didn’t know whether it would face Milwaukee or St. Louis on Tuesday. But St. Louis wrapped up the NL Central title by beating the Chicago Cubs 9-0, relegating Milwaukee to a wild-card spot.

The Indians, meanwhile, were officially knocked out of postseason contention Friday and closed with a five-game losing skid. Still, their 93-69 mark is better than the 91-71 record a year ago, when Terry Francona’s team won its third consecutive AL Central title.

“Are we where we want to be? No,” Francona said, “but we’re not going to quit until we get there.”

BARRETT BACK AT HOME

Washington RHP Aaron Barrett entered in relief in the seventh, his first appearance at Nationals Park since August 2015. He had Tommy John reconstructive elbow surgery later that year, then broke his pitching arm in 2016 and missed all of 2017 and 2018. He was called up from the minors this month to make his return to the majors and pitched in two games for Washington — both on the road.

“Definitely a special moment, for sure,” Barrett said.