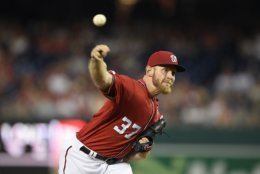 WASHINGTON (AP) — In the middle of a pennant race, Stephen Strasburg gave his manager a chance to relax.

Strasburg (16-6) set a career high for wins while retiring 22 straight after allowing two first-inning singles. The right-hander did not walk a batter while throwing 107 pitches, and he also contributed an RBI single at the plate.

“I was able to sit down for part of the game and watch him,” Nationals manager Dave Martinez said. “I’m proud of what he’s done this year. He’s fun to watch. You’ve still got to manage the game, but he’s fun to watch.”

“Fastball command was pretty good,” Strasburg said. “I was able to throw my curveball for a strike when I wanted to and changeup was pretty good as well.”

Juan Soto and Kurt Suzuki also homered for the NL wild card leaders, who have won three straight and eight of nine after completing a 19-7 August.

The Marlins extended the franchise record with their 14th consecutive road loss.

Miami’s Pablo López (5-7), making his second start since returning from a strained right shoulder that kept him out for more than two months, allowed six runs and six hits in three innings.

“If you don’t have anything working other than your fastball, and if you can’t locate your fastball very well, then you run into some problems like I did tonight.”

Rendon, who hit a game-ending single during Friday night’s 7-6 victory over Miami, opened the scoring with his 30th homer with two out in the first.

The 20-year-old Soto followed with his 30th homer, another shot to left.

“They work really good at-bats and they can beat you in many ways,” Martinez said of Rendon and Soto. “They both hit the long ball, but they both hit doubles, they both go the other way. They can take their walks.”

Strasburg singled in Suzuki in the second, and Suzuki’s two-run homer in Washington’s three-run third made it 6-0.

Rendon added a solo shot in the eighth for his third multihomer game of the season.

Rendon and Soto are the first Nationals teammates to each hit 30 homers in the same season since Adam Dunn (38) and Ryan Zimmerman (33) in 2009.

Nationals: RF Adam Eaton, who was hit below the right knee by a pitch on Wednesday, was again out of the lineup but available off the bench. … Closer Sean Doolittle (right knee tendinitis) and 1B Ryan Zimmerman (plantar fasciitis) are expected to be activated when the rosters expand on Sunday.

Marlins: LHP Caleb Smith (8-8, 4.05 ERA) has allowed five or more runs in consecutive starts for the first time in his career. He’s 1-1 with a 6.00 ERA in two career starts against Washington, both this season.