Anthony Rendon homered and had four hits, including an RBI single in the 11th inning, and the Washington Nationals beat the Chicago Cubs 7-5 on Sunday for their fifth straight victory.
Listen now to WTOP News WTOP.com | Alexa | Google Home | WTOP App | 103.5 FM
(1/4) 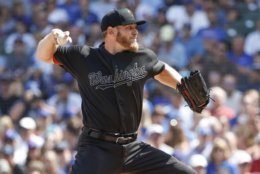 He’s making quite a case by himself.

Rendon homered and had four hits, including an RBI single in the 11th inning, and the Nationals beat the Chicago Cubs 7-5 on Sunday for their fifth straight victory.

Juan Soto added three hits and Stephen Strasburg struck out 10 in six innings, helping Washington finish off its first sweep of Chicago since September 2012. The Nationals outscored the Cubs 23-10 in the three-game series.

“We just battle until the very end,” Strasburg said.

Kyle Schwarber, Addison Russell and Victor Caratini homered for Chicago, which had won five in a row before Washington rolled into town. Cole Hamels pitched two-run ball into the sixth, helped by a couple of strong defensive plays behind him.

The Cubs fell four games behind Washington for the top spot in the wild-card standings.

“They worked some tough at-bats in moments,” Chicago manager Joe Maddon said. “The big difference is they weren’t chasing out of the zone and we were. That’s the difference in the series, primarily. I give them credit.”

Washington grabbed the lead for good when Howie Kendrick scored on Tyler Chatwood’s wild pitch with Rendon at the plate in the 11th. Rendon then drove in Trea Turner with a single to left off Chatwood (5-2).

Daniel Hudson (7-3) pitched two perfect innings for his first win since he was acquired in a July 31 trade with Toronto.

“What Daniel Hudson did for us those last two innings was really incredible,” Martinez said.

The Cubs played without Anthony Rizzo, who was sidelined by tightness in his back. The big first baseman is day to day after leaving Saturday’s 7-2 loss in the fifth.

Kris Bryant hit a tying single off Strasburg in the sixth, but the Nationals responded with three in the seventh. Soto made it 3-2 with a run-scoring single, and Asdrúbal Cabrera drove in two more with a base hit to right.

Chicago then went to work against Washington’s beleaguered bullpen.

Caratini homered against Hunter Strickland in the seventh. After Javier Báez walked with two outs in the eighth, Schwarber tied it at 5 with a drive to left-center off Fernando Rodney for his 30th homer .

The crowd of 40,518 roared as Schwarber rounded the bases, but that was it for Chicago. Nicholas Castellanos flied out to the warning track in center for the first out in the 10th.

“I missed it by a tiny bit, but there was a lot of wind,” Castellanos said.

Rendon put Washington in front when he opened the fourth with a long drive to left on an 0-2 pitch from Hamels. The All-Star third baseman is batting .415 (22 for 53) during a 12-game hitting streak.

“I feel the exact same. … I just try to keep it simple,” Rendon said. “I try to stay inside the ball and I try to put the barrel on it. I try not to do too much.”

For a while, it looked as if Rendon’s 29th homer might be enough for Strasburg. But Russell tied it in the fifth, hitting a two-out drive into the basket in left for his seventh homer.

Strasburg is up to 201 strikeouts this year, second-most in the NL behind Mets ace Jacob DeGrom. Strasburg has surpassed 200 strikeouts in three of his 10 big league seasons.

Nationals: Martinez said LHP Sean Doolittle (right knee tendinitis) might throw a simulated game or two before he returns from the injured list. … RHP Austin Voth (right biceps tendinitis) pitched three scoreless innings in a rehab appearance with Double-A Harrisburg on Saturday. He is scheduled to make four or five starts in the minors.

Cubs: Lefty reliever Derek Holland was placed on the 10-day IL with a bruised left wrist. Holland got struck by a comebacker during Wednesday’s 12-11 victory over San Francisco. INF David Bote was recalled from Triple-A Iowa.

Cubs: Following an off day, RHP Yu Darvish (4-6, 4.43 ERA) starts the opener of a three-game series at the New York Mets. Marcus Stroman (7-11, 3.18 ERA) is penciled in for New York, but the right-hander has been dealing with left hamstring tightness.