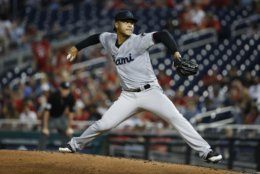 WASHINGTON (AP) — Anthony Rendon helped the Washington Nationals win the kind of game they tended to lose earlier in the season.

Rendon lined a two-run single with one out in the ninth inning and the Nationals rallied past the Miami Marlins 7-6 on Friday night for their seventh victory in eight games.

Rendon had three hits to raise his average to .333 and drove in three runs, giving him 107 RBIs for the NL wild-card leaders.

“He does what he’s been doing all year. He’s been phenomenal,” manager Dave Martinez said. “To me, he’s a candidate for the MVP. He really is. He’s carried us in the big moments all year long.”

The Marlins set a franchise record with their 13th straight road loss.

Howie Kendrick led off with a single against Ryne Stanek (0-3, 0-2 for the Marlins) and Trea Turner followed with a walk. After Gerardo Parra popped out on a bunt, the runners advanced on a passed ball. Rendon then singled to left, with Turner sliding in ahead of the throw.

“I think in a situation like that, you just try not to outdo yourself,” Rendon said. “Not try to hit a home run right there. Same (thing) I’ve been trying to do for the past six years. Try to stay inside the ball and get the barrel on it.”

After Starlin Castro hit a two-run homer off Daniel Hudson (8-3, 2-0 with Washington) in the top of the ninth for a 6-5 lead, the Nationals bounced back to win on a night when they blew a save and committed several miscues in the field.

Harold Ramirez homered and had two singles for the Marlins.

“It was one of those games, honestly, all night long I felt we were going to win,” Marlins manager Don Mattingly said. “For some reason I had that feeling all night long, even with Rendon up there in that situation.”

Juan Soto’s two-out double in the seventh inning gave Washington a 5-4 lead. The Marlins had tied it with two runs in the top half on an RBI single by Castro and a bases-loaded walk by Isan Diaz.

Miami’s Elieser Hernandez gave up four runs on six hits over six innings. He retired 12 straight during one stretch.

The Nationals reinstated left-hander Roenis Elías (right hamstring strain) from the 10-day injured list and right-handed reliever Hunter Strickland from the paternity list. They optioned catcher Spencer Kieboom to Double-A Harrisburg and designated left-handed reliever Matt Grace for assignment. Grace, the Nationals’ eighth-round pick in the 2010 draft, went 5-4 with two saves and a 4.29 ERA in 178 career games for Washington. This season, he was 1-2 with a 6.36 ERA in 51 games.

Marlins: SS Miguel Rojas (right hamstring strain) was 1 for 3 on Thursday in a rehabilitation game for Triple-A New Orleans. Rojas is hitting .278 (5 for 18) in five rehab games over two minor league levels and could be activated when rosters expand Sunday. … OF/SS J.T. Riddle halted his rehabilitation assignment after experiencing right forearm soreness. Riddle has missed 41 games since going on the injured list July 18.

Nationals: CF Victor Robles took pitch off his right index finger while attempting to bunt. He stayed in the game and X-rays after the game were negative. … Closer Sean Doolittle (right knee tendinitis) pitched a 1-2-3 sixth inning in a rehab appearance for Class A Potomac. … RF Adam Eaton, who was hit below the right knee by a pitch on Wednesday, was kept out of the starting lineup but walked as a pinch-hitter in the seventh. … Martinez said 1B Ryan Zimmerman (plantar fasciitis) is with the team and could be activated on Sunday.

Marlins: RHP Pablo Lopez (5-6, 4.41 ERA), who gave up four runs in five innings Monday against the Cincinnati Reds in his first start since missing more than two months, gets the nod as the three-game series continues.