LOS ANGELES (AP) — Kenley Jansen escaped a bases-loaded jam in a bizarre ninth inning that saw both managers on the field trying to figure out what happened, and the Los Angeles Dodgers held off the New York Yankees 2-1 Saturday.

Jansen struck out Mike Tauchman and pinch-hitter Gary Sánchez to end a matchup between the teams with the best records in baseball.

But it was the play right before that to load the bases that left most everyone in the ballpark wondering what was going on.

There were runners at first and second with one out when Gio Urshela hit a grounder to third baseman Justin Turner, who looked to start a game-ending double play. Second baseman Max Muncy caught Turner’s flip but then got wiped out by Brett Gardner’s hard slide for an apparent forceout.

Gleyber Torres, who started the play on second, rounded third and then headed home with Muncy down on the ground, trying to score the tying run. Instead, Torres was stopped by the umpires because time had been called. The strange sequence set off a 2-minute replay review. Gardner was called safe at second, beating the throw with a hard but legal slide.

Justin Turner hit a two-run homer in the third for the Dodgers. Jansen earned his 27th save.

Aaron Judge homered for the second straight day, connecting in the fourth.

Tony Gonsolin (2-1) allowed one run, struck out two and walked two. Joe Kelly and Pedro Baez kept the Yankees scoreless over the sixth, seventh and eighth innings, stranding three baserunners. Baez struck out the side in the eighth.

CC Sabathia (5-8) gave up two runs and five hits in four innings, tying his second shortest outing of the season. He struck out seven and walked one.

Washington has won four straight and six of seven to extend its lead over Chicago for the top NL wild-card spot to three games.

Chicago first baseman Anthony Rizzo exited in the fifth inning with tightness in his middle back — he missed time in May with back trouble.

Turner got Washington off to a quick start, going 2 for 3 with two walks and a stolen base to extend his streak of reaching base safely to 31 games, the longest current streak in the majors. Anthony Rendon stretched his hitting streak to 11 games and drove in a run.

Washington starter Joe Ross allowed two runs on six hits in 4 1/3 innings. Five Nationals relievers combined to hold Chicago to one hit over the final 4 2/3 innings. Wander Suero (4-7) got the final two outs of the fifth to get the win.

Jose Quintana (11-8) allowed four earned runs in four innings and had his career-high streak of seven straight wins snapped. Nicholas Castellanos had two hits and an RBI for the Cubs.

The Red Sox blew a 4-0 lead before Holt put them ahead again by hitting his third homer of the season to open the ninth. The ball sailed over right fielder Hunter Renfroe and into the Home Run Deck. Yates dropped to 0-4.

Matt Barnes (4-4) pitched the eighth for the win and Brandon Workman pitched the ninth for his eighth save.

Eric Hosmer had a two-run homer for San Diego in the third inning.

Boston took a 4-0 lead against Dinelson Lamet after four innings but the Padres chased Red Sox starter Nathan Eovaldi during the three-run fourth and tied it in the seventh against two relievers.

John Means (9-9) allowed one run and five hits over seven innings. He struck out seven and walked none.

Michael Brosseau homered for the Rays.

After hitting into a double play with the bases loaded in the first inning, Severino got a second chance with the bases filled in the third and sent an 0-1 pitch from Austin Pruitt into the left-field seats. In the fourth, Alberto hit a solo shot off Pruitt and Villar connected on the following pitch for a 7-0 lead.

José Alvarado (1-6) made his first major league start for Tampa Bay and lasted for only 24 pitches.

After Colin Moran gave Pittsburgh a 7-0 lead with a pinch-hit grand slam in the sixth inning, Bell lined a fastball from Kevin Gausman into the left-field bleachers in the seventh to reach 102 RBIs.

Bell’s career-high 32 home runs matched Bobby Bonilla’s mark from 1990 for the most by a Pirates switch-hitter.

Moran’s grand slam was his fourth in the majors.

Yamamoto (4-5) allowed six runs, six hits, walked four and struck out three. After winning his first four major league decisions, Yamamoto is winless since July 16 with an ERA of 8.18 in his last seven outings.

Reyes’ 30th homer of the season highlighted a four-run third inning against the Royals’ Glenn Sparkman (3-9).

With the win, Cleveland moved ahead of Tampa Bay into one of the two AL wild-card spots.

Ramirez, a two-time All-Star, left the game in the first inning after fouling off a pitch. He immediately bent over in pain before walking off the field with a trainer. A team spokesman said he exited with “right wrist discomfort.”

Mike Clevinger (9-2) struck out eight and allowed one run over 5 2/3 innings, remaining unbeaten in his career against Kansas City and improving to 4-0 at home this season. Brad Hand worked a scoreless ninth for his 31st save.

The AL-West leading Astros tied the New York Yankees for the best record in the AL at 84-47. The Angels lost their fourth in a row.

Miley (13-4) yielded one run on five hits with four strikeouts over five innings. Will Harris pitched the ninth for his first save of the season.

Luis Rengifo hit a solo home run in the Angels fifth. Mike Trout cut the lead to 5-2 with an RBI single in the seventh.

Allard (2-0) allowed six hits, struck out eight and walked none in his fourth start since he was acquired in a trade with Atlanta last month.

Calhoun and Nick Solak had two hits apiece for the Rangers, who had dropped seven of 10.

Jose Abreu had two of Chicago’s eight hits, giving him 1,001 for his career

Brandon Crawford homered in the fifth and hit an RBI single in the eighth, when San Francisco tied it on a wild pitch by A.J. Puk, before Pillar’s double to right. Evan Longoria had RBI singles in the sixth and eighth off loser Yusmeiro Petit (3-3).

Marcus Semien and Matt Olson had RBI singles in the seventh for the A’s, whose bullpen couldn’t hold the lead.

Mark Canha homered and Matt Chapman added an RBI double for Oakland, which had its four-game winning streak snapped.

Felix Hernandez struck out four over 5 2/3 innings and allowed just three hits in his first appearance since May 11. However, Toronto took advantage of Seattle’s bullpen and rallied with a four-run seventh inning to snap a six-game losing streak.

Billy McKinney, Bichette, Vladimir Guerrero Jr. and Rowdy Tellez drove in runs in the inning as the Blue Jays batted around.

Brock Stewart (3-0) earned the win in his return from the 60-day injured list. He gave up seven hits and three runs, while striking out four.

Hudson (13-6) extended his consecutive scoreless innings streak to a career-high 18 2/3 as the Cardinals won their third straight and sixth in their last seven games.

The Cardinals moved 1 1/2 games ahead of the Cubs for first place in the NL Central.

Hudson struck out two and walked three before being lifted for a pinch hitter after throwing 95 pitches. Tyler Webb, Giovanny Gallegos and Dominic Leone completed the four-hit shutout.

Paul Goldschmidt’s 29th home run of the season capped the scoring in the seventh.

With the win, Milwaukee pulled within two games of Chicago in the race for the second NL wild-card spot. Arizona dropped 5½ games back of the Cubs, who lost to the Nationals earlier in the day.

Arizona had just four hits, three of which came against Anderson.

Thames put the Brewers on the board in the fourth with a solo home run to right field off right-hander Zac Gallen. Grisham followed with a solo shot of his own two pitches later.

Gallen (2-4) struck out eight, but failed to get enough run support and dropped the second of his last three decisions.

Ronald Acuña Jr. hit a tiebreaking single in the eighth, and Billy Hamilton dashed home with another run on the play thanks to a mental lapse by the Mets.

Wilson Ramos extended his hitting streak to 18 games for the Mets, the longest active streak in the majors.

Sano and Cave homered twice Friday night in a 9-6 loss to the Tigers, who have the worst record in the league. The Twins trailed 4-1 in this game before their comeback.

Cave led off the fifth with a double, Kepler doubled home a run and Nelson Cruz hit an RBI single. Sano pulled his 26th homer into the second deck in left off Edwin Jackson (3-7).

Cave hit a two-run homer in the sixth off Matt Hall. Kepler had three hits, including his 35th home run and sixth leadoff shot of the season.

Kyle Gibson (12-6) struck out eight in 5 1/3 innings while charged with five runs, four earned. He won for the first time since Aug. 3. Taylor Rogers secured the final five outs for his 20th save. 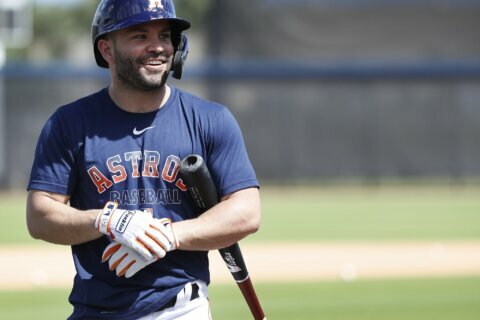