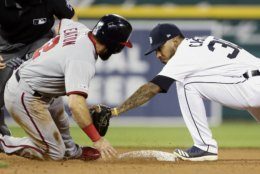 DETROIT (AP) — The Detroit Tigers are celebrating the 35th anniversary of their 1984 World Series team this weekend.

Thanks to the Washington Nationals, the Tigers were also provided with memories of their two most recent World Series clubs.

Anibal Sanchez, a member of Detroit’s 2012 World Series team, beat his former team for his third win in four starts, Juan Soto hit his 14th home run of the season and the Nationals defeated the Tigers 3-1 on Friday night.

Sanchez got the start for Detroit in Game 3 of the 2012 World Series against the San Francisco Giants and said coming back to a place where he enjoyed success was an emotional day.

“It definitely is a place that I haven’t been for a while,” Sanchez said. “You see the uniform but they are the enemy, this team. In the end, it’s another team that you have to face.”

“When he keeps the ball down, he’s really, really good,” Nationals manager Dave Martinez said. “His pitch count was a little up but he was adamant that he could go out and go finish the sixth inning.

Fernando Rodney, the closer for Detroit’s 2006 World Series club, pitched the ninth and recorded his first save of the season. Recalled from Triple-A Fresno on June 25, Rodney, 42, is 18th on the career saves list with 326.

“Baseball for me is opportunity,” Rodney said. “Some people think I’m too old for the league.”

Soto opened the scoring in the second inning with a 418-foot solo homer into the right-field seats.

“It’s really fun when you hit homers like that,” Soto said. “You want to see where the ball is going to land.”

Daniel Norris (2-7), who took the loss, said the pitch to Soto was a mistake.

“I slipped and threw it right down the middle and he hit it out of the stadium,” Norris said.

Nick Castellanos accounted for Detroit’s run in the bottom of the fifth with his eighth homer of the season, a 436-foot drive to center. Castellanos has hit safely in 30 of his last 34 games.

Norris left the game after five innings due to cramping in the groin in the area where he underwent surgery early last season.

“After the fifth, they told me I was done,” Norris said. “I wanted to stay in, and I felt like I could’ve navigated through it.”

The Tigers have lost eight in a row. Detroit scored one run for the third straight game. The Tigers are last in the major leagues with 266 runs scored.

Nationals: The Nationals reinstated 1B Ryan Zimmerman from the 10-Day Injured List. Zimmerman missed 53 games with plantar fasciitis in his right foot.

Nationals: RHP Austin Voth (0-0) goes Saturday in the second game of this series.

Tigers: Lefty Gregory Soto (0-2) was recalled from Triple-A after Friday’s game and will start. 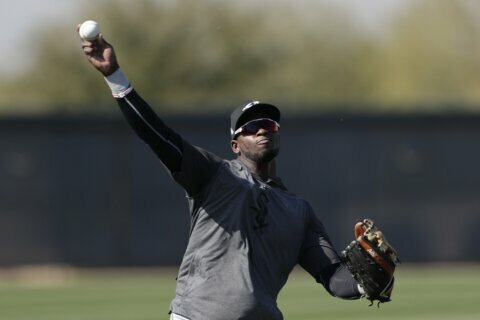