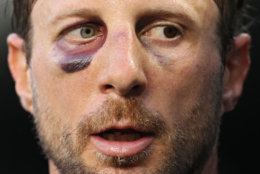 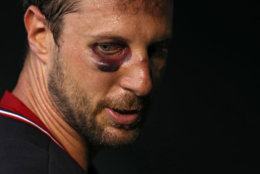 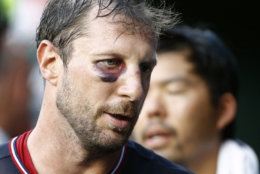 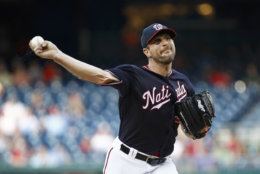 Scherzer himself? He shrugged off his work in the Nationals’ 2-0 victory Wednesday night as business as usual.

“Trust me, this thing looks a lot worse than it actually is,” Scherzer said. “I felt zero pain. There’s been plenty of other injuries where I felt a lot of pain and I’ve had to pitch through. I’ll hang my hat on those starts, but tonight I felt zero pain. This is part of what you have to do. You take the ball every fifth time.

“That’s my responsibility to the team, to make sure I always post, and I knew I could post tonight.”

Brian Dozier and Victor Robles hit solo homers to support Scherzer (6-5) as Washington won for the 16th time in 23 games. Philadelphia has dropped seven of its last nine and 12 of 18.

In the first game, Patrick Corbin struck out eight while allowing one run over seven innings as the Nationals earned a 6-2 victory in the delayed series opener after the teams were rained out Monday and Tuesday.

Scherzer bunted a ball off his face during batting practice Tuesday, but it didn’t stop him from making his scheduled start. His injury may have provided an extra layer of intimidation in the form of a black eye more worthy of a boxing ring than a baseball diamond.

The three-time Cy Young Award winner sported a pronounced bruise arcing beneath his right eye, adding another hue to a glare that already featured one blue eye and one brown eye.

“Going out there and throwing, the only thing I had to deal with was the swelling underneath the eye,” Scherzer said. “It was kind of jiggling around, and so in warmups I just had to get used to knowing what it was feeling like to throw the ball and just have that swelling.”

While he wasn’t at his most efficient on a humid night, piling up 117 pitches, Scherzer was rarely threatened. He struck out 10, yielded only four hits and permitted just two runners to reach scoring position. And he finished strong, striking out three in a row after Cesar Hernandez led off the seventh with a double.

“It really is one of the most impressive things I’ve seen in a while,” Dozier said. “He’s probably the best pitcher in our generation, and you don’t get that status unless you take the ball every fifth day, no matter if you’re doing good, doing bad, you got a broken nose. You always want the ball.”

Bryce Harper, Scherzer’s former Nationals teammate, was 0 for 4 with four walks in the doubleheader and was loudly booed before each plate appearance — especially in the better-attended nightcap. This series is his second trip back to Washington, where he played from 2012-18, since signing a 13-year, $330 million contract with Philadelphia in March.

Dozier belted a two-out solo shot in the second off Jake Arrieta (6-6), who allowed two hits and struck out three over six innings and had the misfortune of matching up with Scherzer on the wrong day.

“Max is just one of the best to ever toe the rubber, honestly,” Arietta said. “We have ran into him a couple of times. That’s just what he does. He is tough to square up, and he is throwing three or four pitches for strikes with electric stuff. Just a tough one.”

Robles homered off reliever Pat Neshek in the eighth. Neshek departed two batters later with a left hamstring strain, and manager Gabe Kapler said he was likely to land on the injured list less than a week after returning from an absence of more than three weeks caused by a shoulder strain.

Wander Suero pitched a perfect eighth for Washington, and Sean Doolittle worked the ninth for his 15th save in 18 tries.

Philadelphia was 0 for 12 with runners in scoring position between the two games.

Corbin (6-5), whose start was pushed back twice this week, allowed a solo homer to Scott Kingery in the first inning of the opener. But he let just one other runner to reach third while ending a personal three-game skid.

“It’s not ideal, but you have to deal with it to make sure you are ready,” said Corbin, who is one strikeout shy of 1,000 for his career. “I was glad we got that one in today.”

Dozier and Gerardo Parra had RBI doubles against Phillies starter Zach Eflin (6-7). They later hit back-to-back homers in the eighth inning off Cole Irvin to seal the victory.

Phillies: C J.T. Realmuto (groin) started the opening game and went 0 for 4, the struck out as a pinch hitter in the second contest in his first action since Saturday. … OF Jay Bruce (left hamstring), who had not played since Saturday, started the second game in left and was 1 for 4. … LHP Adam Morgan (forearm strain) pitched a scoreless inning in a rehabilitation appearance Wednesday for Double-A Reading.

Nationals: C Kurt Suzuki, who left Sunday’s game with a neck injury, started the second game and went 0 for 3.

Parra debuted an eyebrow-raising walk-up music selection: “Baby Shark,” a popular children’s song. Parra was in an 0-for-22 slump entering the day, but was 2 for 4 in the opener.

“I wanted to put in something different,” Parra said. “My (2-year-old) daughter knows that song. … I said, ‘You know what, I am going to put in ‘Baby Shark.'”

Philadelphia recalled LHP Ranger Suarez from Triple-A Lehigh Valley as its 26th man for the doubleheader. Suarez allowed four earned runs in four innings on June 10 in his only other appearance for the Phillies this season. … Washington summoned RHP Austin Voth from Triple-A Fresno. Voth, who is 3-5 with a 4.99 ERA this season, pitched in four games for the Nationals last season.