MIAMI (AP) — Stephen Strasburg walked off the field after a 1-2-3 eighth inning, and when his manager and teammates lined up in the dugout to punctuate his performance with a round of handshakes, he ignored them and made a beeline down the steps toward the clubhouse tunnel.

Strasburg wanted to keep pitching against the Miami Marlins. And who can blame him?

The right-hander dominated his favorite foil Sunday, striking out 11 and allowing two hits to help the Washington Nationals avert a series sweep with a 5-0 victory.

Manager Dave Martinez decided eight innings and 104 pitches were enough for Strasburg, and followed him into the tunnel to tell him so.

“He wanted to go back out,” Martinez said with a chuckle. “I went down there with him and said, ‘Great job.’ He said, ‘OK.'”

Said the taciturn Strasburg: “I’m going to go as long as I can until he takes the ball out of my hands. It’s that simple.”

Strasburg (2-1) improved to 18-7 in 32 career starts versus the Marlins. He has won his past nine decisions against them, and has more victories over Miami than against any other team.

With his longest outing this season, Strasburg reached double digits in strikeouts for the 41st time, and the first time this year, while lowering his ERA from 5.56 to 4.11.

He helped the Nationals bounce back after losing the first two games of the series against a team with the worst record in the majors.

“He was really, really good,” Martinez said. “An unbelievable pick-me-up.”

The retractable roof was open at Marlins Park, a rarity for a day game, and Zimmerman said the mix of sun and shadows in the infield made hitting a challenge.

“It’s awful,” he said. “I don’t understand why you would play a game like that if you don’t have to. … Close the roof.”

The Marlins were shut out for the sixth time, and manager Don Mattingly blamed Strasburg rather than the shadows.

“He got his breaking ball over all day long,” Mattingly said. “I thought he had pretty much everything working.”

Miami loaded the bases in the ninth thanks to two walks and an infield single before Sean Doolittle retired Miguel Rojas to complete a three-hitter.

Washington won without slugger Anthony Rendon, who sat out after being hit by a pitch on the left elbow Saturday.

Trevor Richards (0-3) allowed three runs in 6 1/3 innings and was a bit unlucky. Homers by Zimmermanand Dozier were pulled down the left field line and barely cleared the fence.

Zimmerman’s second homer in the ninth also had just enough distance, giving him 999 career RBIs. The homers were his second and third this year, and his average rose to .203.

The Marlins (6-16) came up short in a bid for their first series sweep since September 2017.

“Everyone says, ‘This team is going to lose this many games,'” Zimmerman said. “But they’re a big league team with some talented young kids. You have to go there and play good baseball, or they’re going to beat you. I hate when people say that about big league teams.”

Rendon’s elbow was heavily taped, but Martinez said he is optimistic his third baseman won’t need to go on the injured list. An X-ray revealed no fracture. … Nationals RHP Max Scherzer was checked by the trainer after dodging a foul ball in the dugout, and Martinez said his ace appeared to be fine.

Less than 24 hours after beating Scherzer , the Marlins were back in their old rut offensively.

Lewis Brinson went 0 for 3, dropping his average to .179. He is in a 1-for-27 slump with 16 strikeouts, leaving him in danger of a demotion to the minors.

Curtis Granderson struck out swinging four times, and his average fell to .155.

Nationals: RHP Jeremy Hellickson (2-0, 2.63) is scheduled to pitch to start a three-game series Monday at Colorado. 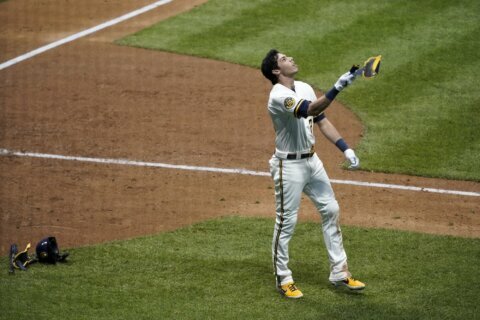 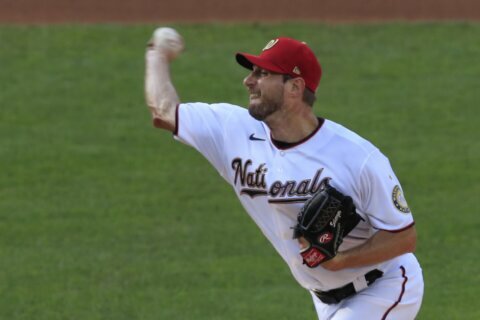