Howie Kendrick put Washington on top with a two-run single in the first, but Colorado evened it in its half of the inning on Arenado's RBI double and Ryan McMahon's RBI single.
Listen now to WTOP News WTOP.com | Alexa | Google Home | WTOP App | 103.5 FM
(1/5) Arenado hit a tiebreaking homer for his 1,000th career hit and the Colorado Rockies rallied to beat the Washington Nationals 7-5 Monday night.

Arenado also doubled twice and drove in two to help the Rockies win for the seventh time in eight games. He is the ninth Rockies player to reach 1,000 hits, getting there with a solo shot off Wander Suero (1-2) in the seventh to make it 6-5.

“I’m just thankful I was able to put the team ahead there and have a good quality at bat against a guy throwing hard and throwing really good cutters,” Arenado said. “I just tried to hit the ball hard there.”

Washington manager Dave Martinez said Suero’s pitch to Arenado went over the middle of the plate.

The Rockies located the home run ball, convincing the fan who caught it to give it up in exchange for balls autographed by Trevor Story and Charlie Blackmon. Clubhouse manager Mike Pontarelli put the ball in a case and presented it to Arenado after the game.

“This is real cool,” Arenado said with a smile.

Mark Reynolds and pinch-hitter Raimel Tapia also homered for Colorado, and Trevor Story singled twice and drove in a run to extend his hitting streak to 11 games.

Brian Dozier had a three-run home run for the Nationals, who could not hold two- and three-run leads.

Tapia connected off Kyle Barraclough in the Rockies’ eighth.

Wade Davis got three outs for his second save, capping a strong showing by Rockies relievers, who picked up faltering starter Tyler Anderson by not allowing a run over six innings. Chad Bettis stabilized the game for the Rockies by working three innings and Seunghwan Oh (1-0) worked a hitless seventh.

“Those guys have been doing a great job for us all year,” Reynolds said. “Bettis came in and threw three innings, really good work, then Oh and (Scott) Oberg and Wade. They haven’t had too many leads to pitch with this year, but when they do have the lead, they tend to hold it and keep us in games. And to fall behind twice and win this game against a really good team, it’s a confidence boost.”

“We knew coming in they had a pretty decent bullpen,” Gomes said. “It was just a matter for us to put some good at-bats together. We did, we were just one knock away from away from breaking the game open, just like they were. We took some good approaches, it just didn’t go our way.”

Arenado helped defensively in the ninth, snaring pinch-hitter Kurt Suzuki’s sharply hit grounder to third, stepping on the bag for the force before going to first to complete a game-ending double play.

Colorado evened the score for the second time with a three-run fifth, highlighted by Reynolds’ two-run homer off Jeremy Hellickson, who allowed a season high five runs on nine hits in five innings.

With the score tied at 2 and runners at first and second following successive walks in the fourth, Dozier drove a 2-0 offering deep into the left field bleachers to put Washington up 5-2 and chase Anderson, who was reinstated earlier in the day from the 10-day injured list (left knee inflammation). Anderson allowed five runs and four hits in three-plus innings in his shortest outing of the season.

Howie Kendrick put Washington on top with a two-run single in the first, but Colorado evened it in its half of the inning on Arenado’s RBI double and Ryan McMahon’s RBI single.

Rockies: LHP Kyle Freeland will miss his scheduled start Tuesday night after going on the 10-day injured list because of a blister on his left middle finger. The move was retroactive to Friday. … INF Daniel Murphy is nearing a return from the 10-day injured list, which he has been on since April 1 after fracturing his left index finger diving for a ground ball. Murphy has gone 2 for 13 with a double and three walks in three rehab games at Triple-A Albuquerque.

INF Jake Noll has been recalled from Triple-A Fresno, and the team optioned RHP Austin Adams to Fresno.

Nationals: LHP Patrick Corbin (1-0, 2.36 ERA) is set to make his 22nd career start against the Rockies on Tuesday night. He has eight wins against them.

Rockies: No announcement had been made regarding a Tuesday night replacement for Freeland. 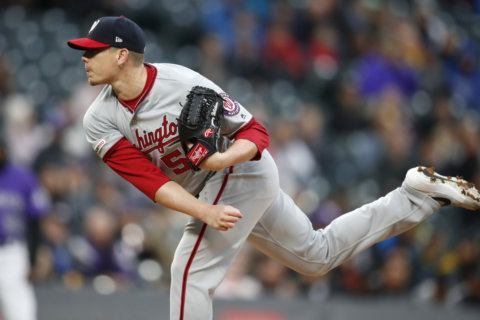