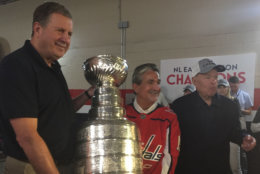 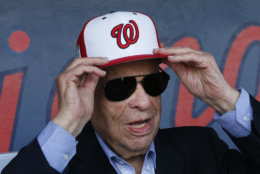 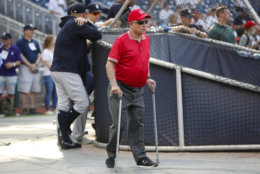 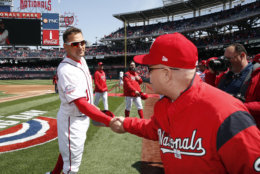 WASHINGTON — Ted Lerner, 92, has stepped down as managing principal owner of the Washington Nationals, and his son Mark will now take over.

Major League Baseball formally approved Mark Lerner, 64, as the team’s “control person” during its quarterly ownership meeting in New York City Thursday, the Nationals said in a news release. Mark Lerner has been a principal owner since the Lerner family bought the baseball team.

“Owning a baseball team in my hometown had long been a dream of mine,” said Ted Lerner, in the release.  “Twelve years ago, when Major League Baseball selected my family as the owners of the Washington Nationals, I could not have been happier.”

The 92-year-old Lerner was born in Washington, D.C. and is a current resident of Chevy Chase, Maryland. He founded the real estate company Lerner Enterprises in 1952. The company has developed more than 20 million square feet of real estate. His son, Mark, has been active in running the ball club with his father and family.

“Since being awarded the team in 2006, my family has taken great pride in our fans and this team,” Mark Lerner said. “We have always strived for excellence both on and off the field. That will not change. Our family will continue to put our fans first and do everything possible to bring a World Series trophy to D.C.”

Mark Lerner took time away from the day-to-day business of the club last year while he received treatments for cancer in his left leg. His leg had to be amputated after Spindle Cell Sarcoma was discovered above his knee. He had radiation in March 2017 and cancer surgery a month later.

The younger Lerner last August said that he was healing well and cancer-free.