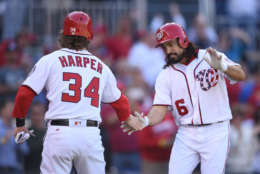 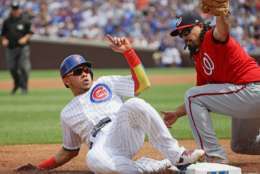 WEST PALM BEACH, Fla. —  Anthony Rendon is as solid an all-around baseball player as there is. And turning 28 this year, he is just entering his prime.

Some players may hit for more power than Rendon. However, not too many will hit for a better average or reach base at a higher clip, and it will be even harder to find a better fielder. He is in an elite class.

If you can’t recall him making an error, it’s because he rarely did — committing just seven while playing nearly 1,300 innings at third base.

He takes an easygoing approach to the plate.

But in the rare time that his swing needs tweaking?

“I definitely look at video to see if I’m leaking. Why complicate it?”

He doesn’t have to.

“Rendon is a magician,” Long said. “He is fun to watch. When he came up to bat, I sat there and marveled at him. He is quiet. His mechanics are flawless. It looks effortless.

“He is in line. He is balanced. He just does a lot of things right.”

What does Rendon attribute to his career year?

“I think I tried to drive the ball more,” he said. “I wouldn’t necessarily say I tried a Daniel Murphy launch angle, but I did try to hit it at a certain degree.”

Rendon has made an even bigger change heading into the new year: He got married in the offseason, then cut his long hair.

Rendon jokingly added that maybe the new look will garner his first All-Star selection. He just missed the team last year. What will it take in 2018?

“I’m thinking with my new haircut, I’m a professional now. I’m trying to show people to take me more seriously, so maybe I’ll get more All-Star votes. That’s just my own reasoning,” he said.

Sounds reasonable enough. He has done everything else to warrant selection.

Nats Notes: Pitchers are usually ahead of hitters early in Spring Training, and that was the case when Max Scherzer and Stephen Strasburg took the mound in batting practice. They kept the batters at bay, including must-see battles with Bryce Harper.

After he passed his physical, the Nationals officially announced the signing of reliever Joaquin Benoit. He said it’s nice to be on a team with a chance to go to the playoffs and contribute. After just two days on the field in West Palm Beach, Benoit seems to have made an immediate connection with a lot of players.