The WNBA playoff race is still very much undecided with just two weeks left in the regular season.

Five teams have clinched postseason berths with only three games separating Chicago, Las Vegas and Connecticut at the top of the standings. Seattle and Washington also have earned berths in the postseason and are tied for fourth and fifth spots.

Under the new playoff format those two teams, right now would meet in a first-round, best-of-three series. The first two games of each first-round series will be played on the higher seeds court. If a third game is necessary, it will take place at the lower seed.

There are still six teams vying for the final three spots, setting up an exciting finish to the regular season. Each of the six teams has at least one game remaining against the others in this group.

Los Angeles is currently holding onto the final playoff spot.

“It’s exciting for all the teams involved, especially ourselves. Got to play it one possession at a time. For us, if we can pull two of the next three out we’ll be in a good spot,” Sparks interim coach Fred Williams said. “When taking over this team, wanted to keep us in position towards the end of the season to have the last five or six games where we have a playoff opportunity.”

Minnesota has been playing the best of the teams battling for the final postseason berths, winning two pivotal road games last week. The Lynx moved up four spots to seventh in the AP WNBA power poll this week.

1. Chicago (23-7): The Sky got Courtney Vandersloot back in the lineup but lost Candace Parker to a non-COVID illness. They have a four-game homestand before finishing the season on the road, including a matchup against the team chasing them — Las Vegas.

2. Las Vegas (22-8): The Aces have three games left — all on the road. The trip will crisscross the country with games in Washington, Dallas and Seattle.

3. Connecticut (20-10): The Sun have two losses since the All-Star break, those setbacks were against Las Vegas and Chicago. They have two games this week: home against Phoenix and at Chicago.

4. Seattle (19-12): The Storm return home after a three-game eastern trip that saw them earn the tiebreaker against the Mystics if the teams finish the regular season with the same record.

5. Washington (19-12): Elena Delle Donne played in back-to-back games for the Mystics over the weekend. It was a great sign going forward for coach Mike Thibault’s squad. She has been taking games off during the season to rest her back that caused her to miss most of the last two seasons.

6. Dallas (13-16): Teaira McCowan has been a force the last couple of games, going 15-for-22 from the field and averaging 20.5 points and 12.5 rebounds. She needs to maintain that momentum with pivotal games against Chicago and Las Vegas this week.

7. Minnesota (12-19): Road wins at Atlanta and Los Angeles last week kept alive the Lynx’s playoff hopes. They had dropped four of five before those victories.

8. Phoenix (13-17): Sophie Cunningham has been a solid third scoring option for the Mercury to complement Diana Taurasi and Skylar Diggins-Smith.

9. New York (11-18): The Liberty have all seven games left against the teams they are chasing for the final playoff spots.

10. Atlanta (12-18): The Dream have lost four straight and have two more games at home this week to try and end the skid and stay in the playoff hunt. Atlanta lost AD Durr for the season because of a hip injury that will require surgery.

11. Los Angeles (12-17): A four-game eastern trip will go a long way to determining whether the Sparks are a playoff contender or not.

12. Indiana (5-27): The Fever have a 14-game losing streak and guard Kelsey Mitchell is done for the season with a plantar fascia tear in her left foot.

Courtney Vandersloot of Chicago was voted the AP Player of the Week. She averaged 19.5 points, 10.5 assists and 7 rebounds to help the Sky win both of their games. Elena Delle Donne of Washington, Kahleah Copper of Chicago, Sylvia Fowles of Minnesota and Kelsey Plum of Las Vegas also received votes.

Las Vegas at Seattle, Sunday. Sue Bird’s final home game in the regular season will have potential playoff positioning ramifications as the Storm are currently fourth, tied with Washington. The Aces trail Chicago by one game for the league’s best record. 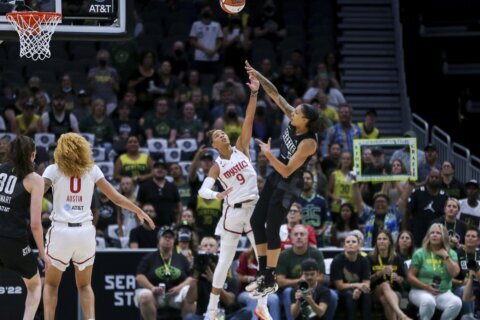 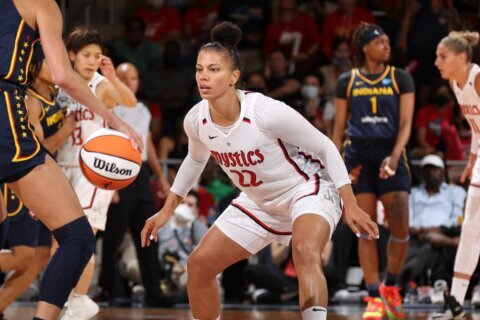