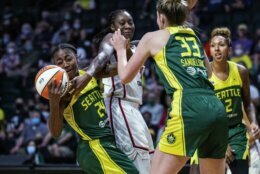 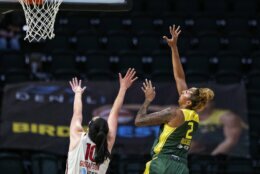 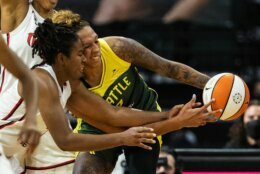 The Storm (20-10) moved into third place in the playoff race with two games to play. Seattle raced out to a 10-point lead in the first quarter, hitting eight 3-pointers. Bird made all four of her attempts from behind the arc in the quarter.

Seattle kept it going and Katie Lou Samuelson was fouled as she hit a 3 in transition and converted the 4-point play to give Seattle a 67-45 lead with 6:28 left in the third quarter. Moments later Breanna Stewart gingerly walked to the locker room and did not return to action.

The Storm played swarming defense throughout, regularly trapping Tina Charles — who went into the game averaging a WNBA-leading 24.8 points per game. Charles finished with four points on 1-of-6 shooting with three turnovers.

Shavonte Zellous hit four 3-pointers and finished with 17 points for Washington (10-18), which fell a half-game behind New York for the final playoff spot.