BRADENTON, Fla. (AP) — Breanna Stewart had 18 points, eight rebounds and four steals in her first WNBA game since helping Seattle win the 2018 championship, sending the Storm past the New York Liberty 87-71 Saturday in the season opener for both teams.

The 2020 WNBA season, delayed and shortened by the coronavirus pandemic, will be played in a bubble at the IMG Academy.

Stewart missed all of last season after tearing her Achilles tendon while playing for her Russian club team in April 2019.

Jewell Loyd scored 14 points and Sue Bird — who also missed the 2019, because of a knee injury — added 11 points, hitting 3 of 5 from 3-point range, and five assists for Seattle.

Sabrina Ionescu had 12 points, six rebounds and four assists in her WNBA debut. Ionescu, the No. 1 pick in April’s draft , was 4-of-17 shooting, including 0 of 8 from 3-point range, and committed four turnovers.

Oguwmike and Augustus combined to make all 14 of their shots. Augustus was playing her first game with Los Angeles after signing as a free agent from Minnesota in the offseason. Chelsea Gray and Candace Parker had 13 points apiece, and Brittney Sykes and Te’a Cooper each scored 10.

Diana Taurasi, who missed most of last season with back and hamstring injuries, led Phoenix with 16 points, Skylar Diggins-Smith added 14 points and six assists.

Los Angeles outscored the Mercury 30-8 in the third quarter to take an 80-54 lead into the fourth.

Hines-Allen, who came into the game with seven career 3-pointers made, hit 3 of 4 from behind the arc.

The Mystics are missing reigning MVP Elena Delle Donne, who is rehabbing a back injury, and newly acquired center Tina Charles, who was medically excused for the season. Washington is also without Natasha Cloud, who is focusing on social justice causes this season, and LaToya Sanders.

The Mystics didn’t miss a beat against their former assistant coach Marianne Stanley, who took over the Fever this year. She was presented her championship ring before the game by the Mystics.

Aerial Powers and Emma Meesseman had 14 points apiece and Shey Peddy and Ariel Atkins each scored 10 for the Mystics. 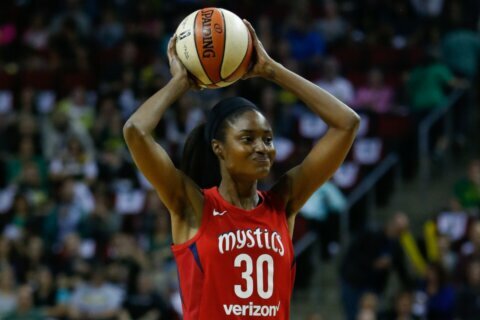