Delle Donne back in Mystics’ starting lineup for Game 3

UNCASVILLE, Conn. (AP) — WNBA MVP Elena Delle Donne was in Washington’s starting lineup for Game 3 of the WNBA Finals on Sunday, five days after leaving the team’s Game 2 loss to Connecticut with back spasms.

The 6-foot-5 Delle Donne, who averaged 19.5 points and 8.2 rebounds in the regular season, is suffering from a herniated disk that is pinching a nerve in her back. She left the 99-87 loss Tuesday without scoring a point after playing just over three minutes in the first quarter.

She averaged 21.4 points and 7.6 rebounds in the Mystics’ first five playoff games.

Delle Donne did not practice this week but was out shooting 3-pointers 2½ hours before tipoff on Sunday.

Mystics guard Ariel Atkins, who suffered back spasms on Thursday night also was listed as a starter on Sunday. 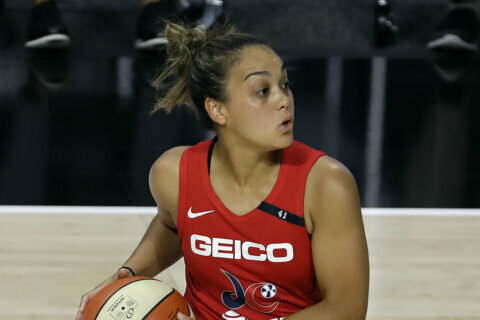 Liberty get first win with 74-66 victory over Mystics