LAS VEGAS (AP) — The Washington Mystics are heading back to the WNBA Finals, and this time they believe they…
Listen now to WTOP News WTOP.com | Alexa | Google Home | WTOP App | 103.5 FM
(1/6) 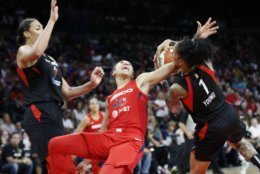 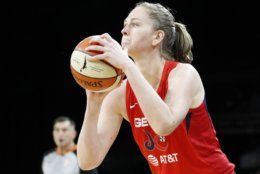 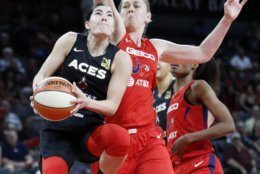 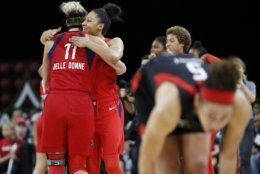 LAS VEGAS (AP) — The Washington Mystics are heading back to the WNBA Finals, and this time they believe they have the depth and versatility to win it all.

Elena Delle Donne scored 25 points, and the Mystics earned a return trip to the championship round, outlasting the Las Vegas Aces 94-90 to close out their semifinal series on Tuesday night with LeBron James sitting courtside.

The Mystics, who eliminated the Aces in four games, will host the Connecticut Sun in Game 1 of the Finals on Sunday. Last season, Washington was swept in three games by the Seattle Storm.

Emma Meesseman bounced back from her six-point performance in Game 3 by scoring 22 for Washington. Kristi Toliver added 20 and Natasha Cloud chipped in with 11.

“Beating a team like that to get to the Finals, we had to earn it,” Washington coach Mike Thibault said. “I thought they had some great performances tonight, and obviously we did, too.”

Thibault said three keys for his team were Meesseman returning to her role as a reserve, LaToya Sanders for “absorbing the beating that she had to take defending someone like Liz (Cambage),” and Delle Donne for defense on A’ja Wilson, who had a career-low four shot attempts.

“That’s what makes a championship team, that’s the makeup, it’s everybody doing their part,” Toliver said. “Everybody knows their role. Not everybody can be a chief, we gotta have Indians, too. And we got a great group of Indians — the best in the league.”

Cambage, who suggested the Mystics needed to “get in the weight room” to deal with her physical play, led the Aces with 25 points and 12 rebounds. WNBA Sixth Woman of the Year Dearica Hamby had 18 points and 11 rebounds while Kelsey Plum scored 17.

But it was the absence of Wilson’s opportunities that hindered the Aces in key moments, including the fourth quarter, when she didn’t attempt a shot.

Las Vegas erased a seven-point deficit and closed the third quarter on a 15-7 run that included five points each from Plum and Hamby and gave the Aces a 68-67 lead.

League MVP Delle Donne and Meesseman took over in the fourth quarter. They scored 21 of Washington’s 26 points in the period to seal the win.

Hamby had a chance to tie the game with 3.4 seconds left but missed a 3-pointer from the corner.

“Our main focus was just to get defensive stops and we know our offense goes from there,” Meesseman said. “That was pretty much the only thing we were saying in the huddles.”

The Mystics held the Aces to 9 of 20 shooting in the fourth quarter. Washington shot 10 of 19 from the field in the fourth, with Delle Donne and Meesseman combining to make 9 of 12.

“When you have to be a big-time player in big-time games, the more times you do it, the better you get,” Thibault said. “I thought we stayed calm down the stretch. We got up seven, they made a great run, came right back at us, gave up a lead twice in the second half and we stuck with it. … To win these kinds of games you gotta have guts and you gotta have emotion, but you’ve also gotta have some calmness when everything is crazy.

“I thought we showed some calmness late in the game.”

Las Vegas built a 10-point lead midway through the second quarter, but the Mystics quickly turned things around. Toliver, Delle Donne, Cloud and Meesseman scored consecutive buckets to ignite a 16-4 run that closed the half and gave the Mystics a 45-43 lead at the break.

Washington carried its momentum into the second half when Toliver opened the quarter with a 3-pointer in front of the Aces bench and went on to score 10 of the Mystics’ first 15 points in the third.

Mystics: It won’t show on the stat sheet, but Aerial Powers gave Washington the support it needed, including a spark just before its second-quarter run. Powers, who finished with seven points and five rebounds in 16 minutes, stood her ground against a driving Hamby and took the charge on the baseline with 5:40 left, with the Aces leading 34-27. The Mystics outscored Las Vegas 18-9 from there.

Aces: Kayla McBride, who averaged 7.5 points over the last six games of the regular season, came in averaging 14.7 on 50% shooting in the playoffs. But she went just 2 of 10 from the floor Tuesday night, including 1 of 5 from 3-point range.

Washington will host Connecticut in Game 1 of the WNBA Finals on Sunday. 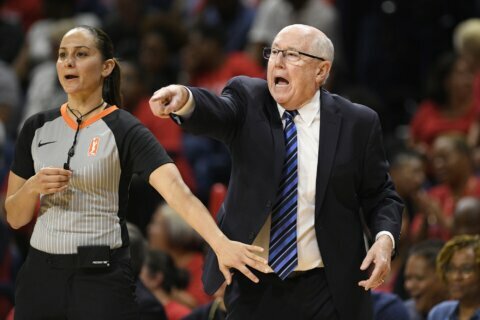 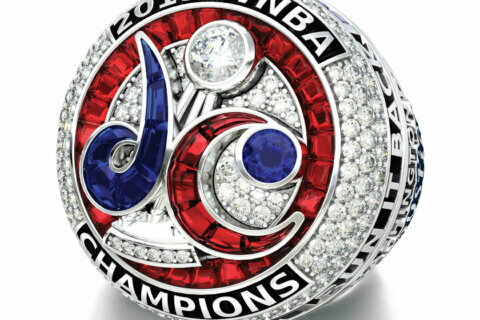