Good and bad news came out of the Washington Football Team’s Week 10 matchup against the defending Super Bowl champion Buccaneers.

The good news: Washington won, giving them at least a fighting chance to salvage their season with a 3-6 record. The bad news: Chase Young suffered a knee injury which is all but certain to end his season.

Young’s setback adds to the already existing injury problem facing Washington’s pass rush. Montez Sweat will be out until around early December after suffering a fractured jaw in the loss to Denver on Halloween.

Washington is facing a personnel issue on their defensive front. The team will look to two men to plug the hole left by Young and Sweat in an attempt to make opposing quarterbacks’ lives a bit more difficult in the remaining weeks of the 2021 season: Casey Toohill and James Smith-Williams. Behind them, Bunmi Rotimi and Shaka Toney—who were previously practice squad members—will provide some depth.

Toohill has already made a bit of an impact this season, notching three tackles against Tampa. He also had two solo tackles and a sack during WFT’s loss to the Chiefs in Week 6.

At just 25 and in his second year in the pros out of Stanford, Toohill is far from refined, and it would be a tall order to expect him to be as impactful as Montez Sweat. However, his athleticism and size (6-5, 254 lbs.) could at least prevent opposing offensive lines from double-teaming Jonathan Allen and Daron Payne every play.

“We watched Casey [Toohill] did some really good things,” Ron Rivera said Monday. “We feel Casey’s athletic enough that we could drop him into coverage a couple of times. You guys saw him break on the ball, help make some big tackles.”

James Smith-Williams was WFT’s seventh-round pick last year and has played 30% of defensive snaps this season. He tallied three tackles, a sack, tackle for a loss and a QB hit against Denver in his best professional appearance thus far. Smith-Williams drew the start against Tampa replacing an injured Sweat.

“I think he’s been solid. I really do,” Rivera said of the NC State alum. “The one thing that you’ve seen from him has been consistency and it’s been a lot of fun to watch him get better and better at things. Same thing with Casey [Toohill]. I think both those guys are in their second season and you see them starting to step up a little bit. It’s been good to watch guys grow and develop.”

Bunmi Rotimi has seen just six snaps this season, all in Washington’s loss to Green Bay. He’s a local guy, having played at both Old Dominion University and West Potomac High School in Alexandria. Rotimi showed his potential during the preseason when he was able to sack Lamar Jackson on a third down in the first quarter.

“Bunmi Rotimi has done a nice job. He’s got some good quickness, some good athleticism. He had a pretty good camp as well. So we’re anxious to watch these guys play.”

Shaka Toney was selected in the seventh round out of Penn State in 2021. He’s confident in his abilities to make an impact this season, as he told The Athletic last week:

“They made the right choice when they chose me,” Toney said. “Speed or playmaking. I got to come off the edge and bring the juice. Being the guy that is gonna come off the bench, provide relief and show there’s no drop-off and just do my job.”

Those four guys—Toohill, Smith-Williams, Rotimi and Toney—will be the players who WFT will look to on the defensive front alongside Jonathan Allen and Daron Payne. Especially with matchups against extremely mobile quarterbacks (Cam Newton, Russell Wilson, Jalen Hurts, to name a few) upcoming, Washington’s edge rushing will be a focal point as they try to make do with what they have. Ron Rivera has already acknowledged that this could be the chance for those four players to make their mark on this team, and potentially set themselves up for future success.

“Our hands are tied a little bit, but we’ll see because these are opportunities,” Rivera said. “And with guys that get opportunities, a lot of times hopefully they’ll step up…it’d be great to have somebody make those plays and be able to, I don’t want to say replace them, but be the next guy up.” 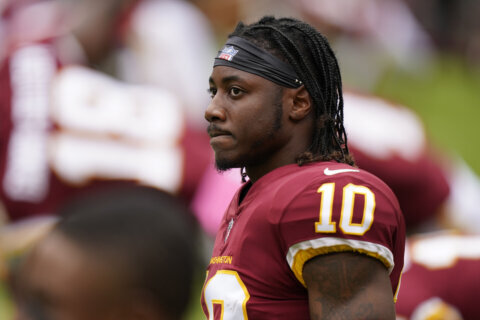