The Washington Football Team's 34-30 come-from-behind win in Atlanta was far from impressive but had the feel of another season-salvaging victory.
Listen now to WTOP News WTOP.com | Alexa | Google Home | WTOP App | 103.5 FM

Why does 2-2 feel much more than just one game better than 1-3? The Washington Football Team’s 34-30 come-from-behind win in Atlanta was far from impressive but had the feel of another season-salvaging victory. Were things pretty? Far from it. As is the case with most 2-2 teams, there was enough Sunday to be excited about, while also enough to make one wonder how the Burgundy & Gold can find their way back into the playoffs.

Taylor Made: Quarterback Taylor Heinicke threw for 290 yards and three touchdowns, including a pair in the final four minutes of regulation. He was the team’s second leading rusher, gaining 43 yards on five tries. After four weeks his passer rating is 105.9, and even in today’s air-friendly NFL that’s pretty impressive.

Shouldering the Load: Antonio Gibson (14 carries for 63 yards and a touchdown) and J.D. McKissic (15 yards on seven carries plus five catches for 44 yards and the game-winning touchdown) are providing a nice 1-2 combo. After four games the running attack (103.3 yards per game) ranks 18th in the NFL, better than last year.

Pass Catch Fever: Terry McLaurin caught six passes for 123 yards and a touchdown, which is what you’ll see when there’s another threat by the name of Curtis Samuel (four catches on four targets). Tight end Lane Thomas is now week-to-week with a hamstring issues, but Ricky Seals-Jones came off the bench to make a pair of receptions.

Third and Middling: The offense moved the chains on 4-of-9 opportunities, with nine pass plays being called. Taylor Heinicke completed 5-of-8 passes (four conversions) while scrambling short of the marker. His top target? Running back J.D. McKissic (two conversions on three catches/targets). Yardage breakdown: 1-3 on short-yardage, 0-2 on four to six yards needed, 3-4 on long-yardage.

D earns one: The much-maligned defense allowed 30 or more points for the second straight week and entered Monday 29th in yards allowed and 30th in points surrendered. Linebacker Cole Holcomb led the team with nine tackles while lineman Jonathan Allen added eight stops. The Falcons converted 10-of-16 third downs. (Washington is now 59.7% compliant to rank 32nd in the NFL) and scored three of their four touchdowns on the money down. But credit the defense for forcing nine third and long (7+ yards needed) situations. So there’s progress … at least until they get exposed for not having linebacker Jon Bostic (pec injury) on the field this fall.

Special Situations: DeAndre Carter’s 101-yard kickoff return for a touchdown was the kind of stuff one was hoping for when he nabbed that role. Carter also had a six-yard punt return. Tress Way averaged 42 yards per punt while Dustin Hopkins kicked a 21-yard field goal. He also missed a pair of extra points and had three of his seven kickoffs returned. But Head Coach Ron Rivera says he’s the team’s kicker.

Flying Flags: Six penalties for 85 yards gives the team 28 for the season (7th most per game). Three came against the defense while two were on the offense and the other was on special teams. Two pass interference and two false starts were called. (DPI is the team leader with six after four weeks). William Jackson III was whistled for his fourth pass interference while Chase Young drew his second roughing-the-passer flag (Young also has a pair of Neutral Zone Infractions). The most costly flag? Young’s roughing call turned what was a failed fourth down attempt (and Washington possession) at their 42 into a 1st & 10 for the Falcons at the 27. They’d score a touchdown four plays later and take a 30-22 lead.

Digesting the Division: Dallas (3-1) owns first place and after four weeks owns the second best record in the NFC. Second place Washington (2-2) would make the playoffs as the fourth Wild Card thanks to a better conference record than the four other teams with the same record. Philadelphia (1-3) owns the common opponents tiebreaker over the New York Giants who is 15th in the NFC (thank goodness for Detroit).

West is Best: The NFC and AFC West are each 11-5 after four weeks, while the NFC East is on pace to surpass last year’s 23 wins by week 13. Woe is the AFC South, which is a combined 4-12 and has three teams that have the early feel of 2-14 in them. The NFC owns an early 11-9 advantage (remember that with an extra nonconference game there will be 48 of them this year). 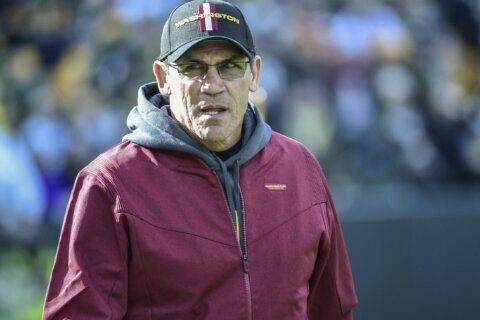 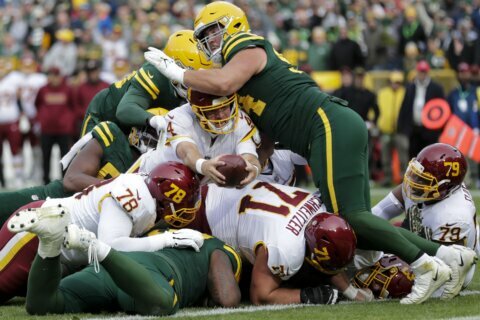 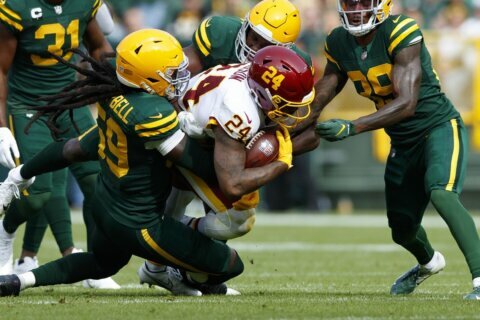