Bills safety Micah Hyde might have been speaking for the entire team and fan base in assessing Josh Allen and the offense’s sudden return to dominance.
Listen now to WTOP News WTOP.com | Alexa | Google Home | WTOP App | 103.5 FM

ORCHARD PARK, N.Y. (AP) — Bills safety Micah Hyde might have been speaking for the entire team and fan base in assessing Josh Allen and the offense’s sudden return to dominance.

“That’s the offense we know and love,” Hyde said, following a 43-21 win over the Washington Football Team.

Allen shook off his early season inconsistencies with a career-high-matching five touchdowns (four passing, one rushing), and his completion rate jumped from 56 through two games to 62. With 358 yards passing, he improved to 9-0 when topping 300, and the offense generated 481 yards after combining for just 685 in opening the season 1-1.

Now this was more like it, reminding receiver Cole Beasley of the dynamic attack which set numerous single-season passing and scoring records last year.

“We definitely found our rhythm today. The first two games we were struggling a little bit, even the last game winning 35-0,” Beasley said, referring to Buffalo’s win at Miami. “Today felt a lot more like what we expect and want it to be.”

After sailing a hard and high pass to running back Devin Singletary on Buffalo’s opening snap, Allen completed 32 of his next 38 attempts. The performance was capped by a 17-play, 93-yard third-quarter drive in which he went 9 of 10 and ended with a 5-yard TD to Emmanuel Sanders to put Buffalo up 33-14.

The eruption came during a week in which Allen acknowledged he was unhappy with his first two outings. Asked whether he needs to be more self-critical every week, Allen laughed and said, “Maybe.”

“I just care so much about my teammates. And my biggest fear is letting them down,” said the fourth-year starter who signed a six-year, $258 million contract extension last month.

He also cares for his coaches — offensive coordinator Brian Daboll, in particular. Daboll was in mourning after his grandmother died Wednesday, motivating Allen to provide the coach a lift.

Allen’s production against Washington was eerily similar to a 44-34 win over Seattle 13 months ago, when Daboll consoled the quarterback following the death of his grandmother.

Allen had four TDs (three passing, one rushing) against the Seahawks. His 263 yards passing against Washington in the first half on Sunday were the most since he had 282 against Seattle in the opening two quarters.

On Monday, Daboll appreciated his players’ support in what they said and how they performed.

“Look, I’m not going to sugarcoat it, it was special to me,” he said. “I lost a woman that was most important in my life. And those guys are just great people.”

Though born across the border in nearby Welland, Ontario, Daboll was raised in suburban Buffalo by his grandparents, who were married for 68 years before Ruth Kirsten died Wednesday.

“She’d be the first person I’d call after a game. If it didn’t go well, it wasn’t, ‘Oh, you’ll get ’em next time.’ It was a couple curse words in there and, ‘Pick your head up and do better,’” Daboll said. “Big hole in my heart. … But great memories of her. And I love her to death.”

Buffalo’s 29 first downs against Washington rank tied for 13th in team history, and the most since generating 31 three times last season. The Bills have 20 or more first downs in 19 consecutive games going back to the start of last season.

A small point in a game the Bills forced three turnovers and limited Washington to 290 yards, but Buffalo’s defense was unable to bring down Antonio Gibson on a key play. The running back converted a short pass into a 73-yard TD to cut Buffalo’s lead to 21-7 in the second quarter. It was the longest play from scrimmage by an opponent since Andy Dalton completed a 77-yard pass to A.J. Green in a 20-16 loss to Cincinnati on Oct. 8, 2017.

Sanders has finally developed a connection with Allen. After catching six passes on 14 targets for 100 yards in his first two games, Sanders caught five of six attempts thrown his way for 94 yards and two touchdowns.

“I think the first two games, obviously, wanted it to pop out. Well, it popped today,” Sanders said. “Today the experience of hanging 40-plus points up, it was a great day to be a Bill.”

Isaiah McKenzie’s tentativeness in the return game was costly. His failure to field Dustin Hopkins’ short kickoff led to Hopkins recovering the ball at the Buffalo 24, which led to Washington scoring to cut Buffalo’s lead to 21-14.

S Jordan Poyer was sidelined late in the game and spotted wearing a protective boot on his left foot. Coach Sean McDermott listed him day to day.

After facing his former mentor in Washington coach Ron Rivera, Bills coach Sean McDermott goes up against former colleague David Culley, the Houston Texans’ first-year coach. Culley spent the 2017 and ’18 seasons on McDermott’s staff coaching quarterbacks. The two first worked together on Andy Reid’s staff with the Philadelphia Eagles from 1999-2010. 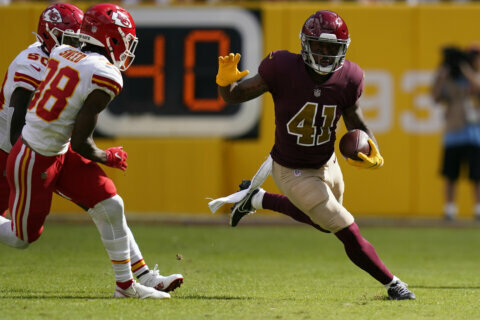 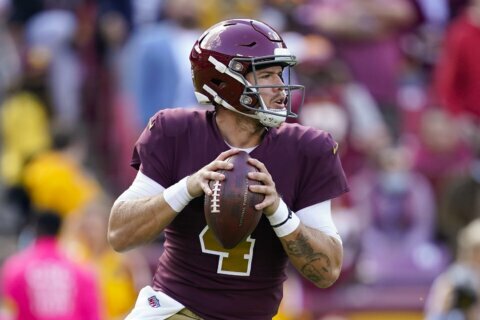 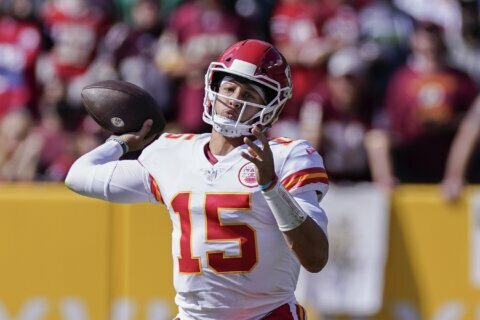