Coronavirus News: The nuance of dealing with COVID-19 | New cases in Montgomery Co. | 'Is It Normal Yet' Podcast: A perfect storm | Latest cases in DC region
Home » Washington Football » This Curtis Samuel update…

This Curtis Samuel update from Ron Rivera was not too encouraging

Curtis Samuel was literally back on the Ashburn fields at Washington’s headquarters on Sunday, as he was spotted walking with Terry McLaurin after yet another practice. He wasn’t in the lineup, though — once again — and Ron Rivera’s update on the talented wideout wasn’t exactly positive.

“There’s no timetable for Curtis,” Rivera told reporters in his daily press conference. “You’d love for him to catch a few reps maybe in the last preseason game, but we’re not going to rush him out there. He’s coming back, he’ll be healthy, he’ll be ready to roll.”

Samuel is still battling a groin injury that first popped up during OTAs back in late May. The issue forced him to miss all three of Washington’s subsequent minicamp sessions and, when the Burgundy and Gold commenced training camp at the end of July, pushed him to the PUP list.

He’s also been in COVID protocols since July 29, just to further complicate the matter.

Now, Rivera has tried to downplay his stress level when it comes to Samuel’s status, but the lack of timetable on the receiver’s return plus Rivera’s statement that the team would be glad to get Samuel some work in the final preseason matchup when the Aug. 12 exhibition opener has still yet to be played adds up to a very concerning situation.

Washington’s offense is expected to be far better in 2021 than it was in 2020, with Samuel representing a major reason for that optimism.

Yes, rookie Dyami Brown has been exceptional in camp and Adam Humphries is savvy in the slot, but Samuel, theoretically, should be a perfect complement to Terry McLaurin and really increase the entire unit’s overall ceiling. He can’t do that, however, in street clothes.

As a counter to this building worry, Rivera could point to the fact that Washington’s Sept. 12 opener against the Los Angeles Chargers is still 35 days away, which is a considerable amount of time for Samuel to get better.

Yet if Rivera is already hoping to re-introduce Samuel for the third preseason tilt, which is Aug. 28 at FedEx Field against the Baltimore Ravens, then the timeline gets much less friendly.

“We’re going to ease back into it because, again, he knows the system, he’ll pick it up again very, very quickly,” Rivera said. “It’ll really be about him building his rapport with the quarterbacks.”

The coach did his best to deliver the comments with a relaxed tone and, for the most part, he kept his cool. Maybe this really is precautionary and Samuel will be ready to go in five weeks after all?

Unfortunately, it’s just getting more difficult for everyone on the outside to keep that same calm manner with one of the team’s biggest offseason acquisitions still on the sideline. 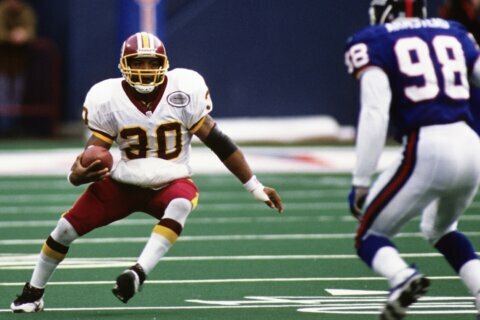